Militiamen planned to hit Michigan governor with 800,000-volt Taser and blow up a bridge to slow cops down as video emerges of them practicing tactical training exercises with semi-automatic weapons

Among the evidence that the US Attorney’s Office has compiled against the people suspected of plotting to kidnap and kill Michigan Gov. Gretchen Whitmer are chilling training videos and text messages sent between the alleged conspirators.

The Western District of Michigan US Attorney’s Office released a wealth of photos, videos, phone calls and encrypted messages that they are planning to use as evidence against the six men who have been charged by the federal government in the Whitmer kidnapping plot.

The evidence includes videos of the men training with semi-automatic weapons and demonstrating a Taser, which they allegedly planned to use in the kidnapping plot.

On Friday, a federal judge ruled that five Michigan men would stand trial on conspiracy to kidnap charges. 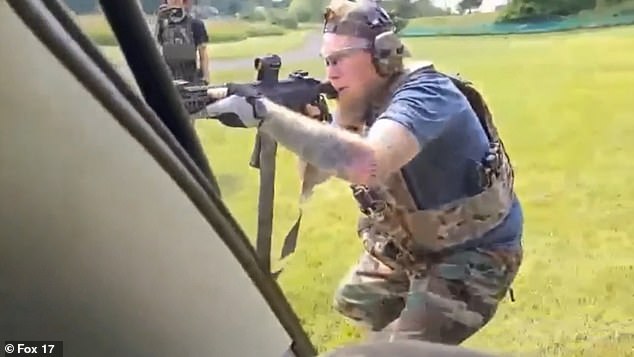 The US Attorney’s Office released video and text message evidence in their case against six men who face federal conspiracy to kidnap charges against Michigan Gov. Gretchen Whitmer 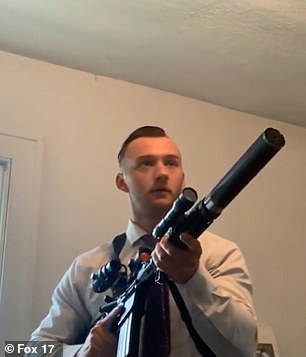 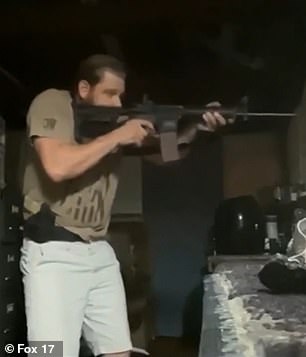 The judge also ordered that a sixth man – Barry Croft, 44, of Bear, Delaware – be transferred from his home state to Michigan to face the same kidnapping charge, according to the Detroit News. 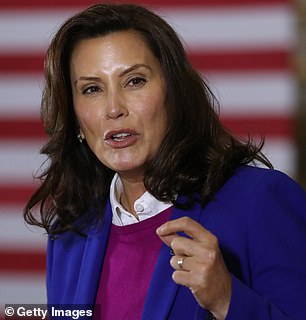 Gov. Gretchen Whitmer was supposedly targeted by the alleged conspirators because she was acting with ‘uncontrolled power’ during the coronavirus pandemic

Video released by the US Attorney’s Office showed several of the men facing federal charges carrying out what appeared to be a tactical training exercises, involving exiting a PT Cruiser and shooting at an unseen target.

Additional videos showed men doing split-second ammunition reloads and boasting about what they would do if things go wrong.

One video also shows accused conspirator Fox smiling as he sets off a Taser, identified as a 800,000-volt model, according to the Detroit News.

Earlier in October, Fox had told others in the group that he had bought a Taser, which the group had discussed using in the supposed kidnapping plot, according to a court document obtained by KVIA.

It’s unclear if the Taser in the video and the Taser Fox allegedly discussed are the same one, however.

Caserta, meanwhile, can be seen talking to the camera and saying: ‘If this s**t goes down, if this whole thing, you know, starts to happen, I’m telling you what dude. I’m taking out as many of those motherf**kers as I can.’

He goes on to say that he’s ‘sick of being robbed and enslaved by the state,’ apparently referring to police officers.

He then tells whoever was meant to watch the video that if they happen come across the supposed robbers and enslavers while they’re doing ‘recon,’ that ‘you either tell them to go right now or else they’re gonna die, period’ because ‘they are the f**king enemy, period.’ 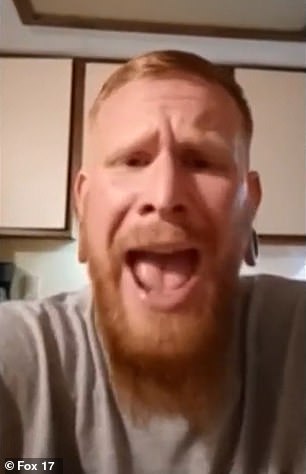 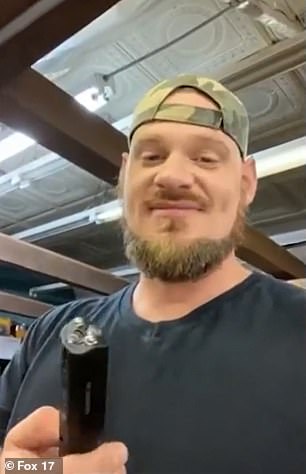 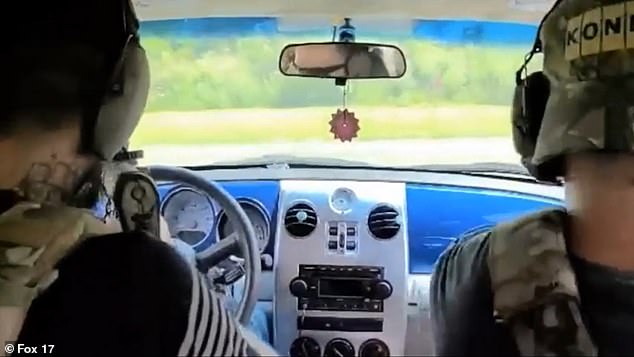 In the video showing the alleged tactical training video, the men were seen exiting a PT Cruiser 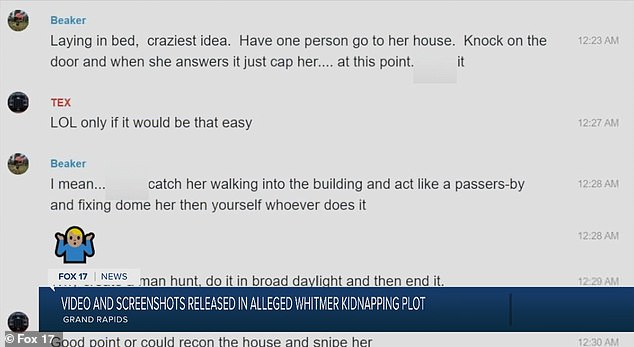 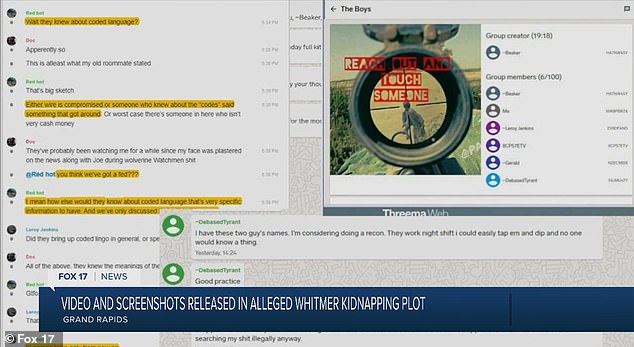 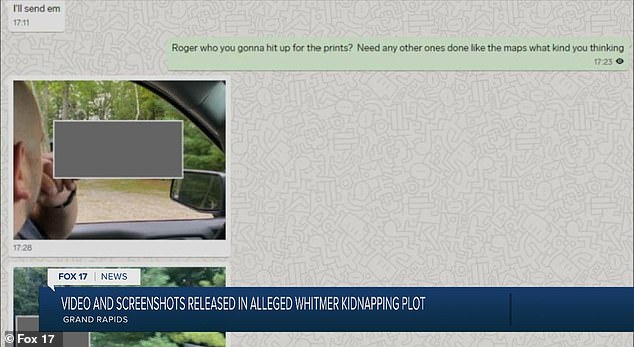 Text messages that were released by the government were said to have been encrypted text messages that the suspects supposedly sent each other over the last few months regarding their alleged kidnapping plans.

‘Have one person go to her house. Knock on the door and when she answers it just cap her,’ reads one message, obtained by Fox 17.

Another text message included emojis that suggested a plan to blow up a bridge as a way of slowing down police who might be responding to the kidnapping.

The alleged conspirators also texted each other about stashing med kits and buying getaway vehicles, while saying that they have ‘focused righteous anger backed by truth and morality.’

One message noted: ‘When it comes there will be no need to try and strike fear through presence. The fear will be manifested through bullets.’

Other text messages, obtained by Local 12, show the alleged conspirators sharing stories about being ‘robbed’ – pulled over – by police officers who ‘illegally’ searched their cars and planting Xanax in their car for the next time he gets pulled over.

At one point, one of the alleged conspirators says he has the name of the officers who pulled him over and that it would be easy to ‘tap’ them and get away unseen because they work nights. 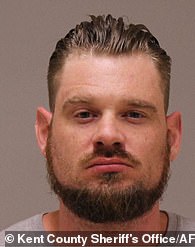 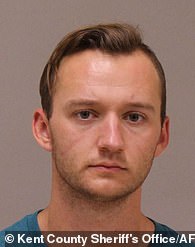 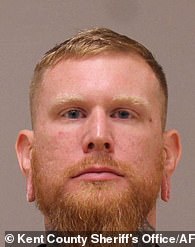 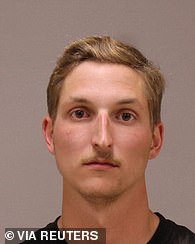 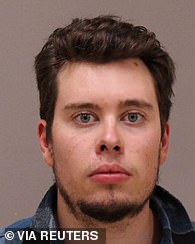 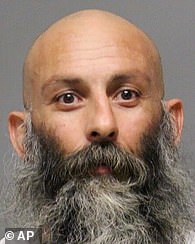 Also among the text messages were maps and what appeared to be surveillance pictures of bridges and homes.

Authorities said the images were taken on properties that Whitmer owned.

If convicted of the federal charges, the men face up to life in prison.

Seven other men face firearm and terrorism charges in state court in connection with the alleged Whitmer kidnapping plot.

Gov. Whitmer announced last week that the FBI had foiled the alleged kidnapping plans against her.

The FBI made the arrests following investigations that involved confidential sources, undercover agents and clandestine recordings.

The accused conspirators were said to be members of antigovernment paramilitary groups who saw kidnapping Whitmer as a way to retaliate against what they saw as her using ‘uncontrolled power’ during the coronavirus pandemic.

Authorities said that four of the men planned to meet last week to pay for explosives and exchange tactical gear.