Chicago mobster Frank Cullotta, whose 1970s exploits in Las Vegas inspired the film Casino – for which he acted as a consultant – dies of coronavirus aged 81

An infamous Chicago-born mobster whose exploits in Las Vegas in the 1970s inspired the film Casino has died of coronavirus and other complications, aged 81.

Frank Cullotta in his later years gloried in his past, running his own YouTube channel and organizing both a ‘Vegas Mob Tour’ and a Casino Tour, reveling in the 1995 Scorcese film.

Cullotta was a consultant on the film, which told the story of his associate Anthony ‘The Ant’ Spilotro, played by Joe Pesci.

Cullotta also had a brief cameo, playing a hit man. 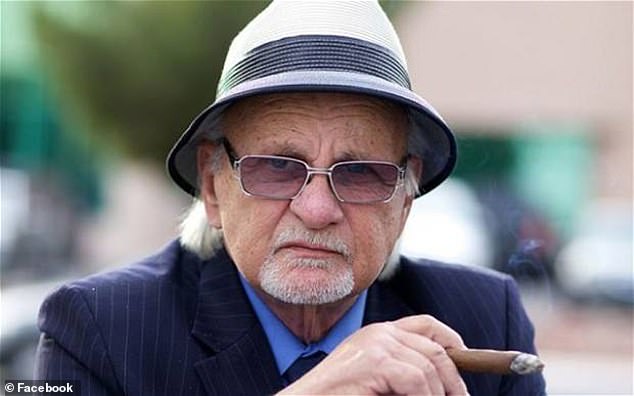 Frank Cullotta, pictured in his later years, was a Chicago mobster. He died on Thursday aged 81 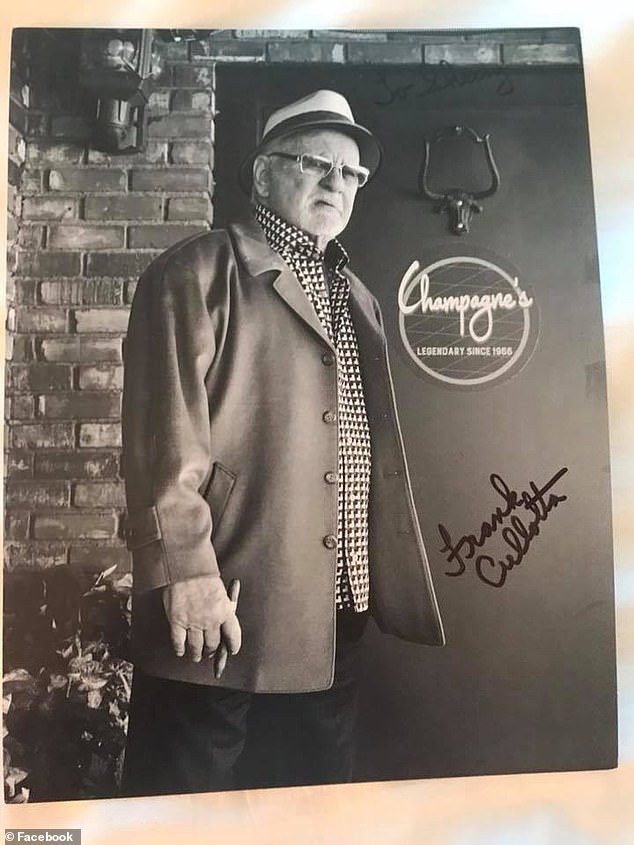 Cullotta in later life ran ‘Vegas Mob Tours’ for tourists, reminiscing about his life as a gangster 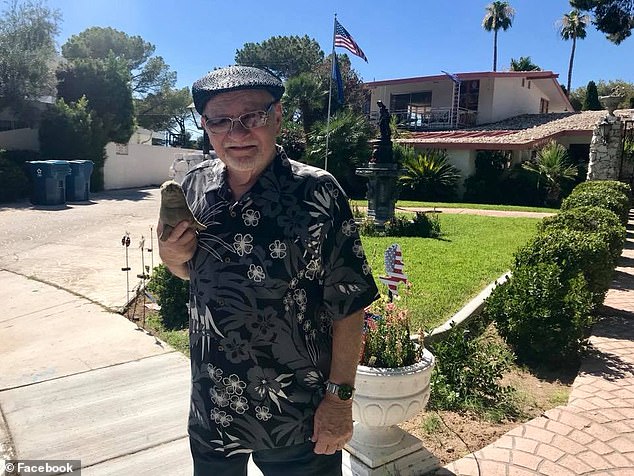 ‘It’s like fighting a war,’ he said, in a 2015 interview with the Las Vegas Sun. ‘I hate to use the military as a comparison, but that’s how it felt; I was carrying out an order.’

He said he enjoyed telling stories of his past.

‘People are fascinated by me, and I understand that, but there’s a big difference in me today than there used to be.

‘I mean, I used to be surrounded by celebrities, showgirls, politicians, a lot of money, people wanting to attach themselves to you. But it came at a price.

‘I lost my freedom. I had to change my life completely.

‘But I have paid my debt to society. I’m under no pressure. I used to have headaches all the time, from tension, and I don’t have headaches anymore. I’m clean today. I’m very clean.’

The mafia operator is best known for his membership of a group of Las Vegas thieves known as the ‘Hole in the Wall Gang’, and his life-long friendship with Spilotro. 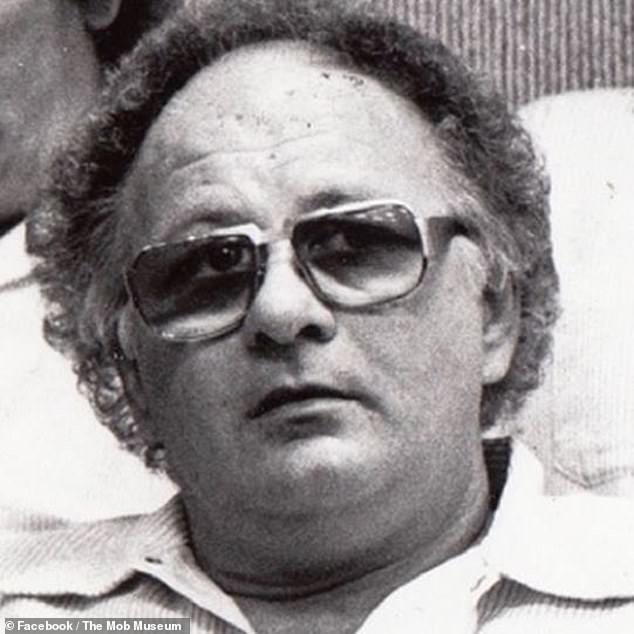 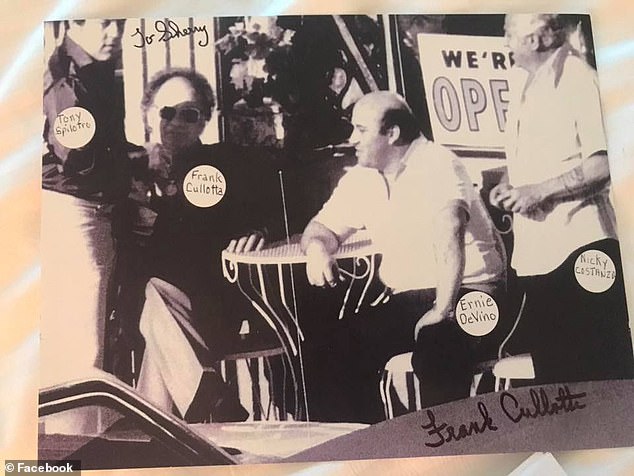 Cullotta and Spilotro, pictured with other mafia figures, in a photo on Cullota’s Facebook page 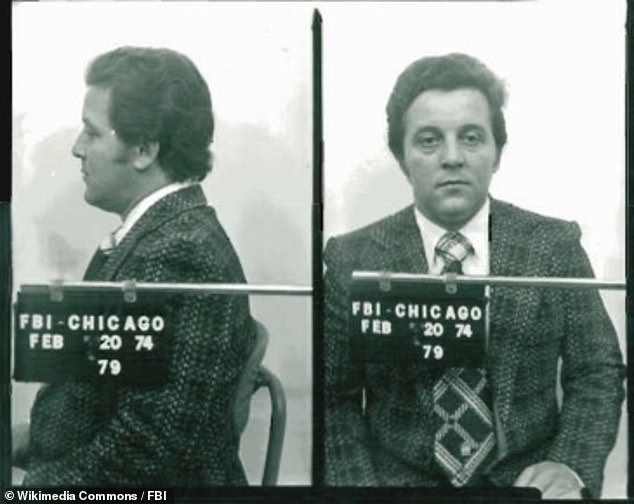 Anthony ‘Tony the Ant’ Spilotro was a childhood friend of Cullotta’s, until he turned on him

Spilotro and Cullotta’s first big ‘score’ was in 1957, when they used sledgehammers, acetylene torches, and other heavy equipment tools to break into the basement of a bank over a weekend – walking away with $50,000 each.

In 1971 Spilotro, a member of Chicago’s crime ‘Outfit’, moved to Las Vegas to run his organization’s operations there.

During the 1970s, the Outfit moved into the Las Vegas casino business after an agreement with the East Coast Families to take over all rackets in Atlantic City.

Chicago, being the leader of the Midwest cabal of crime families, led the way into Vegas, and Spilotro was at the forefront. 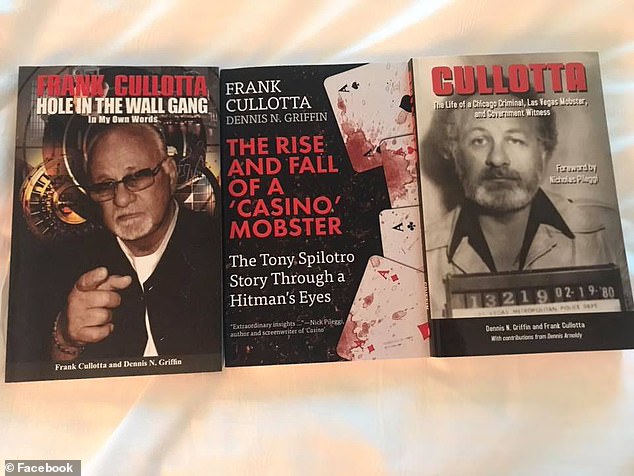 Nevada’s regulation of the casino industry at the time was sketchy, and the FBI had not yet ramped up its Las Vegas office – leaving room for mobsters to enjoy secret ownership of casinos and to skim the profits.

Another of their childhood friends, Frank ‘Lefty’ Rosenthal, began running a series of casinos – inspiring the character of Ace Rothstein, played by Robert De Niro.

Cullotta by 1979 was putting together several of his old Outfit comrades into a burglary gang, which specialized in drilling into the walls of a building to avoid the alarms on doors and windows.

The gang targeted homes and businesses all over the south west, sometimes making their own ‘hits’, and sometimes carrying out Spilotro’s orders.

Cullotta ran the day-to-day operations and made sure a percentage from each ‘score’ was given to Spilotro, in the usual Outfit protocol.

Spilotro would also ask Cullotta to carry out murders for him.

One of the most famous was the killing of Jerry Lisner, who was feeding information to police about Cullotta and Spilotro’s activities.

This scene was depicted in the Scorsese film.

During the filming of this scene, Scorsese reportedly complained that it did not feel right.

Cullotta, legend has it, told him that they were not doing it right.

Scorsese asked: ‘Who are you?’

Cullotta replied: ‘I am the guy who done it.’

Cullotta, wearing a hat, made a cameo in the film Casino, shooting dead an informant 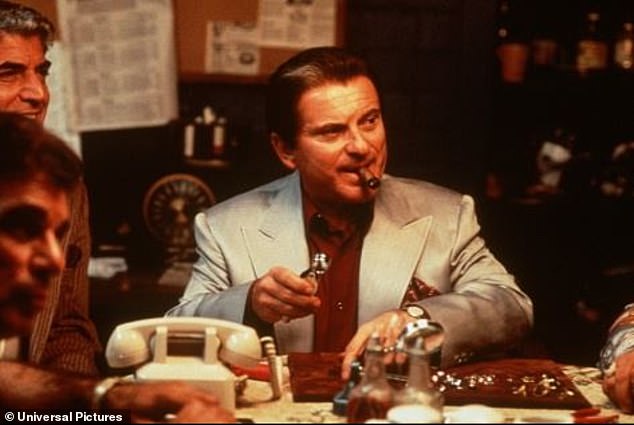 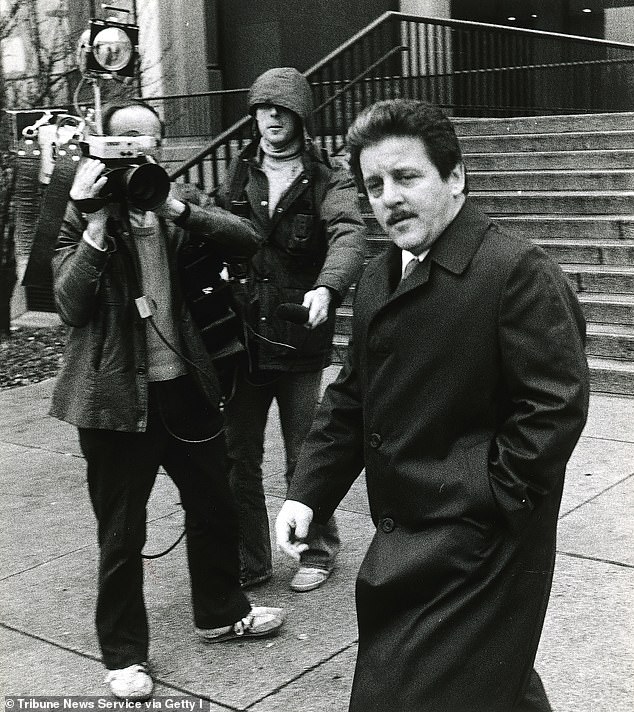 Spilotro, pictured in 1983, was the inspiration for Joe Pesci’s character in the film Casino

The end came on the evening of July 4, 1981, when, using the Independence Day celebrations as cover, the Hole in the Wall Gang set out to rob Bertha’s Gifts.

With the noise of fireworks and traffic in the background, several of the gang members used cutting torches and sledge hammers to smash through the ceiling of Bertha’s in anticipation of hoisting up as much as $1 million.

In vehicles below, Cullotta and two other gang members, including ex-cop Joe Blasko, all armed with police scanners, were serving as lookouts.

But they didn’t know that they had a mole in their group, who had tipped off FBI agents and Metro Police intelligence officers.

All three of the burglars were taken into custody without incident – and without having a chance to steal anything.

At the same time, agents on the street arrested Cullotta and the other lookouts.

‘We felt a real sense of accomplishment,’ said Dennis Arnoldy, a former FBI agent, in 2005, speaking to KNPR. 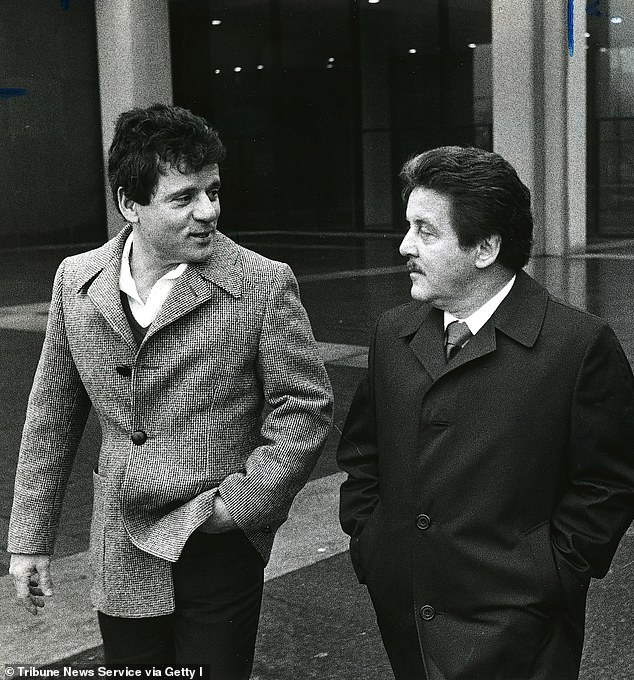 Spilotro (right) and his brother Tony, pictured in March 1983. The pair were killed in 1986

‘You often plan things, and they don’t work out the way you want them to. But this one worked out perfectly. It was damn good.’

Cullotta was in custory, and Spilotro came under intense federal and local law enforcement attention.

By April 1982 the pressure of the Bertha’s bust had rattled Cullotta, who feared that Spilotro wanted him dead.

He decided to testify against his longtime boss, and agreed to admit to two murders.

Cullotta gave agents a gold mine of information – including a blow-by-blow account of how he killed an informant for Spilotro in 1979.

His testimony led to racketeering indictments against Spilotro and his top lieutenants in 1983.

‘He was the glue that put it all together for us,’ said retired FBI agent Mark Kaspar, who pursued Spilotro for a decade.

‘He corroborated all the evidence we needed to move forward with indictments.’

Arnoldy, the lead agent in the racketeering case, calls Cullotta ‘the single-most important witness’ in the breakup of Spilotro’s organization.

Authorities suspected Spilotro of participating in as many as two dozen murders, yet he was never convicted of homicide.

The racketeering case ended in a mistrial in April 1986, much to the dismay of FBI agents.

But two months later, as the retrial was about to get under way, the bodies of Spilotro and his younger brother Michael turned up in an Indiana cornfield.

‘In the end Spilotro was taken care of by his own people,’ said Kaspar. 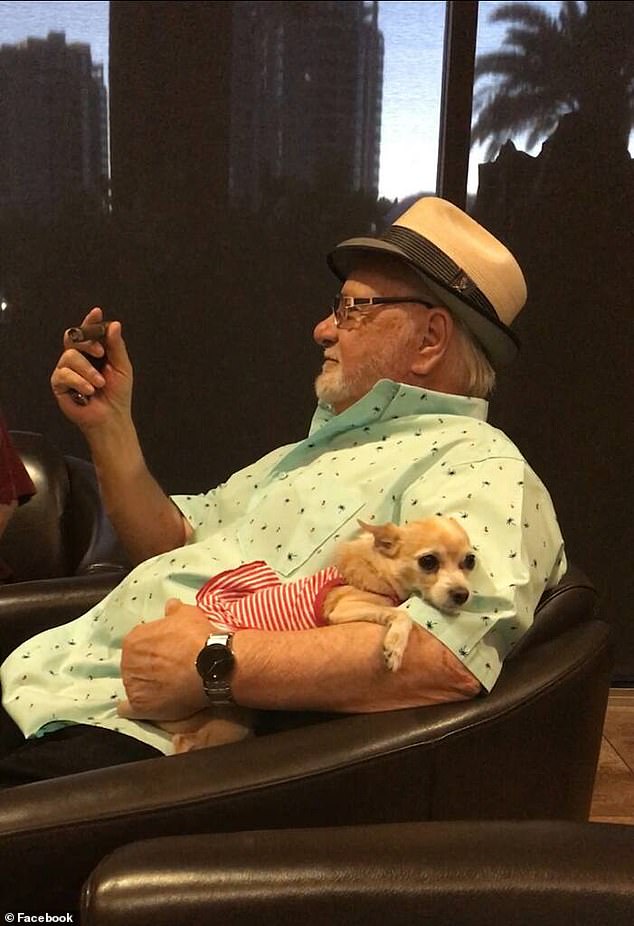 Cullotta was sentenced to eight years, and then entered the Witness Protection Program; moving away, assuming a new name and running a small business.

In the mid-’90s, when he felt comfortable he would not be killed, he left Witness Protection and resumed living as Frank Cullotta.

The five-hour mob tours ran monthly and cost $180, including a champagne toast and pizza dinner.

His YouTube channel, Coffee with Cullotta, featured the aging mobster reminiscing about his life – ‘revealing things that have not been revealed,’ he promised.

Author Dennis Griffin, who worked with Cullotta on four books, said he asked Cullotta many times over the years about how he reconciled his previous life with his later life.

‘Actually, he told me he had found God,’ Griffin told the Las Vegas Review-Journal.

‘He believed in God and said he had made peace with God. He knew he had been a bad guy who had done bad things but he addressed the issues and said he was comfortable with the way he was now.’

Griffin added: ‘When I met Frank I made the error of using the word ‘informant.’

‘He was adamant he was not an informant. He was a government witness. He never wore a wire and never went out trying to entrap anybody. So there was a distinction in Frank’s mind.’

Geoff Schumacher, vice president of exhibits and programs for the Mob Museum, said he was, within limits, ‘a really nice guy.’

‘You had to remember in the back of your mind he did some very bad things,’ Schumacher told the paper.

‘He committed murders. He committed robberies and burglaries. He beat people up. He was generally not someone who most people would want to associate with.

‘But as long as you understood that, he was a gentleman. He was fair-minded. He always wanted to make sure people were taken care of.

‘And he was very forthcoming and honest about what he had done.

‘Also, in his later years, he definitely showed remorse.

‘Not every killer showed remorse of what they did. But he did.’