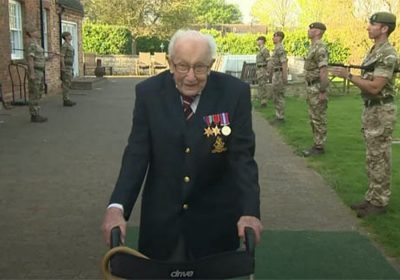 Captain Sir Tom Moore has tragically died, but he will be forever known for his heroic fundraising achievements.

The 100-year-old died today after he contracted coronavirus and was admitted to hospital.

He was unable to receive the vaccine after succumbing to pneumonia.

The former British Army officer, affectionally known as Captain Tom, became the nation’s hero at the start of the Covid-19 pandemic.

His humble goal was to raise £1,000 by his 100th birthday. But, after attracting receiving millions of donations, he managed to raise over £32m by the end of the day.

Footage seen above shows the moment he finally completed his 100th lap.

Soldiers from the 1st Batallion of the Yorkshire Regiment – of which he served in in WW2 – give him a guard of honour as he reaches the finish line.

BBC Breakfast were on hand to film the moment and interviewed him moments after. Asked how he was feeling, he said: “Fine, I mean I’m surrounded by the right sort of people so I’m feeling fine – I hope you’re all feeling fine too.”

The performance was soon made into a digital single featuring the NHS Voices of Care Choir and the army veteran’s spoken words.

It went on to make the UK number one. In recognition of his service, Captain Moor was also knighted by the Queen.

“It is with great sadness that we announce the death of our dear father, Captain Sir Tom Moore,” they said.

“We are so grateful that we were with him during the last hours of his life; Hannah, Benjie and Georgia by his bedside and Lucy on FaceTime. We spent hours chatting to him, reminiscing about our childhood and our wonderful mother. We shared laughter and tears together.

“The last year of our father’s life was nothing short of remarkable. He was rejuvenated and experienced things he’d only ever dreamed of.

“Whilst he’d been in so many hearts for just a short time, he was an incredible father and grandfather, and he will stay alive in our hearts forever.

“The care our father received from the NHS and carers over the last few weeks and years of his life has been extraordinary. They have been unfalteringly professional, kind and compassionate and have given us many more years with him than we ever would have imagined.

“Over the past few days our father spoke a great deal about the last 12 months and how proud he felt at being able to leave behind the growing legacy of his Foundation.

“We politely ask for privacy at this time so we can grieve quietly as a family and remember the wonderful 100 years our father had.”