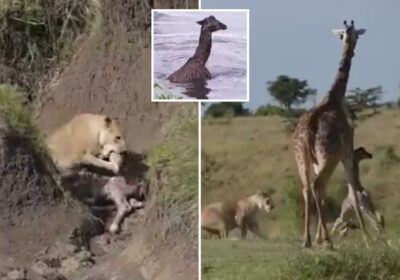 HEARTBREAKING footage shows the moment a giraffe mum accidentally pushes her newborn calf over a riverbank while trying to save it from a lioness.

The baby – just hours old – is too weak to climb back up the cliff but miraculously survives a mauling by the hungry predator. 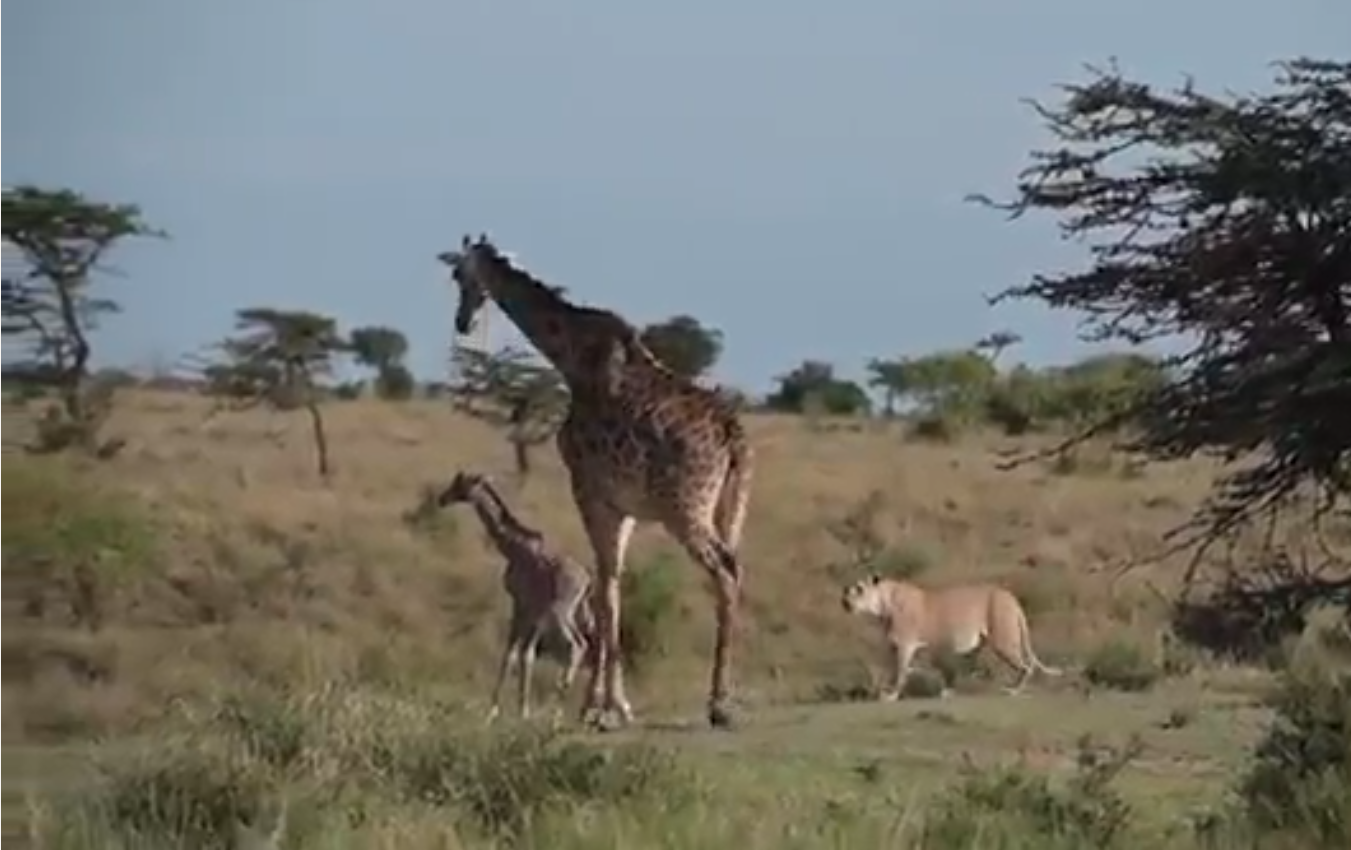 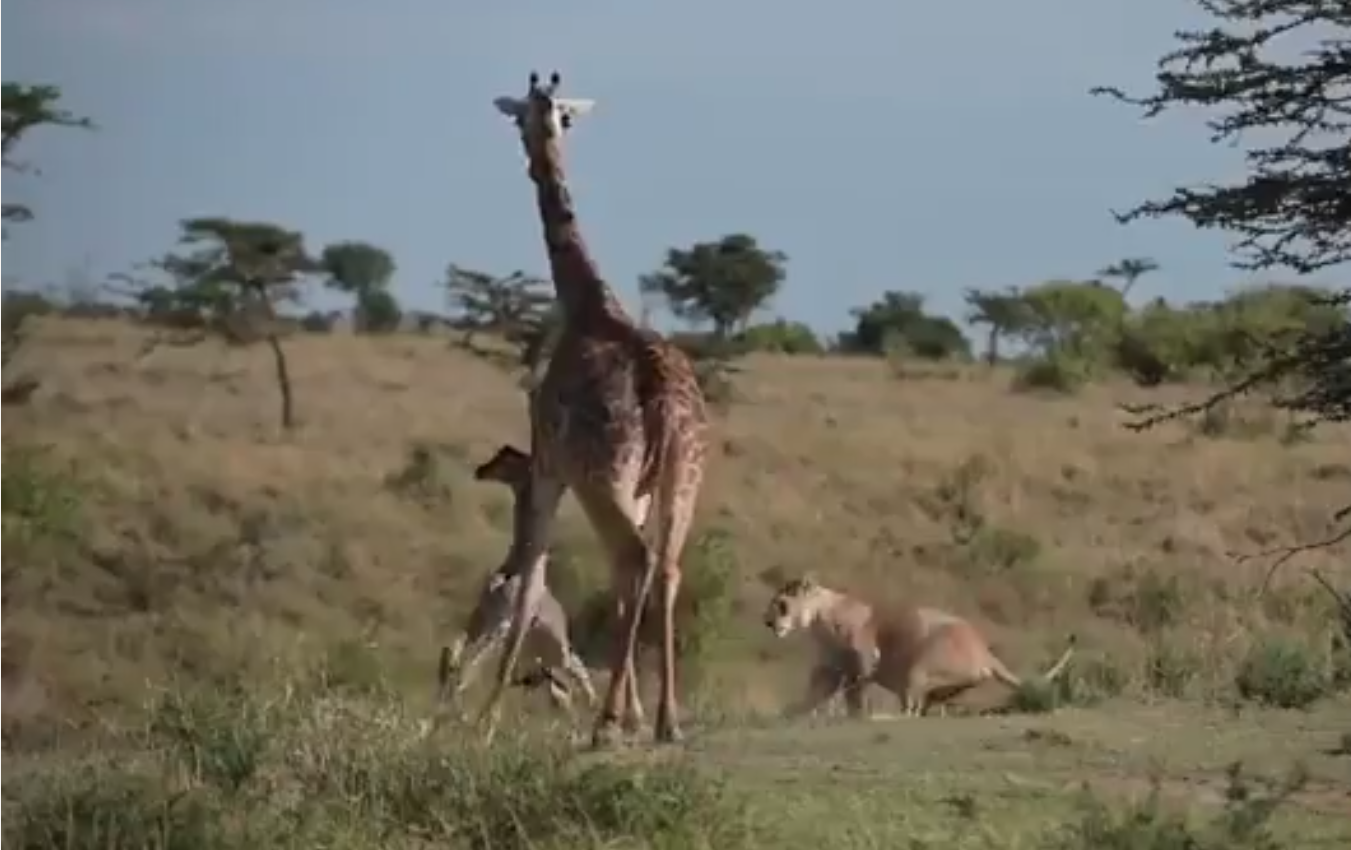 Shocking images show the youngster with its head in the lion's jaws and then being dragged by the neck across the riverbed.

Its blinking eyes and soft breathing are the only signs it is still alive.

The frantic mum is then seen repeatedly chasing off the lioness from the limp calf in a five-hour battle for survival.

Incredibly, the calf was later able to get back on its feet and ran into the water, with the lioness still lurking nearby.

But after the exhausting struggle – and no milk from its mother – it was eventually unable to hold its head up and drowned.

The incredible scenes were captured in the Masai Mara, Kenya, by safari guides Don Heyneke and Rustom Framjee.

Don, 30, told the safari website Latest Sightings: "Thirty minutes after being born, giraffes are already able to walk with only minimal stumbling, and within ten hours they are able to run.

"Unfortunately for this young calf, a hungry lioness and hyena showed interest in the calf right after it was born."

Don said the hyenas quickly lost interest, but the lioness kept stalking the herd of giraffe for four miles.

He said: "The newborn calf was knocked over several times by its mother while trying to escape the lioness.

“After walking 6km, the giraffe and her baby, who at this point had not even had a sip of milk in its life yet, reach a dead-end caused by a riverbed.

"The lioness creeps up to them, thinking this is the finale to an already intense series.

“The mother tried to protect her calf from the lioness and panicked – accidentally bumping the new-born down a cliff.

"The newborn calf was now stuck in the riverbed. The mother tried to coax the young calf out but it was too weak to climb the bank.

“The calf lay down and at this point stood no chance against the apex predator who took the opportunity to grab the calf and carry it towards the water.

“The mother did her best to protect her newborn calf and chased the lioness away multiple times, and at this point we thought the calf was 100 per cent dead.

"To everyone’s surprise, it stood up but not for very long as the calf ended up finding safety in the river where it fell asleep from exhaustion.

"The baby giraffe, with a fight for survival like no one has ever seen before, drowned.”

Last week dramatic pics showed two 17ft male giraffes using their necks to whack each other in a bruising battle for supremacy in mating season.

And last month video showed a tough giraffe shrugging off an attack by six lions as they bit its legs and back hoping for a feast. 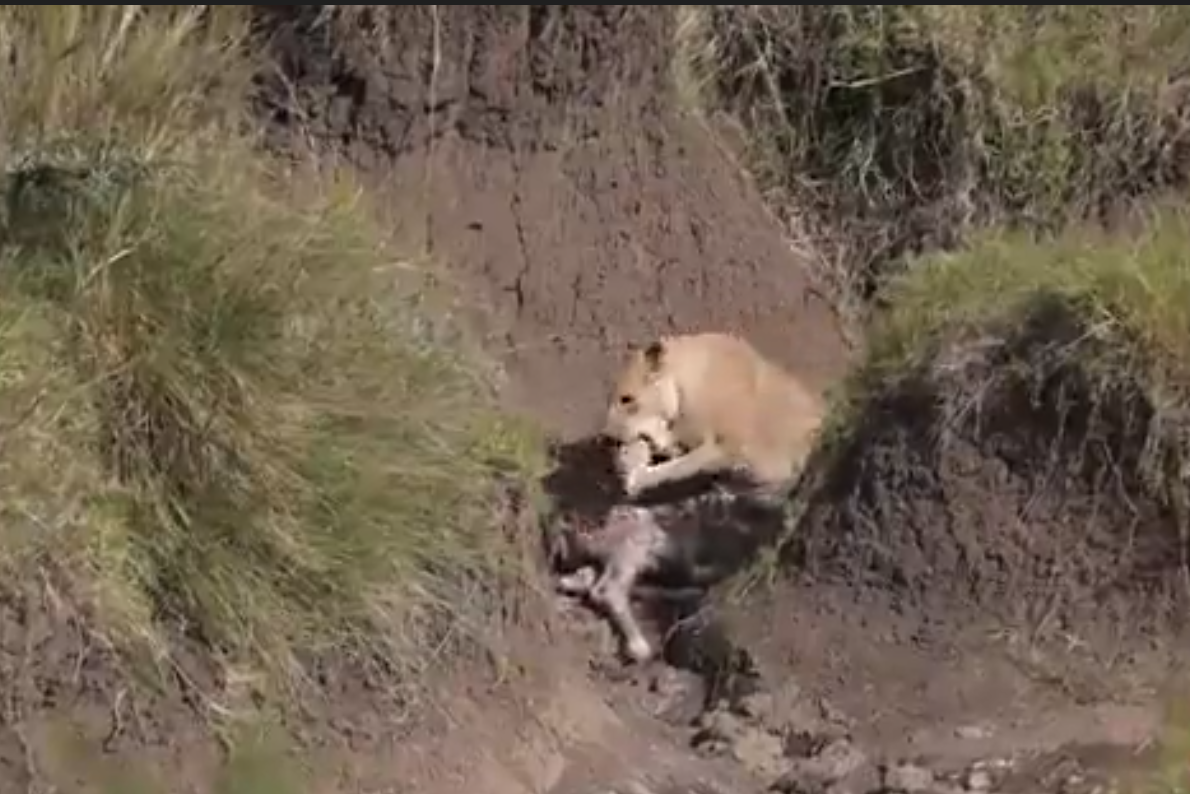 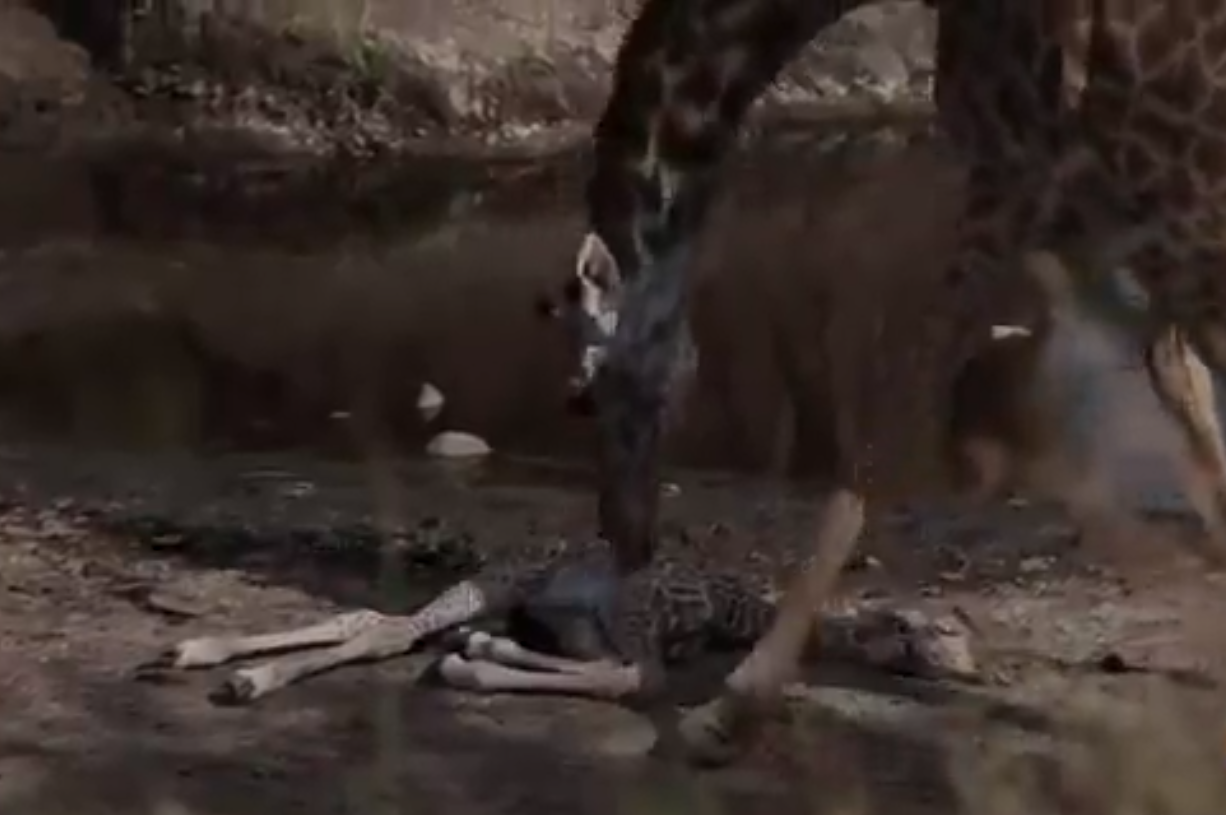 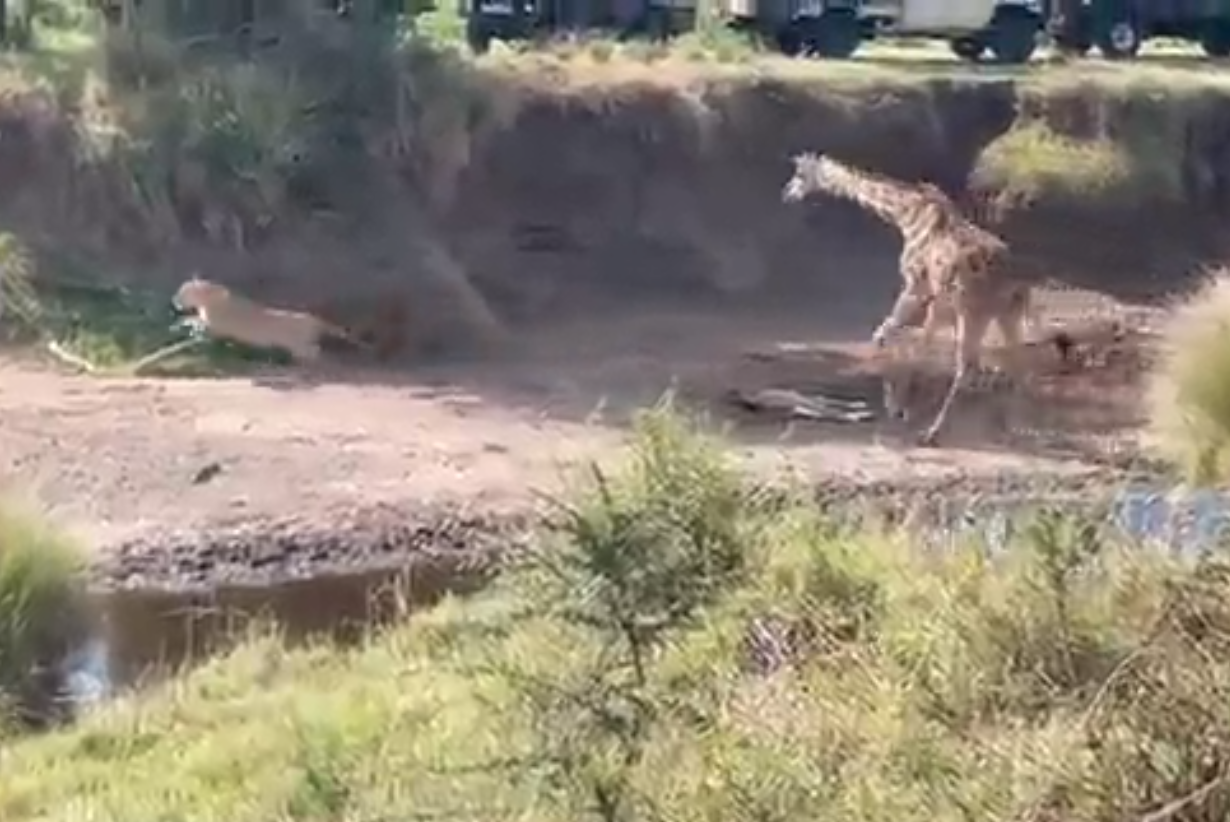 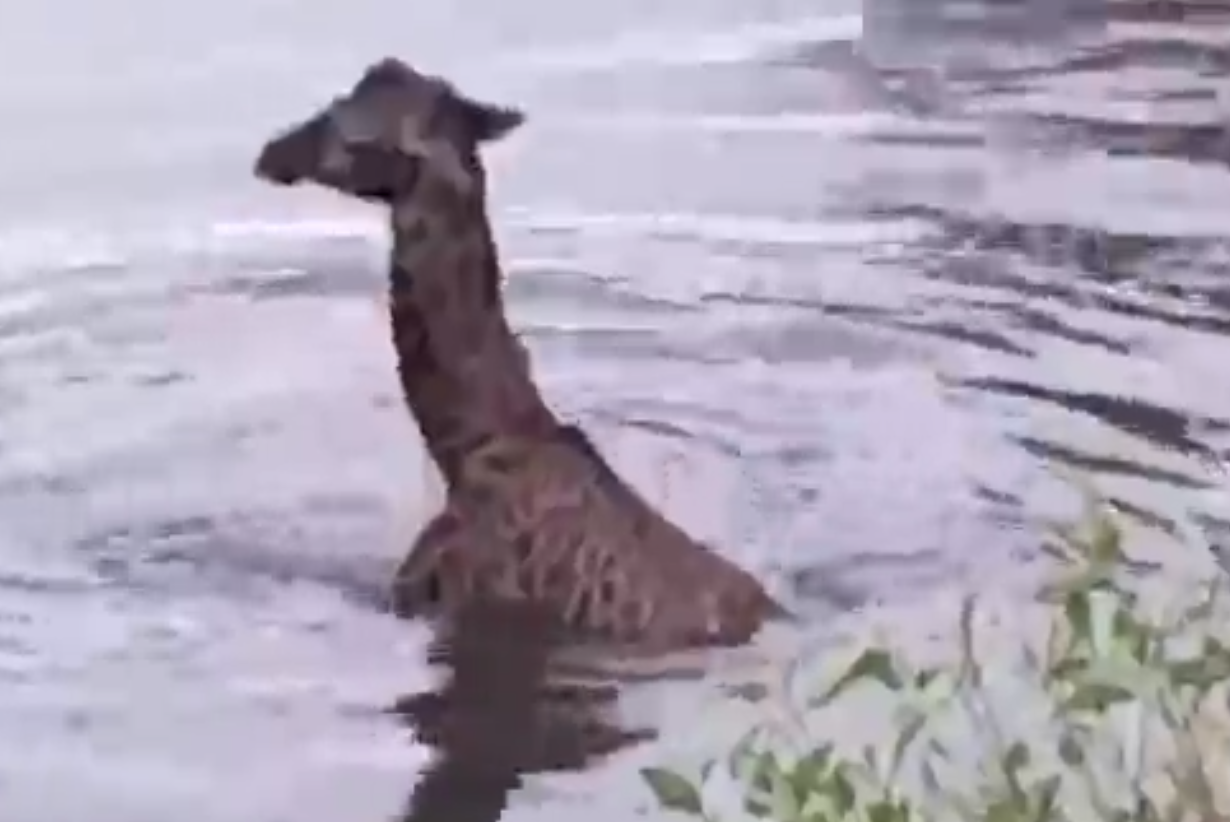 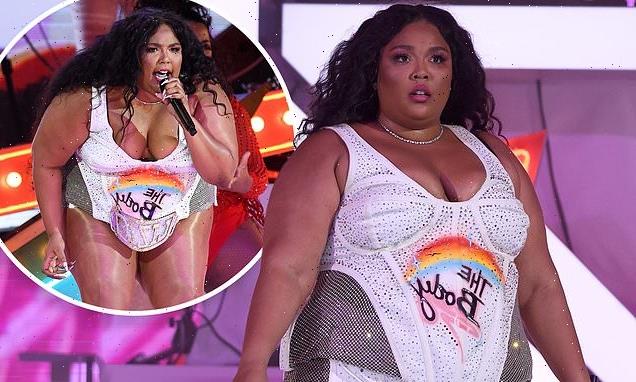