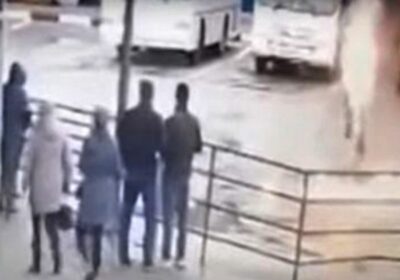 A man in Russia set himself on fire in a bid to avoid being sent to the front lines in Ukraine, local news reported.

Video footage taken during the shock incident shows the man catching fire before running around as horrified witnesses watch on.

The man was reportedly heard shouting "I don't want to go to the front", seemingly referring to the front lines of the Ukraine war – as well as laughing and "behaving inappropriately", according to Russian news outlet YA62.

He was seen dousing himself in liquid before being rushed to hospital following the event, where it was discovered that 90% of his body was covered in burns and he was treated with oxygen.

This comes following Putin's announcement of a partial mobilisation of Russian army reserves and conscripts as the war in Ukraine continues.

The Russian dictator announced last week that he would be sending 30,000 more troops into battle including Russian civilians.

"Today our armed forces are operating across a frontline that exceeds 1,000 km, opposing not only neo-Nazi formations [in Ukraine] but the entire military machine of the collective West," he said.

"In such a situation, I consider it necessary to make the following decision, which is fully appropriate to threats we face."

He also threatened the West with nuclear war, claiming Russia had "lots of weapons to reply" to apparent "blackmail" by the West.

The dictator said: "If the territorial integrity of our country is threatened, we use all available means to protect our people – this is not a bluff."

The war in Ukraine has not been going according to Putin's plan, according to reports emerging from the besieged nation.

The region of Kharkiv has been completely recaptured, leading to the discovery of mass graves and makeshift torture chambers.

A heartbreaking 450 bodies have been found in a mass grave in the region, with many of them displaying signs of torture.

Ukraine's First Deputy Minister of Internal Affairs Yevheny Yenin said: "We continue to find bodies with signs of violent death – there are many of them.

"These include broken ribs and cracked skulls, men with bound hands, broken jaws, and severed genitalia."