Mother reveals ‘living nightmare’ with daughter sleeping in a CUPBOARD A mother-of-four is enduring a ‘living nightmare’ as her family struggles to cope in a cramped two-bedroom home – with her daughter sleeping in a cupboard.

Leah Edwards, 31, and her partner Tom Baker, 29, are desperate to move from their tiny council house in the Bransholme area of Hull in East Yorkshire.

The couple share the property with the three children they have had together along with Miss Edwards’s teenage son from a previous relationship. 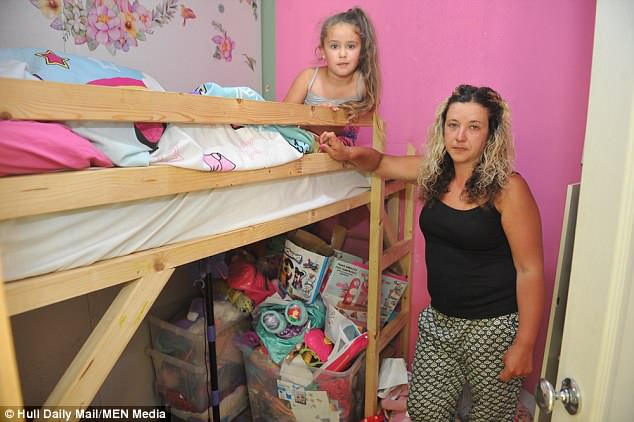 Leah Edwards, 31, pictured with her seven-year-old Aalayiah, who is staying in a makeshift room which used to be a cupboard at the home in the Bransholme area of Hull in East Yorkshire

The three boys, aged one, eight and 13, have to share a room, while the girl Aalayiah, seven, is staying in a makeshift room which used to be a cupboard.

Her room has no windows and had to be knocked through three years ago – something which led to Miss Edwards’s own room becoming reduced in size.

The family are constantly getting in each other’s way due to their tight living layout – and Miss Edwards said arguments regularly break out between her children.

The mother, who is suffering from stress, said: ‘My head’s gone. It’s stressing me out.

‘We are all cramped in, the boys are arguing all the time and my eldest son needs his space. I’ve had to make a cupboard into a room for my daughter.

‘She was in with me in my room but I needed space too. It’s beyond a joke. All my seven-year-old girl does in that room is go to sleep in the bedroom. 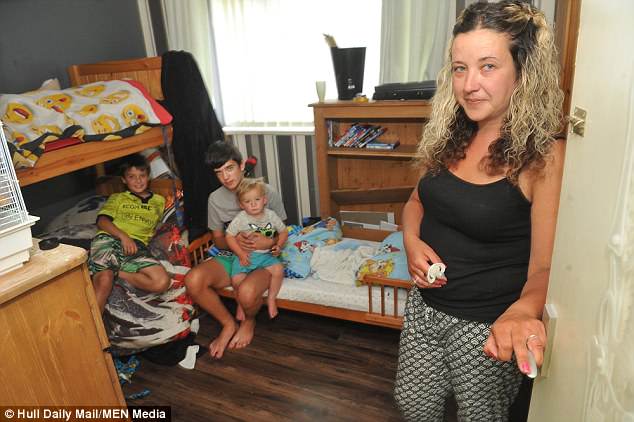 Miss Edwards, pictured with her three sons, aged one, eight and 13, have to share a room

‘She has got no window which is no good for her and it’s only a bit bigger than a cupboard with room for just a bed and a wardrobe.

‘The boys just want their own rooms and they keep asking when we are moving. It’s just stressful for all of us and I just feel like I’m not getting anywhere.’

Miss Edwards has lived in the house for 14 years and she said she has agreed a deal in principle to exchange homes with another council tenant who lives nearby.

He has a five-bedroom house and is said to have been waiting to move since the deal was struck, which she claims was done four months ago.

According to Miss Edwards, she may have to wait until the end of next month to move – and she is becoming increasingly desperate for a fresh start with her family.

‘It would be amazing to move,’ Miss Edwards said. ‘It would be the best thing ever for them all to have their own rooms and to no longer have to share one toilet. ‘It is causing arguments because we are all cooped together and no one has any space to themselves. I’m struggling to sleep because it is just playing on my mind.

‘It’s a nightmare for us, especially for my eldest son who doesn’t want to be sharing with an eight-year-old boy and a one-year-old that wakes up in the middle of the night.’

Miss Edwards says she is being made to wait for her dream move because a surveyor needs to come round and assess the house before she and her family can move out.

But Councillor John Black, the portfolio holder for housing at Hull City Council, told how this is a compulsory procedure when tenancies come to an end.

He said: ‘There are many reasons why we need to have surveyors going in and carry out checks and we do use the change in tenancy as a stop-gap to get into properties.

‘If there has been any undue waiting then I am very disappointed because clearly there is overcrowding and I hope they are able to make some progress very quickly.’