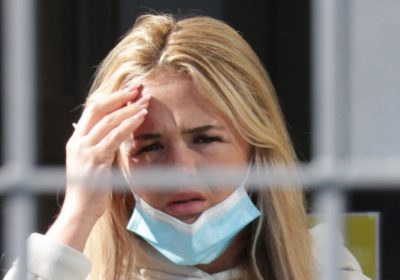 Two mums who returned from Dubai after travelling for boob jobs were arrested for allegedly refusing to quarantine.

One of their parents has claimed they are "being treated worse animals" by authorities in Dublin.

Kirstie McGrath and Niamh Mulreany – dubbed the Dubai Two – were held at Dublin Airport following their return from the United Arab Emirates.

The two women were arrested after they refused to self isolate following their planned breast and belly fat procedures abroad.

They were eventually charged and taken to hotel quarantine to self-isolate after they were briefly held in prison.

It is understood that on Monday (April 5) Kirstie McGrath tested positive for Covid forcing seven members of the gardai police to quarantine, reports the Irish Mirror.

Niamh's mum Sabrina Mulreany, a frontline worker, said: "Niamh and Kirstie are being made examples of, it’s as simple as that and the question has to be asked why?

“When those girls got on to the plane in Dubai they did not have Covid-19. The girls left Ireland on the morning of March 24 and the new rules on quarantining did not come in until March 26, two days later so why is this happening?

“These two girls are not statistics and what is happening is having an awful affect on them.

“They are being treated worse than animals – this is a complete circus.”

Mum-of-one Niamh, 25, of Scarlett Row, Dublin, and mum-of-two Kirstie, 30, from Rialto, were given the flights as birthday presents by their families and friends.

However, neither had the procedures they went out for.

When they flew home to Dublin Airport last Friday they allegedly refused to go into mandatory hotel quarantine and were arrested for breaches of the Health Act.

After appearing in court on Saturday, they were detained at Dochas women’s prison because they could not fund bonds and sureties for bail.

On Sunday their bail conditions were relaxed so they could quarantine at a hotel.

Niamh’s test results have not yet been received by her, but Kirstie's is understood to have returned a positive.

Ms Mulreany claims that the women did not break any rules and followed guidelines.

The friends are sharing a double room at the quarantine hotel where they are staying.