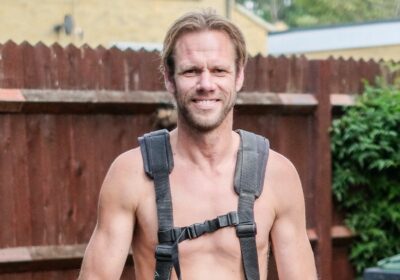 A nudist who strolled into a police station exposing his genitalia in a see-through thong and trousers now faces 12 months behind bars.

Robert Jenner, nicknamed the "Naked Carpenter", has faced previous convictions for revealing himself and had been released from prison for previous offences of indecent exposure just hours before the incident.

The birthday suit sporting crook, 48, was also subject to a seven-year criminal behaviour order (CBO) thanks to his notorious habit.

When he appeared at the police station on January 12, hoping to reclaim a phone upon his release, the first officer he met could see his genitals, but asked a colleague to verify what she had seen since she wasn't wearing glasses, a court heard.

"That was clearly a breach of the criminal behaviour order."

The court heard he was then arrested and remanded in custody, claiming the "pants have been washed a lot", suggesting they had become more see-through through wear and tear.

Asked why he hadn't worn "the kind of underwear bought in Marks and Spencer", Jenner claimed he had put on the "first thing that came to hand".

But Sandford it was "most unlikely" the former Princess of Wales Regiment infantryman had left prison wearing the see-through clothes and must have changed into them before going to the police station.

The court heard the clothing was placed on a mannequin by police for the purposes of taking photographs for evidence, with a piece of brown tape placed over the penis.

Jenner, of no fixed address, represented himself at trial and said that what he chooses to wear is a human right.

He also denied breaching the CBO by claiming his top covered his manhood.

"Had I been on show as the police suggested, I wouldn't have been asked to lift my top," he said.

"My genitals were not on show."

However a jury at Maidstone Crown Court in Kent found him guilty within just 15 minutes.

In his police interview refrained from answering whether he got "a sexual thrill" from the strange habit.

Niall Doherty, defending at the sentencing, said there was nothing "sinister, puerile or sexual" about Jenner's acts.

"He believes in naturism… In his mind his behaviour is acceptable and in accordance with his human rights,' Doherty told the court.

"He doesn't regret anything he has done but is thoroughly and utterly sick of the prison system."

Judge Charles Macdonald QC handed down the maximum sentence for Jenner's offense and said the jury had seen through the Iraq veteran's "pack of lies".

He said: "There is a long and persistent history of behaviour that is inexcusably criminal, and a continuing risk of criminal and anti-social behaviour.

"All that story of a top covering is just a pack of lies the jury saw through. This is repeat offending showing complete contempt for the court and the law."

Jenner earned his nickname in September 2016 for carrying out various handyman jobs in the buff, with only his work boots remaining.

However, furious neighbours complained about his naked antics before he was cleared of 11 charges of indecent exposure in February 2017.

Since then he has faced a number of convictions after he wore crotchless trousers while working as a Hermes delivery driver and wearing transparent shorts in a supermarket.