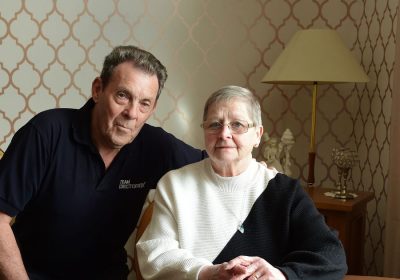 A grandmother is locked in a bitter legal battle with her grandson who vanished with more than £50,000 of her life savings.

Isabella Mill, 77, and John McCartan, 75, trusted grandson James Mill with the money after he promised to help buy them a new home together.

Mill said she and James had a "good relationship" prior to the 33-year-old’s deception, which has left the couple "sick" to their stomach.

The ordeal began when Isabella decided she wanted to sell the flat she owned and buy a property to live in with partner John.

James offered to be the go-between and deal with solicitors on their behalf and began taking cash he said would be used toward the purchase.

John then transferred Mill his £20,000 share and the couple only realised something wasn't right when they were contacted by solicitors shortly before the sale was due to close to ask when the money would be received.

The gran said she then couldn't contact her grandson by phone and ended up going to the police who advised her to get a lawyer.

Lawyers’ letters detail how police questioned Mill but he told them his bank account had been locked.

An action and degree was granted ordering James to return all of Isabella and Johnson's money, as well as £3700 for legal costs, but he still hasn't handed over the cash.

Mill is currently living in a £320,000 property and flashes designer goods on Facebook and Instagram while his gran struggles, the Daily Record reported.

In 2019 Mill emailed his grans' lawyer stating he wished to repay the couple in full from the sale of a property but payment was not received.

He then offered to pay lump sums for several months until he could release pension funds to repay the balance, but again, did not follow through on the agreement.

Mill also set up a debt repayment plan promising to repay most of the cash over six-and-a-half years but the couple say they received only three payments of just over £500 between May and August before being notified of an application to revoke the order.

She said her grandson has never given her an explanation of what happened to her money and their once-close relationship is now in tatters.

Isabella said: "Our relationship had been good. I used to take him on his holidays when he was young and looked after him just about every weekend until he was about 14.

"He would go for my prescriptions when his papa died and he had a cafe in the middle of the town we would go to. He invited us up for meals at his house. I thought the world of him. I thought he was a good businessman and doing well and I was proud of him.

The Daily Record traced him to a hotel in Dreghorn he was previously known to be running.

When he was asked why he had stopped paying his gran the money he owes, he said: "That’s due to Covid."