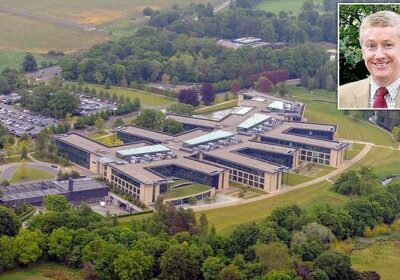 First, it was ‘Fred’s Folly’ – a sprawling headquarters that stood as a monument to monstrous executive ego.

Then it became a conference centre and, during lockdown, even housed a food bank.

Now NatWest’s gigantic office on the outskirts of Edinburgh has found another purpose.

The vanity project that symbolised the corporate hubris of the bank’s former chief executive Fred Goodwin has been handling up to 80 refugees a day as they flee the conflict in Ukraine.

The ‘welcome hub’ on the Gogarburn campus close to the city’s airport offers them immediate help and support while their applications are assessed and permanent accommodation is found.

It’s all a far cry from the freewheeling days before the financial crisis when Goodwin took a personal interest in every detail of the £350million glass and sandstone development.

It was at odds with his reputation as a ruthless jobscutter that led to his nickname ‘Fred the Shred’.

And so, perhaps not surprisingly, his lawyers took exception to an article claiming he had a special ‘scallop kitchen’ installed close to his office to serve his favourite lunch.

It was later made clear that a wide variety of luxury seafood was in fact prepared in the kitchen.

But the office was the centrepiece of Goodwin’s global banking empire built through more than 20 acquisitions.

However, the debt-fuelled buying spree caught up with him as money markets dried up and his ambitions unravelled.

The complex was officially opened with great fanfare by the Queen in 2005. But just three years later, Goodwin was forced to resign after the bank – then known as RBS and, briefly, the largest in the world – had to be bailed out by taxpayers at a cost of £45billion.

The Treasury still controls 48.5 per cent of NatWest, which changed its group name from RBS in 2020.

Goodwin, knighted in 2004 for services to banking, was unceremoniously stripped of the honour in 2012 after he was criticised for excessive risk-taking in the run-up to the 2008-09 financial crisis. 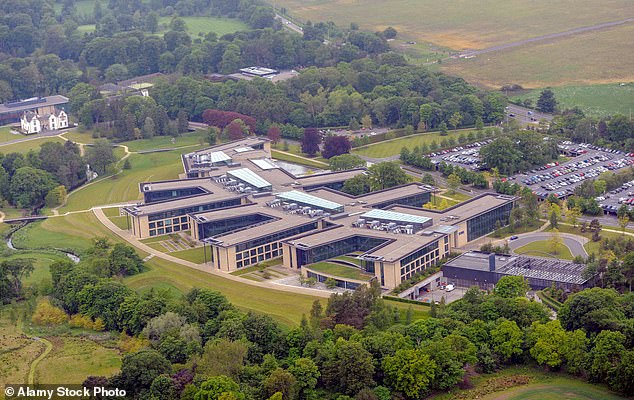 The huge 100-acre campus remains the bank’s official headquarters, with up to 6,000 staff.

But since lockdown, many have been working from home. As well as a conference centre, it contains a nursery, health club and a business school.

More than 7,000 refugees have arrived in Scotland since Russia’s invasion of Ukraine, most of them under the Scottish Government’s ‘super-sponsor’ scheme, recently paused to allow more time to deal with visa applications.