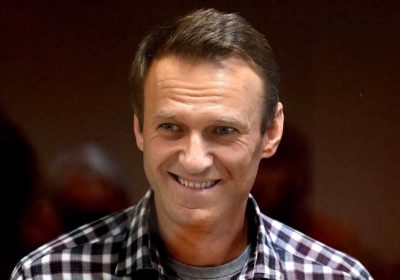 Supporters of jailed Russian dissident Alexei Navalny say President Vladimir Putin’s most prominent critic is on the 18th day of a hunger strike in a Russian prison, and could die any minute.

“People usually avoid the word ‘dies.’,” Navalny press secretary Kira Yarmysh posted on Facebook. “But now Alexei is dying. In his condition, it is a matter of days.”

Navalny’s wife, Yura, visited her husband in prison four days ago, sharing a photo on Instagram of herself outside the facility about 50 miles east of Moscow. “Post about love,” she wrote alongside the photo. “Went on a date today, the best date of my life. The coolest guy ever.”

The post said that Navalny has lost a lot of weight and had to lie down on the table he was sitting at to rest while she was speaking to him through a telephone on the other side of a glass partition. He is not allowed to see a doctor, she said, adding, “I know that he is not gong to give up.”

“But after meeting with Alexei, I worry about him even more.”

Yarmysh, who herself is under house arrest, included a link in her post to a web page trumpeting an appeal for Russians to hit the streets in support of Navalny. “Putin reacts only to mass street protests. Even the threat scares them,” Yarmysh said, suggesting the Kremlin was watching the counter on the site to see how many people signed up.

The post sparked immediate reaction. In just a few hours, nearly 450,500 people in Russia signed up to take part in a rally. When the number reaches 500,000, Yarmysh wrote, the details of the mass protest will be announced. “The main thing Putin is afraid of is street actions. But they must be really massive,” she repeated.

Navalny, Putin’s fiercest domestic opponent, went on a hunger strike on March 31 to demand medical treatment for back pain and numbness in his legs and hands. His lawyer said he is suffering from two spinal hernias.

The dissident, who survived poisoning with a nerve agent attempt widely blamed on Putin, returned to Russia in January after recovering in Germany from the attempt on his life. He was immediately arrested for violating probation from a 2014 embezzlement conviction, and sentenced to two and a half years in a penal colony in the town of Pokrov.

Dozens of prominent writers, actors, artists and academics separately signed an open appeal to Putin to provide the proper treatment to Navalny.