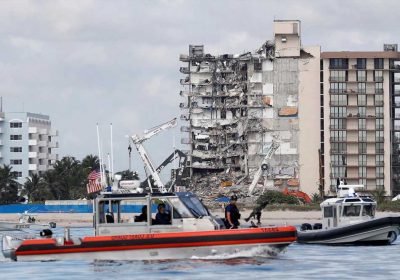 Vanderbilt U student among dead in Florida building collapse

Condo board bickering at collapsed building delayed repairs by 3 years

The family of a man missing in the Florida building collapse filed the fourth lawsuit since the deadly tragedy — and wants a judge to allow them to fly a drone over the rubble.

The children of Harold Rosenberg, who is among the 145 people missing since the collapse of Champlain Towers South in Surfside, argue that a drone above the search and rescue site would them “a set of eyes.”

“Many times, for example, if there is a criminal investigation, that documentation is not made available to the families and the victims of the collapse,” Mongeluzzi said. “There is no reason why the families shouldn’t be able to have their own access to the evidence in the case.”

The Herald said that attorneys for the family said at a press conference that a drone  “can be up there 24 hours day without any interference” over the smashed building.

Morabito Consultants conducted an engineering inspection of the building in 2018 that flagged “major structural damage” at the building, particularly with water damage at a pool deck that sat above a parking garage.

Experts believe that’s where the deadly June 24 collapse may have originated.

SD Architects were also hired for the review, which was to prepare the building for a required 40-year re-certification. The tower was built in 1981.

According to the Rosenberg lawsuit, the defendants “ignored obvious and shocking warning signs and indications that a catastrophe was imminent,” the suit said.

“Defendants knew for years leading up to this deadly collapse that the Champlain Towers South building posed an immediate and grave threat to the lives of the residents and occupants of the building, yet failed to take the necessary steps to protect the building’s occupants,” the complaint said.

Morabito recommended to the condo association that it undertake a $9 million renovation to address the issue.

But bickering on the board delayed a decision until April this year, with the price tag ballooning to $15 million by then — and most of the work yet to get going.

In an email to The Post Thursday, Morabito Consultants defended their role, saying they provided “detailed findings and recommendations” to the condo association in 2018.

“Morabito Consultants did their job, just as they have done for nearly four decades — providing expert structural engineering counsel and services,” the statement said. “And they will continue to work with the investigating authorities to understand why this structure failed so that such a catastrophic event can never happen again.”

The lawsuit was filed by Rosenberg’s children, Steve, Mark and Shoshana.