New Zealand Prime Minister Jacinda Ardern has celebrated the launch of her families' package with a message from her couch – baby Neve in arms.

Looking happy and calm, with baby Neve bundled in a blanket on her lap, Ardern said she was most proud of the Best Start tax credit for newborns, which affords families up to $60 a week for a child's early years.

"Many years ago now, one element of it at least – the Best Start payment – I started designing, on the floor of a friend's house in Hastings," she said. Ardern would have been the Opposition spokeswoman for children at the time.

"It was based on all of the research and evidence that was telling us the most important period of a child's life, is those first early years.

"And equally, at that time, that was when children in New Zealand were experiencing the most persistent poverty." 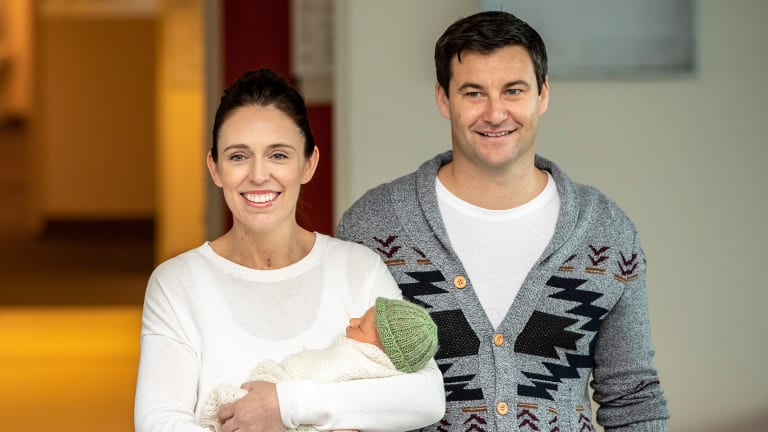 Jacinda Ardern and her partner Clarke leaving Auckland Hospital after the birth of their daughter, Neve.

Because it came into force on July 1, the Prime Minister will not be eligible herself, but any family with a baby born or due from July 1 will receive the payment.

While only the top of baby Neve's head was visible as Ms Ardern talked to her phone camera, she did share some insights into her life as a new mum.

With her new baby in her lap she revealed "this is my permanent state at the moment".

"Either breastfeeding or this," she laughed.

Ardern also promised "she wasn't too tired" and was "doing great".

The video is the second time the Prime Minister has turned to Facebook live to address the public since the birth of her daughter.

Before leaving Auckland Hospital, she filmed herself with her camera phone to "say thanks, from the bottom of our hearts" for the "kind" messages her and partner Clarke were recieving.