Home » World News » New York Dining Is Moving Indoors. How Nervous Should You Be?

New York Dining Is Moving Indoors. How Nervous Should You Be? As dining rooms reopen, doctors, engineers and other experts assess the health risks and how restaurants can reduce them. 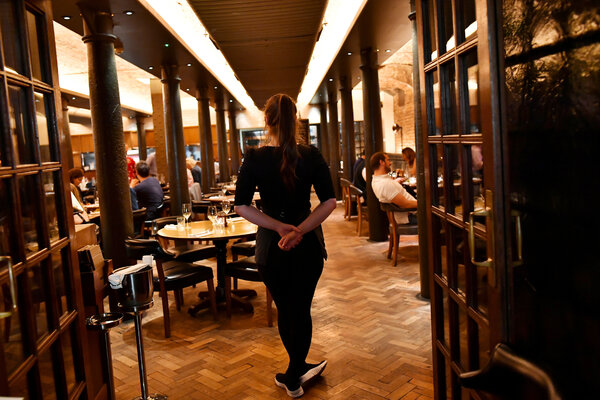 New Yorkers will be able to eat inside restaurants on Wednesday for the first time since March, and the word that best sums up my feelings about it is: Yikes!

The thought of eating inside an actual dining room does not have me cowering under the covers the way it did six months ago, when I was visited nightly by a smothering fear that the coronavirus had found me before the shutdown. What I feel now is not so much monster-under-the-bed fear as the don’t-walk-down-dark-alleys sort.

The trouble is, New York is about to walk down that alley knowing exactly what’s at the end. London has been down its own dark alley, as have Madrid and Marseille. Outbreaks came back with renewed energy in all three places, and the authorities have tightened the restrictions on dining and drinking places once more.

I’ve tried convincing myself there’s nothing to be afraid of. After all, for several weeks this spring I was nervous about breathing the air outside. Isn’t there a chance I’m overestimating the danger of indoor dining, too?

After huddling inside our caves for months with nothing but our Zoom grids and sourdough starters to keep us company, New Yorkers succeeded in bringing the city’s infection rate down. It now hovers around 1 percent, far lower than what some states were recording when they allowed their residents to plunge back into indoor dining.

That should help New York, as will some of the precautions Gov. Andrew M. Cuomo has put in place, like requiring six feet between tables, closing restaurants at midnight and limiting seating to 25 percent of capacity until at least the end of October.

Dr. Alex Jahangir, an orthopedic surgeon who serves as the chairman of Nashville’s Metropolitan Board of Health and its Metro Coronavirus Task Force, knows the perils of a botched, hasty reopening. He watched the virus stage a comeback in his city after an early attempt at returning to normal routines lifted restrictions too soon. Many of the resulting cases, he said, were traced to bars, but not to restaurants.

Stricter rules, including one that requires restaurant diners to wear masks whenever they stand up, coupled with more vigilant enforcement, brought the disease to heel in Nashville, for the moment at least. Still, Dr. Jahangir said he has walked out of several restaurants there after a quick look around. “One place, I felt really uncomfortable,” he said. “There was no air flow, servers put their masks down when they were sitting around. Good lord.” 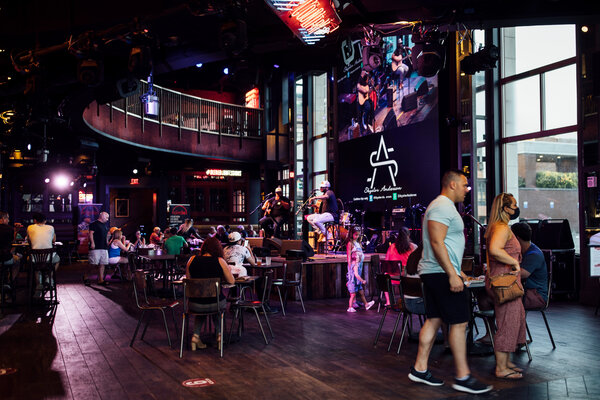 But several met his standards, and he sat down to eat. Dr. Jahangir said that he would eat indoors in New York City, too, once he’d assured himself that the management had taken “appropriate steps.”

My conversation with Douglas Mass was reassuring, too. Mr. Mass, a mechanical engineer and the president of the engineering firm Cosentini Associates, A Tetra Tech Company, has designed airflow systems that were regarded in the field as technical marvels. Yet as an advising member of a restaurant-safety panel convened by the Food & Society Program of the Aspen Institute, he has been advocating some extremely low-tech solutions to lower the risk of indoor dining.

Placing movable partitions between tables, which New York State requires when tables cannot be spaced six feet apart, can help block some of the airborne particles sent flying by a sneezer or loud talker, Mr. Mass said. Opening a window or door will let in fresh air. Yes, in an ideal world a restaurant’s ventilation system would already do that, but the hospitality business is not an ideal world.

If uncontaminated air can’t be brought in from outside, it can be “mimicked,” Mr. Mass said, by filtering the contaminants out of indoor air. Mr. Mass advises restaurants to have their ventilation systems, many of which have been idle for half the year, thoroughly cleaned and then fitted with high-efficiency filters, such as MERV-13 or better. If those systems are too old or weak, he recommends buying free-standing air purifiers using HEPA filters, which can catch airborne particles carrying coronavirus. Some simple models sell for less than $200.

Mr. Mass, who lives in Manhattan, said a restaurant that follows best practices for safety and has good ventilation and widely spaced tables — separated, perhaps, by partitions — is one where he would consider eating in the coming weeks.

“I’m going to be the first one running out to restaurants when they open,” he said. “I’m comfortable. A lot of the restaurants are taking this very seriously.”

Just as Mr. Mass helped me think about indoor air, the architect David Rockwell changed my thinking about indoor space and how it’s used. All summer, the first encounter between diner and server — the one where you ask if they have a table and they say, just a minute, I’ll check — usually took place outside, on the sidewalk. What if it stays there in the fall and winter?

This simple idea kind of blew my mind. The host station is almost always the most crowded spot in any restaurant. Checking in will take even longer now that New York State requires hosts in the city to take contact information and temperatures. Move that conga line outside, and you’ve cut down on crowding and on the time customers spend indoors. And you’ve allowed at least one employee, the host, to work in the fresh air.

Building specifications for the modular, weather-protected outdoor host stands being produced by his firm, Rockwell Group, at cost for Melba’s, in Harlem, will be available online for any other restaurant to use. They could become as familiar as patio umbrellas now that Mayor Bill de Blasio has allowed outdoor service to continue year-round.

Other ways to make indoor dining faster include contactless ordering, payment and other transactions. Changes like that will also cut down on potential virus exposure for servers, who take the greatest risks because they come in contact with so many people in the course of a shift.

“The idea of checking in a lot — we really try not to do that,” said Sean Feeney, who owns two restaurants in Brooklyn with the chef Missy Robbins. One of them, Lilia, was open for outdoor dining this summer. Its service handbook was rewritten to cut down on the personal contact that used to be at the heart of careful service.

“And when we do approach the table, we try to be as efficient as possible,” Mr. Feeney said. “Service and hospitality as we knew them have changed drastically, and that will continue when we come inside.”

Cleaner air, faster meals, smarter rules that avoid other cities’ mistakes — when I talked to the optimists, I am just about ready to book an indoor table for four and invite Mr. Mass, Mr. Rockwell and Dr. Jahangir to join me.

But when I talked to scientists, my fears came back.

Eating in restaurants is, to begin with, one of the greatest risk factors associated with Covid-19.

In a study published this month by the Centers for Disease Control and Prevention, adults who had tested positive for the virus were asked where they had been and what they had done in the two weeks before coming down with symptoms. They were twice as likely to say they had eaten at a restaurant as people with negative test results. No other activity the researchers asked about was linked to as many cases.

The restrictions Governor Cuomo has placed on indoor dining are stricter than those in many other places. At the bars inside New York City restaurants, there will be no sitting and no standing, let alone dancing and yelling woo-hoo. Still, I’d feel more confident about indoor dining if he had been even more cautious.

New York permits diners to drop their cloth face coverings the whole time they’re seated. Why can’t the state follow the lead of New Jersey, where customers are supposed to wear masks except when they’re actually eating or drinking? In particular, they could also be asked to wear masks any time a server comes to the table. New York encourages this, but doesn’t require it.

Even people who are conscientious about their masks, though, have to take them off to eat and drink. And while their masks are down they do something else: They talk. The larger droplets that leave our mouths when we talk may be a risk mainly to people at our own table, said Linsey Marr, a professor of civil and environmental engineering at Virginia Tech, but the tiny aerosols that float on air currents can pose a risk to anyone in the room.

Even those on the far side of a partition? “I think that’s mostly theater,” Dr. Marr said. “Imagine the aerosols as cigarette smoke. Will that partition stop smoke?”

Dr. Marr, by the way, would like to see restaurants leave more than six feet between indoor tables. Her preference would be 10 feet between all customers, except those who are sitting together.

This is Lindsey J. Leininger’s view, too. Dr. Leininger, a clinical professor at the Tuck School of Business at Dartmouth College and one of the leaders of Dear Pandemic, a public-health campaign, worries not only about servers, whose risk goes up each time a new diner walks in, but also dishwashers and cooks, many of whom will be breathing the same indoor air as customers for the first time since the spring.

Because of high real estate prices in Manhattan, many restaurant workers “have to commute out to very remote places and live in crowded multigenerational households,” Dr. Leininger said. “If one of them gets exposed in a restaurant, they could bring that exposure back to their grandmother with diabetes.” Similar conditions helped ignite the outbreak that tore through Bergamo, Italy.

While she approves of many of New York’s regulations, Dr. Leininger thinks it is next to impossible to make restaurants risk-free. “I cannot tell you that indoor dining is safe,” she said. “Period. Full stop.”

This came after Dr. Leininger told me how much she loves restaurants, how she has a restaurant memory to go along with almost every important event in her adult life and how painful it was to say anything against restaurants.

“I cannot believe I get to talk to the restaurant critic for The New York Times and I have to say that indoor dining is bad,” she said at the end of our conversation.

I feel your pain, Dr. Leininger. There are a lot of things I can’t believe, either.

I can’t believe we’re going to risk another outbreak in New York so restaurants can have dining rooms that are three-quarters empty. I can’t believe restaurants and the people who work in them have been failed so badly by Washington that many will have no choice but to go along with it. I can’t believe clear, straightforward safety advice is still so hard to come by at the government level that I had to spend most of a week on the phone with experts, asking whether readers should actually eat inside the places I’m writing about.

In a well-ordered society, readers wouldn’t need to get that information from a restaurant critic.