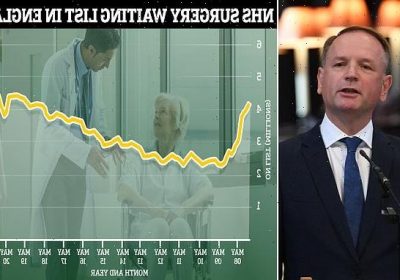 England’s backlog of patients waiting for routine treatment will take at least three years to clear, according to the departing boss of the NHS.

Sir Simon Stevens warned 13million people will be left needing care ‘if no action was taken’ — more than a quarter of all adults in England.

An all-time high of 5.3million people are already waiting for operations such as knee and hip replacements, with coronavirus having caused massive disruption across the health service.

Newly-appointed Health Secretary Sajid Javid this week revealed he was ‘shocked’ at projections the waiting list could more than double in size by the end of the year.

Sir Simon, who will stand down from his chief executive role later this month, said it is unlikely to hit such high levels because the NHS won’t sit on its hands in tackling the backlog.

But speaking to a Royal Society of Medicine webinar, he claimed ‘effective action’ was needed to fix the problem. 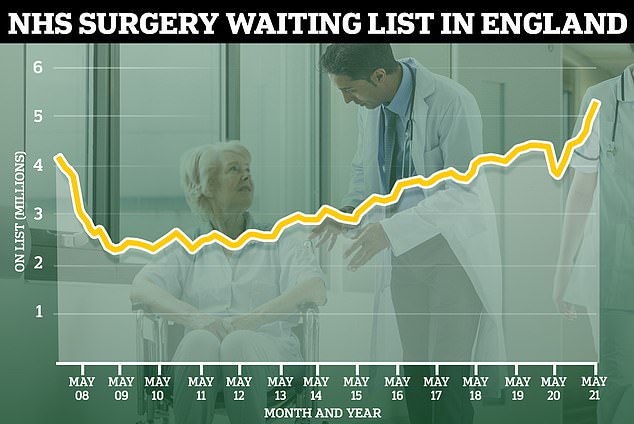 NHS England figures show more than 5.3million people are waiting for treatment in England, the highest number since records began in 2007. Ministers fear the list could surge to 13million

More than 1,200 leading scientists are rebelling against No10’s decision to push ahead with ‘Freedom Day’ on Monday, slamming the move as ‘criminal’ and branding the Government’s return to pursuing herd immunity ‘unethical’.

A coalition of experts and doctors signed a letter in the medical journal The Lancet critiquing Boris Johnson’s ‘unscientific’ decision last night, amid soaring Covid infection numbers and rising hospitalisations and deaths.

The group — including four prominent SAGE experts — claimed millions more adults need to be double-vaccinated and doses should start being given out to children as well for easing restrictions to be safe.

It came as Britain recorded 50 Covid deaths for the first time since April, while cases showed no sign of slowing down, jumping by a quarter in a week to another six-month high with 36,660 positive tests.

The Prime minister confirmed that all restrictions would be dropped next week. However No10 has dropped all mention of the final stage of its roadmap being ‘irreversible’, with one minister today hinting that the drastic action could be adopted once again this winter.

He added: ‘Clearly, that is not what ought to happen over the next three years or 30 months or so.

‘It is possible to put in place the extra resources, the operating capacity, new ways of doing fast diagnostics, that will mean that doesn’t come to pass.

‘But that is… what, absent any effective action, could come about.’

Hospitals face ‘three big uncertainties’ as they try to squash the waiting list, he said.

Sir Simon, who will be joining the House of Lords, said: ‘The first is how many coronavirus patients will they be looking after over the next 12, 24, 36 months.

‘Secondly, will there be the opportunity to adjust some of those constraints on the infection control requirements which obviously it’s vital are in place while they’re needed.

‘And thirdly what will be the extent of patients coming forward for care when they didn’t do so over the last 15 or 18 months?’

As it stood at the end of May, 5.3million people in England were waiting for treatment.

The waiting list has continued to grow throughout the pandemic and the latest figure is the highest since records began in 2007.

But health chiefs have already said they are starting to make a dent in the backlog, with people waiting longer than 18 weeks for routine ops — like hip replacements and cataract surgery — dropping by more than 80,000 in May.

Hospitals also picked up treatment for those who had been waiting more than one year for treatment.

Figures show 22 of 106 clinical commissioning groups — NHS bodies that manage care in local areas — were recording waiting lists that had spiralled to a tenth of their population.

More than one in seven people were waiting for care in Birmingham and Solihull, which was the worst-hit part of the nation according to data from the House of Commons Library.

Mr Javid is planning to merge all CCGs into integrated care systems, which will have bigger budgets and oversee healthcare in much larger areas.

But Mr Ashworth accused the Government of ’embarking on a top down reorganisation of the NHS’ at the wrong time. 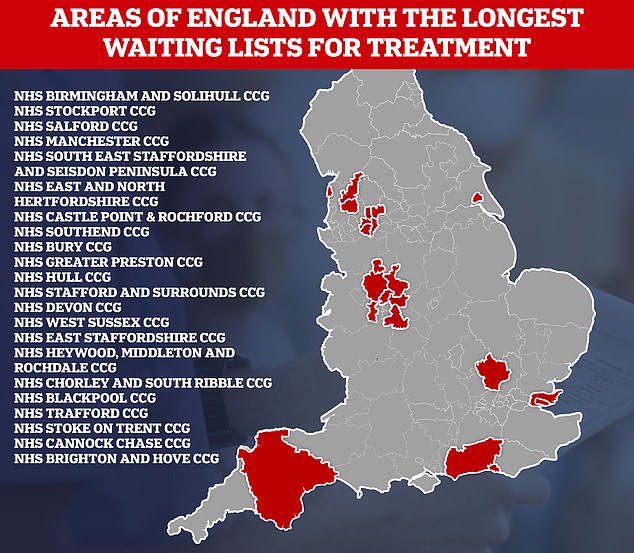 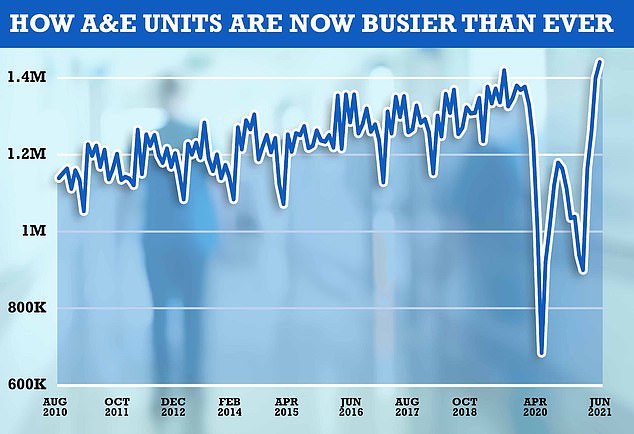 Official data also revealed A&E units saw their busiest ever month in June, with more than 1.4million attendances in June 2020