Northern Ireland’s pubs could reopen on Friday by default as talks to extend its circuit breaker lockdown collapsed into acrimony last night.

Ministers at Stormont failed to agree a fresh round of regulations after the second day of talks on an extension ended last night without an agreement to continue it into the winter.

The current four-week circuit break lockdown ends at midnight on Thursday night, at which point regulations that have forced the closure of much of the hospitality sector will fall away.

Sinn Fein and others want the lockdown extended by two weeks, while the DUP wants it tweaked to allow some businesses to reopen.

Ministers in the country are facing increasing fury from businesses who have been left in limbo, not knowing if they can reopen or not, with talks expected to resume later today on proposals that would see a partial reopening of the hospitality sector.

There were angry exchanges at the outset of last night’s meeting when the DUP moved to block a proposal from health minister Robin Swann to extend the circuit break measures for two more weeks.

The unionist party used a contentious Stormont mechanism – a cross-community vote – to effectively veto the proposal, despite support for the move by a majority of executive parties.

Mr Swann and senior health officials had warned that Covid-19 cases were likely to spike again in mid-December if the fortnight extension was not approved.

Sinn Fein Deputy First Minister Michelle O’Neil said: ‘It’s important that we follow the medical advice and get this right.’ 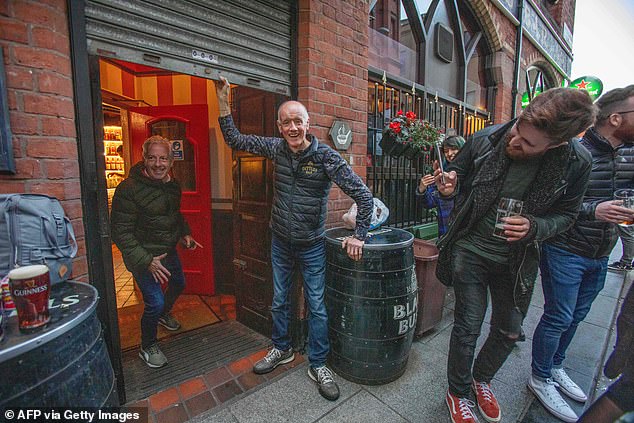 The current four-week circuit break lockdown ends at midnight on Thursday night, at which point regulations that have forced the closure of much of the hospitality sector will fall away 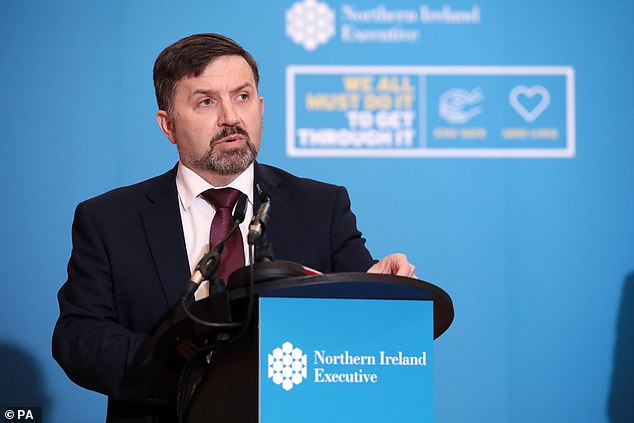 An anticipated vote on those proposals did not proceed and the meeting concluded after midnight without agreement on a way forward.

Earlier, Alliance Party justice minister Naomi Long had been particularly critical of the deployment of the cross community vote – a mechanism designed to protect minority rights in a post-conflict society – to torpedo health regulations.

However, the vote also created anger within the DUP, with the party understood to be furious at Sinn Fein’s decision to back Mr Swann’s proposal.

A senior party source accused Sinn Fein of ‘somersaulting’ on an apparent pledge to endorse the reopening of cafes and restaurants.

The source claimed Sinn Fein agreed that position at the weekend, pointing to a Sunday media interview in which Ms O’Neill said the executive was looking at ways of ‘opening things up perhaps without alcohol’.

The source further claimed Sinn Fein changed position on the instruction of its Dublin powerbase.

The claims were robustly rejected by Sinn Fein, with the party insisting it was acting in line with medical and scientific advice.

A senior Sinn Fein source said: ‘We always said any movement had to be based on medical advice’.

After Mr Swann’s paper was voted down, ministers turned to debating the alternative proposals tabled by Mrs Dodds.

It’s understands those measures include:

A further 11 Covid-19 linked deaths were announced in Northern Ireland on Tuesday, along with 514 new confirmed cases.

With it clear a consensus on the proposals would not be reached, ministers did not vote on the measures on Tuesday night, instead choosing to end the meeting shortly after 12.30am.

They are due to return to discussions on Mrs Dodds’ proposals later on Wednesday.