Victorian Catholic school teachers are threatening to work to rule next term in a union-led protest over excessive workload, including limiting their working day to school hours, refusing to take extra classes or volunteer for information nights, concerts, fetes and Mass.

The union wrote to Catholic school teachers on Thursday, urging them to take a “no more freebies” approach to their roles in term four as negotiations over a new workplace deal stall. 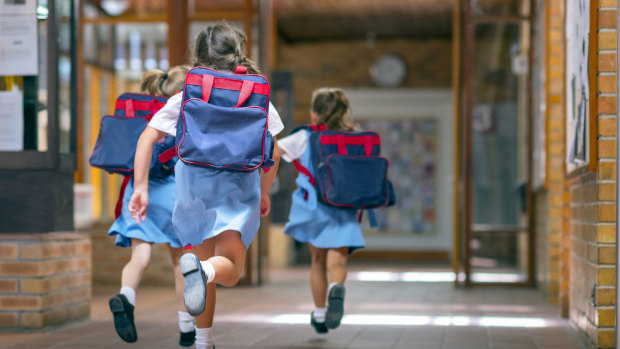 Catholic teachers are planning to work to rule due to stalled enterprise bargaining agreements.Credit:iStock

The Independent Education Union has called on Victorian Catholic educators, except for those in the Diocese of Sale, to refuse to perform any work outside of their legal requirements from the beginning of term four. This means teachers won’t take on extra classes, respond to communications or attend non-critical activities outside work hours or allow class size limits to blow out.

The union has also asked teachers not to do overtime, run errands during breaks or do work beyond their description or pay grade.

Catholic school staff have been pushing for almost 16 months for a new four-year agreement. The agreement would include a 2 per cent annual pay rise, a 90-minute-a-week cut to classroom teaching time and time-in-lieu increases for extra duties such as camps. It would put them on par with state school teachers.

The Catholic Diocese of Sale, which governs 45 schools on Melbourne’s eastern urban fringe through to East Gippsland, recently struck its own four-year deal with the Independent Education Union.

Governing bodies for the rest of the state, which includes Melbourne Archdiocese, Ballarat and Sandhurst diocese, Catholic Religious Institute and Ministerial Public Juridic Person Victorian Schools, have made commitments about workload reduction, but negotiations have stalled over a range of conditions including secondary teachers having to take extra classes, time-in-lieu access and consultation and dispute resolution.

The action is made riskier as multi-employer bargaining laws prohibit union members in the Catholic education sector from taking industrial action. This means employers could construe this as unprotected industrial action, seek an injunction and employees could be threatened with fines or penalties against the union.

Federal Minister for Employment and Workplace Relations Tony Burke has made an election promise to reform the system.

A primary school teacher, who asked not to be identified, said things were “getting out of control”.

“At the moment, honestly, teachers are exhausted and at the current time, we are increasingly angry at how little respect and understanding that [Melbourne Archdiocese Catholic Schools] are showing towards us and our work,” she said.

A secondary school teacher said they were getting increasingly frustrated.

“Nobody wants to get there [to strike], it would be such a disappointment to get there. This can be negotiated, it can be worked through.”

Debra James, general secretary Independent Education Union Victoria Tasmania, said it “beggars belief” that Catholic governing bodies were still holding out when the Diocese of Sale and state government had already made offers.

“We are left with no option but to show them what schools look like when staff finally say ‘no’ to the constant requests to do more and more,” James said.

She hoped the Catholic education bodies would come back to the table with an offer, rather than argue that it is unprotected industrial action.

Catholic Education Commission Victoria executive director Jim Miles said they “deeply value” the dedication of their staff and contribution during the pandemic and that Catholic education authorities were committed to negotiating in good faith.

“We want to formalise agreed outcomes regarding pay and other working conditions as soon as possible,” Miles said.

“We aim to allocate resources in ways that deliver the best outcomes for students and families while fairly and responsibly rewarding our staff.”