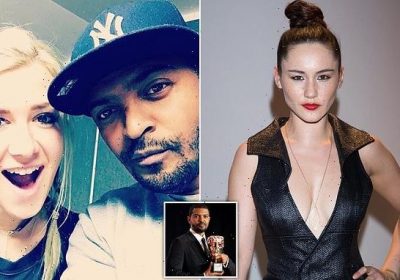 Noel Clarke is facing the prospect of a police investigation after seven more women came forward to accuse the Bafta star of a campaign of sexual harassment and bullying.

With 27 women now saying they were sexually harassed or groped by the celebrated actor and director, Scotland Yard has said it is ‘assessing’ a specific allegation.

The Met Police confirmed that a ‘third-party report’ was made on April 21 ‘relating to allegations of sexual offences committed by a male over a period of time’.

A spokesman said no criminal investigation had been launched but that officers are ‘currently assessing the information’. 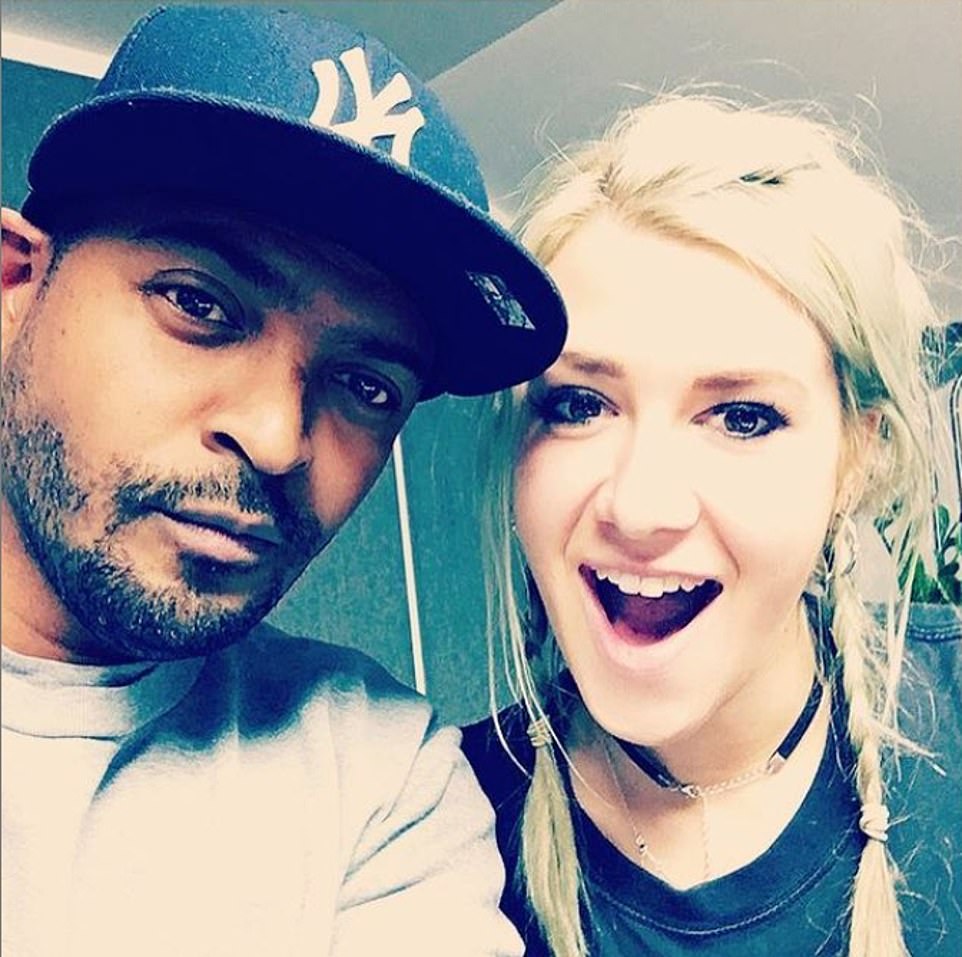 ACCUSATIONS: Jahannah James, pictured right, with Noel Clarke, has spoken out against the actor

They added: ‘We would urge anyone who believes they have been subjected to a sexual offence to report this to police so the information can be assessed and investigated accordingly.’

Clarke, a married father of three, has vehemently denied claims by women who accuse him of sexual harassment, groping and bullying between 2004 and 2019.

They claim he told them to strip off for auditions and forced them into filming nude scenes with him, as well as making unwanted advances and lewd remarks.

Jake Taylor, the school’s principal, said Clarke joined the board in 2011 in an advisory role and would hold question-and-answer sessions for students. He added: ‘It came to our attention that on one occasion he took it upon himself to turn one of these Q&A sessions into a practical acting workshop.

‘We were informed that in this unsanctioned class he set up improvisation exercises in which students were told they had to get undressed and get ready for bed.

‘Our response was to no longer schedule Noel to take unsupervised sessions with immediate effect.’ 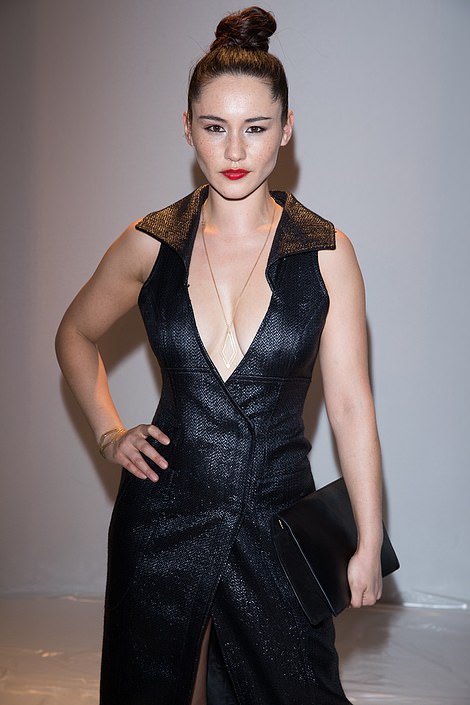 Christina Chong (pictured), who appeared opposite Clarke in the first series of police drama Bulletproof, posted on Twitter: ‘If in doubt, trust me, it’s true… He’s a sexual predator’

In a statement, Mr Taylor said that fresh details in recent days about the session and another previously unknown workshop by Clarke ‘has shocked us’.

‘Had we known about these details at the time we would have ended the professional relationship between Noel and our school with immediate effect,’ he added.

Clarke’s lawyers have denied that the London School of Dramatic Arts asked him to stop giving classes – saying that Clarke’s workshop, called Facing\Your Fears was aimed at helping students with anxieties over performing as actors.

Meanwhile, one of Clarke’s co-stars has described the allegations against him as the ‘UK film industry’s best kept secret for years’. Christina Chong, who appeared opposite Clarke in the first series of police drama Bulletproof, posted on Twitter: ‘If in doubt, trust me, it’s true… He’s a sexual predator.’

Actress Jahannah James, who appeared in the film Brotherhood, which was directed by and starred Clarke, says she was forced to audition nude for him in 2013, and claims she later discovered he had covertly filmed it.

The allegations have surfaced after Clarke received an ‘outstanding contribution’ award from Bafta last month in recognition of his glittering career writing, directing and starring in critically acclaimed films such as Kidulthood, Adulthood and Brotherhood. He also starred as Mickey Smith in Doctor Who between 2005 and 2010.

The Guardian newspaper reported that three senior industry figures had tipped off Bafta about the claims almost two weeks before the ceremony.

In a statement, Bafta claimed it had acted ‘as quickly and supportively as we could, even though we had only received the most generic of claims and no actual first-hand information to investigate allegations which were potentially of a criminal nature’.

However, some suggested it had become a witch-hunt, which undermined the principle of innocent until proven guilty. One leading British actress told this newspaper: ‘It is an hysterical, prurient, over-reaction – all-too typical of the witch-burning climate we live in since the mobs on social media began to dictate the rule of law.’

She added: ‘The rule of law applies. Clarke denies all charges and has not yet been proved guilty.

‘When you “no platform” an entire production because of an alleged crime, you are punishing hundreds of innocent creatives for the as-yet- unproven misdemeanours of one member. Writer, actors, crews and the public lose their rights.’

Clarke has said he’s ‘deeply sorry’ for some of his actions.

He added: ‘I vehemently deny any sexual misconduct or criminal wrongdoing. Recent reports, however, have made it clear to me that some of my actions have affected people in ways I did not intend or realise. To those individuals, I am deeply sorry. I will be seeking professional help to educate myself and change for the better.’

By Chris Hastings for the Mail on Sunday

One of Noel Clarke’s co-stars has referred on social media to the emergence of allegations against him, saying: ‘About f****** time.’

Mandeep Dhillon, one of the main cast members in the first series of his police drama Bulletproof, was among several colleagues to comment on the revelations.

His Viewpoint co-star Alexandra Roach tweeted that she ‘sees, hears and believes’ the alleged victims, adding: ‘Thank you to the women for your incredible bravery in coming forward.’

Earlier, Bulletproof star and co-writer Ashley Walters said he was ‘deeply saddened’ by the claims against Clarke, but could not ignore them. 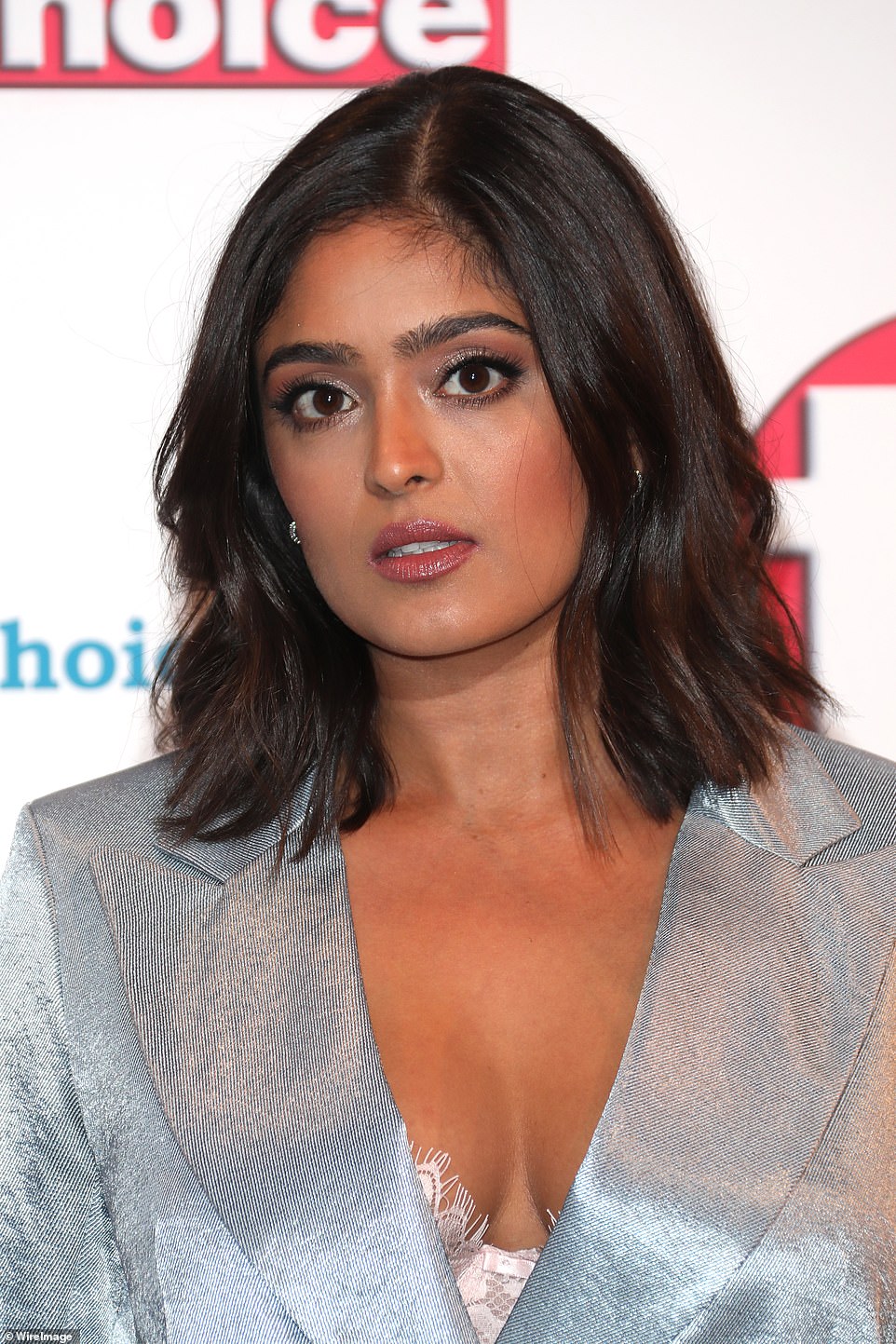 Mandeep Dhillon (pictured), one of the main cast members in the first series of his police drama Bulletproof, was among several colleagues to comment on the revelations

He wrote on social media: ‘My thoughts are with the women who have come forward and told their awful stories.

‘I could never condone behaviour of this nature neither in nor out of the workplace, and whilst Noel has been a friend and colleague for several years, I cannot stand by and ignore these allegations. Sexual harassment, abuse and bullying have no place in our industry.

‘Every woman has the right to a safe workplace and moving forward I pledge my dedication to this.’

Jaime Winstone, who featured in Clarke’s breakthrough film Kidulthood, which came out in 2006, went on to Instagram to share the logo for Time’s Up, the movement founded amid the Harvey Weinstein scandal, which supports victims of sexual harassment.

BBC is latest broadcaster to cut ties with the actor

By Chris Hastings for the Mail on Sunday

Embattled Noel Clarke stood increasingly alone last night as the entertainment industry turned its back on him.

The BBC became the latest broadcaster to distance itself from the controversial star, with a spokesman saying: ‘We will not be progressing any projects with Noel Clarke at this time.’

Bosses at ITV had already pulled the final instalment of police drama Viewpoint from its Friday night schedule because of Clarke’s starring role, although it is available online at ITV Hub until tonight when it will be removed. Viewing figures for the episode were unavailable. 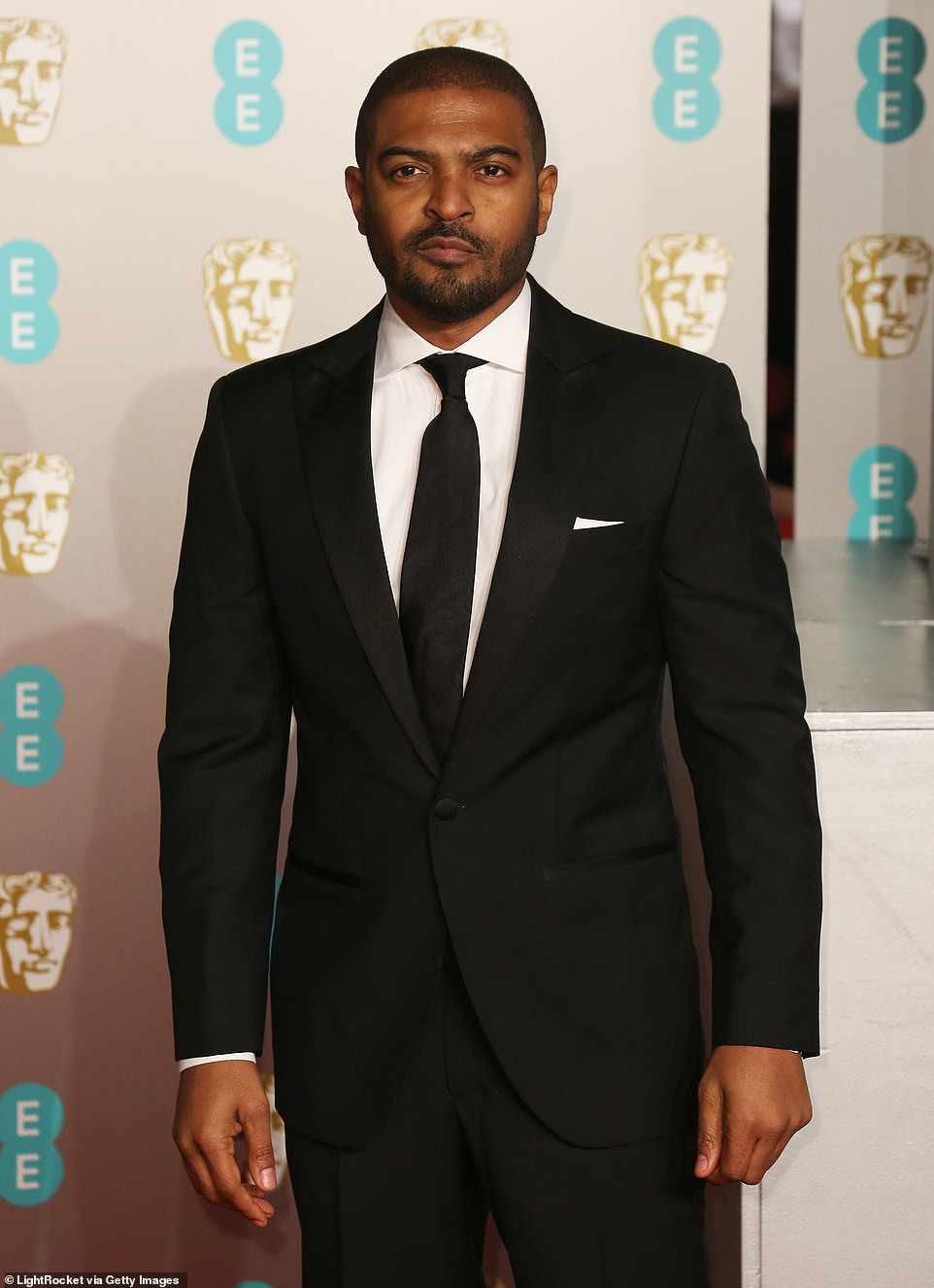 Last night, the British Film Institute – which was involved in the funding of some of Clarke’s projects – said it was ‘extremely concerned about the recent allegations’ and ‘deeply sorry for anyone affected by such behaviour’.

The statement added: ‘Everyone has the right to feel safe at work, and allegations of sexual misconduct, bullying or harassment must be taken extremely seriously. This alleged behaviour should not be tolerated. Our workforce must be enabled to report incidents and feel confident that guidance and policies are being put into practice.’

‘We recognise it can be extremely difficult . . . to come forward and the pressure and burden that brings on individuals, so this is why it is so important for employers to take the lead and invest in preventative measures and effective support.’

By Michael Powell and Chris Hastings for the Mail on Sunday

The chairman of Bafta feared that giving an award to Noel Clarke could ‘destroy’ the organisation, it emerged yesterday.

Senior figures had been tipped off about Clarke’s alleged behaviour, but decided to go ahead with the April 10 ceremony in the absence of direct evidence from victims.

According to the Guardian, the letter said they were ‘extremely concerned’ about its intention to give Clarke the award given the first-hand accounts they had heard.

While Bafta chairman Krishnendu Majumdar acknowledged that the issues raised were ‘extremely serious’, he said it was a ‘difficult situation’ to deal with without detailed evidence – adding: ‘We cannot act as judge and jury on this.’ 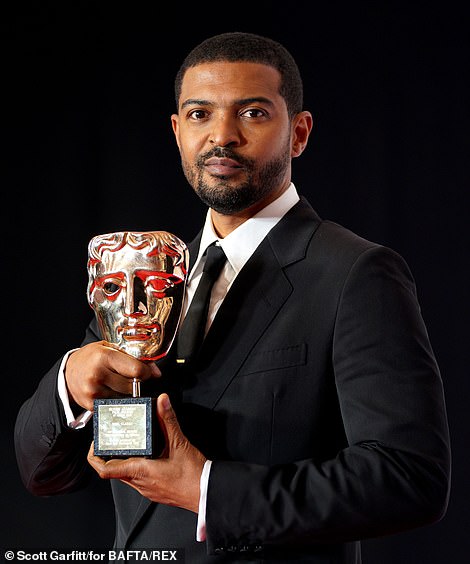 The chairman of Bafta feared that giving an award to Noel Clarke could ‘destroy’ the organisation, it emerged yesterday

Bafta’s lawyers advised the board that the scant information it had received so far did not warrant suspending the award. They also reportedly questioned whether the organisation, which is a charity, had a legal duty to investigate such matters.

By the evening of April 9, less than 24 hours before Clarke was due to he honoured, Bafta’s leaders were in turmoil.

He said he had heard there could be as many as 12 women making allegations against Clarke, but he needed to hear it for himself before pulling the award.

‘We could be ruining an innocent man’s career,’ he warned.

Mr Majumdar called Mr Krishna Floyd at 10pm the same evening and said: ‘People will say, “Bafta knew [about the allegations], and didn’t do anything about it.”

‘We’ve been trying to do something about it. In the court of public opinion we are going to be . . . this will destroy us.’

Last night, a senior Bafta member told The Mail on Sunday how the academy spent two weeks wrestling with how to respond to the allegations.

‘If you don’t go ahead and it’s all planned, you are assuming the person is guilty,’ they said.

‘I don’t know what you do in those circumstances. It’s a very difficult thing.’

Bafta did not suspend Clarke’s award until last Thursday at 8pm, after The Guardian revealed 20 women had accused him of sexual harassment, groping, misconduct and bullying.

The actor categorically denied virtually all the allegations.

In a statement, Bafta claimed it had acted ‘as quickly and supportively as we could’, adding: ‘No first-hand allegations were sent to us.

‘No names, times, dates, productions or other details were ever provided. Had the victims gone on record as they have with The Guardian, the award would have been suspended immediately.’

A spokeswoman said the organisation was ‘reviewing’ procedures, but added it was too soon to say what that might look like.