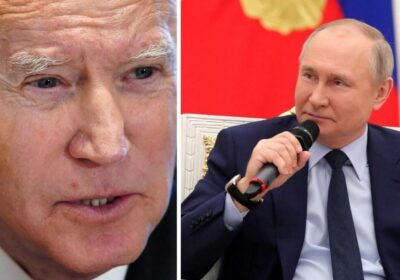 Responding to whether or not Mr Biden was the “right man to be leader of the free world” at such a time of crisis, columnist Lionel Shriver said “of course not”, before adding that his tenure has been “a catastrophe”. Ms Shriver accused the President of “empty threatening rhetoric” when dealing with the possibility of Putin using nuclear or chemical weapons in Ukraine.

Speaking on LBC, Ms Shriver said: “Of course not. It’s a catastrophe. I mean in some ways Biden has done better than I would have expected.

“He’s done a pretty competent job of rallying the troops and getting Europeans to speak with one voice.

“I do get a little tired of what I would call his empty threatening rhetoric, though. He’s always sabre-rattling with a pocket knife.

“When he talks, for example, about what he would do if Putin used chemical or nuclear weapons [in Ukraine], it’s always: ‘Well, you’d, you’d, you’d be sorry’.

“That has a ring of impotence about it. The bottom line is the guy is not very scary. He’s ridiculed by his own people as dottering, impotent and senile.”

President Biden has made repeated assertions that Russian forces are guilty of “war crimes” and “genocide” in Ukraine.

Speaking after the Bucha massacres, Biden accused Putin of “trying to wipe out the idea of even being Ukrainian”.

He added: “More evidence is coming out of the horrible things that the Russians have done in Ukraine. And we’re going to only learn more and more about the devastation.

“We’ll let the lawyers decide internationally whether or not it qualifies, but it sure seems that way to me.”

But Ms Shriver accused Biden of failing to declare his intentions should Russian forces violate rules of conflict.

When asked at the end of March whether NATO would respond to Russian use of chemical weapons, he told reporters in Brussels that they would retaliate “in kind”.

He said: “It would trigger a response in kind, whether or not, you’re asking whether Nato would cross, we’d make that decision at the time.”

Ms Shriver pointed to comments such as these to suggest that when the time comes for strong assertions, Biden defers.

National security adviser Jake Sullivan added that Russia would pay a “severe price” for use of chemical weapons but declined to say what those repercussions could be.

He said: “Any use of weapons of mass destruction, nuclear, chemical, biological, Russia would pay a severe price for the use of those weapons, as the president has previously said.

“We have spoken to our allies, we’ve done contingency planning within our own government, and we have communicated directly to the Russians.”

But a senior administration official has since claimed that US reaction to such Russian forces would amount only to further economic sanctions, according to ABC News.