Obsessed stalker, 27, is jailed for more than two years after bombarding model with death threats and thousands of calls

A stalker obsessed with a model has been jailed for more than two years after bombarding her with death threats and thousands of calls.

Nathan Blair caused former friend Amy Potter to lose work by falsely claiming she moonlit as a prostitute, sent her mother nude photos he said were of her daughter and made false allegations to social services about her child.

Newcastle Crown Court was told the model has been left living in fear of what he is capable of as he continued offending even after being put on bail by the police and then a judge.

When she confronted him, he threatened her by saying: ‘Are you ready for what’s about to happen to you. You will be gone by Christmas.’

The terrifying campaign of stalking also involved the 27-year-old bizarrely ordering 20 takeaway meals to Miss Potter’s home in one night.

Gavin Doig, prosecuting, said: ‘This case concerns the defendant’s obsession with the complainant, who has never been in a relationship with him but was known to her before this.

‘She is a model and first met him on Facebook and then in person and she became convinced he was obsessed by her after he began interfering with her relationship with her boyfriend by making up lies about him.’ 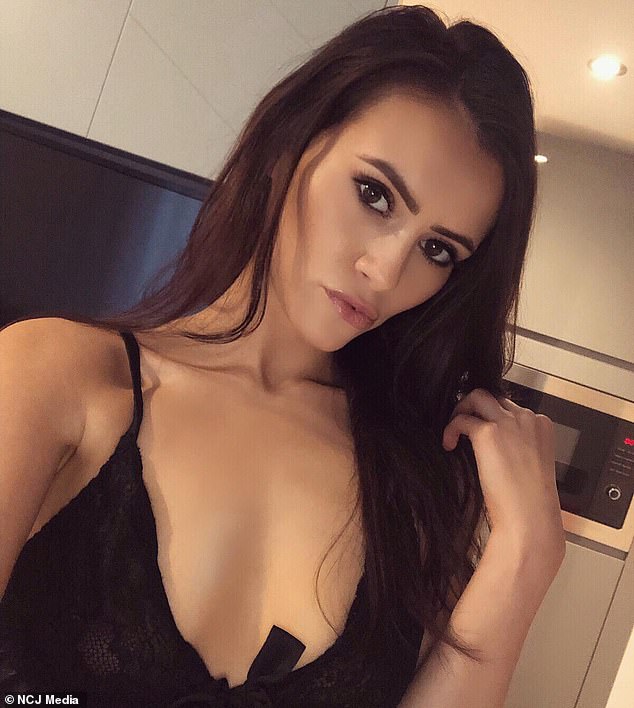 Model Amy Potter, pictured, was bombarded with death threats and thousands of calls by her stalker

Miss Potter told Blair, of Camsey Close, Longbenton, North Tyneside, she wanted no more to do with him but he refused to accept that and he bombarded her with thousands of calls from private numbers.

In August last year he made contact with the victim’s mother, sending her a message pretending to be from a modelling agency, asking for her daughter’s contact details.

The woman realised it was him and refused to provide the information.

Mr Doig said: ‘In response he sent her naked images, suggesting they were of her daughter with a message which included the words ‘you must be proud’.

‘She felt alarmed and distressed.’

The court heard Blair started messaging Miss Potter on Instagram from September last year, pretending to be from a modelling agency.

When she realised what was going on, he said: ‘Are you ready for what’s about to happen to you. You will be gone by Christmas.’

She changed her phone number but he found out her new details and made a thousand phone calls, which were either silent or playing music.

On September 14, 20 takeaway meals were delivered to Miss Potter’s home, with Blair using her email and phone number.

Someone also her put her on the Craigslist website, advertising her as a prostitute. Blair denied doing this but she was contacted by several men as a result of the advert.

Miss Potter also got regular abusive and threatening messages from fake accounts, with posts on her modelling Instagram account which were visible publicly.

The victim, from Newcastle, reported him to the police and he was interviewed as a voluntary attender and his phone was seized. 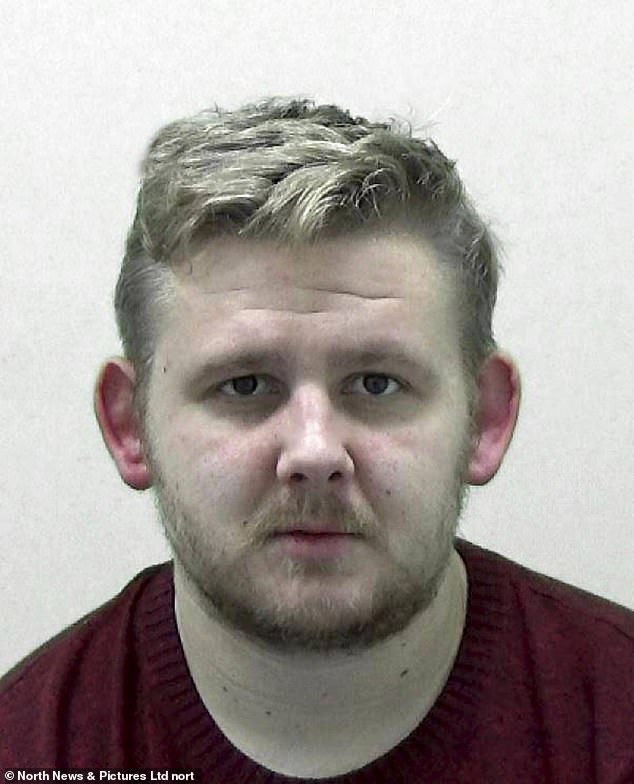 Nathan Blair, pictured, was jailed for two years and four months and was given an indefinite restraining order banning him from contacting Miss Potter or her mother, along with other conditions

An examination of the phone found he had called her 2,741 times in 14 days leading up to his police interview – an average of 195 times a day.

He was bailed by police but the harassment continued from a new phone number.

Mr Doig said: ‘She was bombarded with obscene and abusive messages on Instagram.

‘He sent a message saying he had sent a present to her young daughter.’

Blair was arrested for stalking again on December 21, denied it and was still not charged.

In February, ahead of him returning to the police station to find out if he was to be charged, he sent messages trying to get her to drop the case.

He threatened to ‘ruin your life’ and warned ‘I will turn up’ if she didn’t agree to his demands.

That same month, he also sent a message saying he was from Fathers For Justice, claiming a social worker had been told she was a drug addicted sex worker who was using drugs around her child.

Mr Doig said: ‘The pattern of offending continued in a similar manner.

‘There are multiple abusive Instagram messages, multiple threatening messages, messages suggesting he was watching her or her family.’

On April 18, he was remanded in custody by magistrates and she got some respite but he was then granted bail by a crown court judge on April 27 – and went straight back to harassing her that same day.

One message had a reference to ‘let’s start killing’ and he reported her to social services, saying she was neglecting her child and that the child should be removed.

In May, he sent messages to an agency that hired Miss Potter, saying she was a prostitute. Mr Doig said she has never been a prostitute and that ‘she’s a model who has sold pictures of herself’. 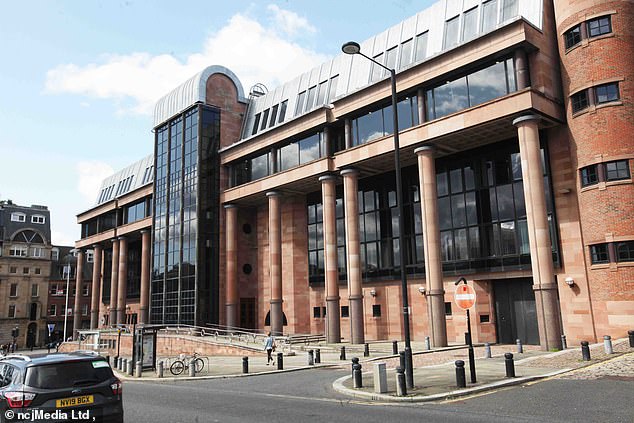 Newcastle Crown Court, pictured, was told Blair ‘became completely obsessed with her for whatever reason and ruined her life for a considerable period of time’

Mr Doig said she provided a victim impact statement about the effect the ordeal has had on her.

He told the court: ‘She’s worried about her safety as a result of his actions and is scared and frightened to walk in the area.

‘The case has had a significant negative impact on her.

‘He told her employers she was a prostitute, which she was not. It’s damaged her reputation and caused financial loss.

‘She had to cancel jobs and her personal relationships have been affected greatly.

‘She feels harassed, scared and doesn’t know what he will do next. She’s afraid to walk down the street again.

‘She says he is obsessed and feels he will never ever leave her alone.’

Miss Potter added: ‘I just want to it to stop, I can’t take any more of this behaviour. I need this to stop so I can live the life I want to live.’

Blair pleaded guilty to two counts of stalking and one of sending a malicious communication to the victim’s mother.

He was jailed for two years and four months and was given an indefinite restraining order banning him from contacting Miss Potter or her mother, along with other conditions.

The court heard he had been cautioned in June last year for harassing her.

Judge Amanda Rippon told him: ‘Your conduct was designed to maximise distress.

‘You became completely obsessed with her for whatever reason and ruined her life for a considerable period of time.’

Ben Campbell, defending, said: ‘It’s a sad case in which Mr Blair has allowed his feelings and relationship with the complainant to significantly cloud his behaviour.

‘It’s conduct he very much regrets. He has thrown away what appeared to be good prospects in life – he was due to enter the final year of university.’

Mr Campbell said Blair had written: ‘I can only hope she can make a good life for herself and we can both move on from this.’