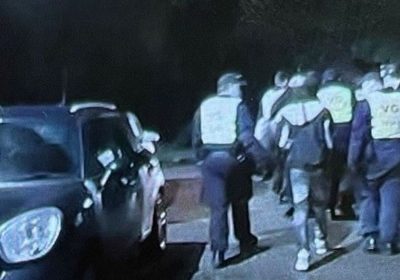 A busy house party was broken up by police last night after they were alerted that those inside were breaching Covid rules.

The eighteen attendees have since been fined nearly £15,000 after flouting government guidelines and heading to the party on Bury Road, Sewardstonebury, Essex.

At around 5pm on Saturday, January 30, police officers were called and attended the property, only to be refused entry by partygoers, who claimed they were working, making a music video.

Officers gained entry into the rented property after witnessing even more partygoers turn up while they were at the scene, EssexLive reports.

They then found a whopping 18 individuals partying inside the trashed house, which had countertops full of booze, smoke machines and party lights set up.

The party was quickly contained, with Essex Police preventing additional people from attending and also fining those present before sending them home.

However, this isn't the first time that this particular household has caused problems for the police force.

Essex Police attended two previous unlawful gatherings at the same property in Sewardstonebury – one on New Year’s Eve and one earlier this month.

An investigation is now underway to establish whether all three were organised by the same person, and Essex Police are working to put measures in place to prevent the future unlawful use of the property.

All 18 people present – including 17 people from London and just one from Essex – were fined £800 each.

The increased fine comes after the introduction of higher penalties last week for those caught attending illegal house parties of 15 people or more.

Following the incident, Essex Police’s Deputy Chief Constable Pippa Mills, said: "This party was a clear and blatant breach of the current restrictions which were put in place to save lives and protect the NHS.

"These selfish individuals not only have no regard for their own safety, but they clearly didn’t give a second thought for the safety of the local community, the police officers who had to attend to deal with their reckless behaviour or the NHS who are under unbelievable pressure."

Mills continued: "The legislation exists for a reason, which is to stop the spread of coronavirus, protect the NHS and save lives. It relies on us working together to drive down the risk of infection.

"The overwhelming majority of people continue to do all they can to support us and help stop the spread of the virus and it is only a selfish few, such as these individuals, who think they can flout the rules with no thought for the health risk posed by their actions.

"But, as the robust action we have taken in this instance demonstrates, Essex Police will simply not tolerate anyone in our county, or visiting our county, who blatantly and flagrantly break the law and put the lives of the people of Essex at risk."

If you have any information about who organised this event, do the right thing and call our detectives at Loughton CID by calling 101 or Crimestoppers anonymously on 0800 555 111.

A spokesperson for Essex Police said: "We want people to continue to report Covid breaches.

"You can make reports via our website by using our Digital 101 service, where you can speak to one of our operators here between 7am and 11pm."

Alternatively, you can make a report here.