Poland’s membership of the EU was plunged into uncertainty after its judges defied a European court order to reverse some of its controversial judicial reforms.

Stanislaw Piotrowicz, a senior Polish judge, said that interim measures by the EU’s highest court, which ordered Warsaw to suspend the reforms on Wednesday (Thursday AEST), were “not in line” with the Polish constitution.

The defiant ruling is the first of two verdicts due to be issued this week by Polish judges which appear to question a fundamental requirement of EU membership: that EU law takes precedence over national laws. 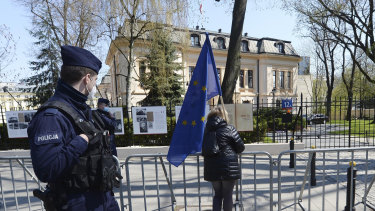 A woman holds a European Union flag outside the Constitutional Tribunal, background in Warsaw.Credit:AP

The ruling prompted Guy Verhofstadt, an MEP and former chief Brexit co-ordinator, to warn that Poland’s Eurosceptic government was trying to drag the country out of the bloc.

“Against the wishes of the vast majority of Polish people who want an EU future, the populist governing PIS [Law and Justice] party is determined to take Poland out of the EU,” he wrote on Twitter. “Will anyone act to stop them before it is too late?” he added, and claimed that the rule of law in Poland was breaking down.

The Polish ruling came after the European Court of Justice issued an interim order for Warsaw to suspend its “disciplinary chamber” of the Supreme Court, which was part of measures to overhaul the Polish legal system.

Under the Polish reforms, which came into effect in February 2020, the disciplinary chamber has powers to strip judges of immunity and cut their salaries.

The reforms also prevent judges from referring certain points of law to the ECJ.

The PIS party, a Right-wing populist and Eurosceptic movement, has clashed with Brussels for years over the hugely contentious reforms.

Warsaw has argued that the reforms will tackle corruption and root out communist-era judges, but critics say the true purpose is to undermine the role of EU law and open the door to Poland quitting the EU.

Human rights groups are also concerned the reforms would undermine the independence of the Polish judiciary as they could allow the government to expel judges on political grounds.

A further confrontation with Brussels could erupt today, when Poland may issue another ruling that will decide whether EU law has primacy over Polish law.

MEPs reacted with shock to the ruling yesterday which raised fears that Poland would leave the EU.

“The refusal to implement rulings of the European Court of Justice in Poland is a clear step towards taking Poland out of the European Union,” Jeroen Lenaers, a Dutch MEP, said.

“We fear that the Polish government is on the path to Polexit,” he added.

“We are in the process of a legal Polexit which is taking place step by step,” Adam Bodnar, Poland’s independent human rights ombudsman, told reporters after the ruling.

Since 2004 when Poland joined the EU, polls have consistently shown support for remaining in the bloc.