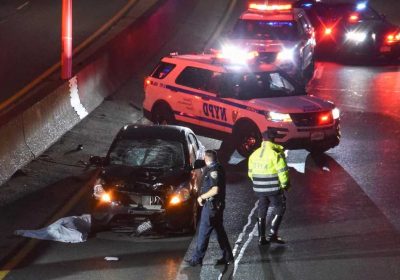 One child killed, another critically injured in Brooklyn crash

Man busted for drunk driving on his birthday after killing pedestrian

A man was struck and killed by a car while crossing the Bronx River Parkway early Sunday morning, cops said.

The man, who wasn’t immediately identified, was crossing the roadway near Exit 3 when he was hit by a 2019 Nissan sedan around 3:50 a.m., according to cops.

The victim had “severe trauma about the body” and was believed to be in his 30s, police said.

He was pronounced dead at the scene.

A photo from the crash scene shows the victim lying next to the vehicle, which has a smashed front bumper and windshield.

The 25-year-old driver remained at the scene and there were no immediate charges, cops said.