Police arrest of one of seven 'key members' of Kinahan cartel 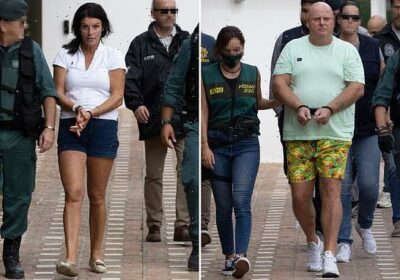 Police have dealt a devastating blow to the Kinahan cartel with the arrest of one of their seven ‘key members’ at his Costa del Sol bolthole.

The bald-headed Greater Manchester-raised expat, identified earlier this year by US authorities as a Kinahan enforcer and money launderer, smiled initially after being surrounded by cops and cuffed.

But his grin turned to a grimace as he was led away and tried to hide his face when he realised press photographers were about to get a snap of him in his eye-catching tropical shorts and T-shirt.

And his wife Nicola, CEO of a Scotland-based vodka firm linked by police to organised crime, raised her middle finger as she was walked out by armed Spanish cops behind him.

The pair appeared in court yesterday after spending two nights in police custody. 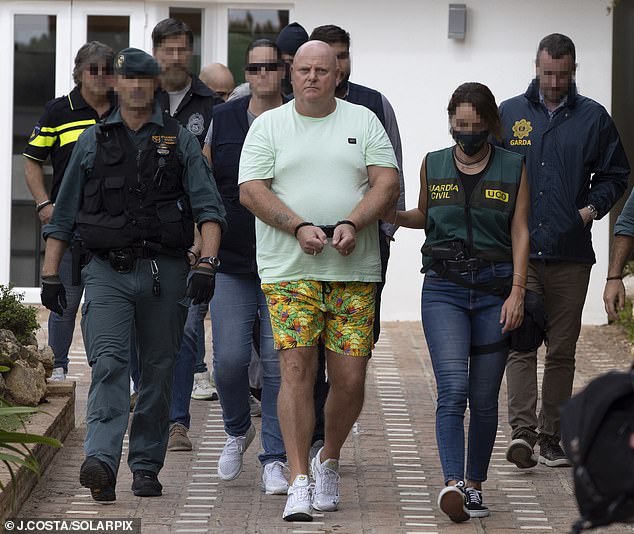 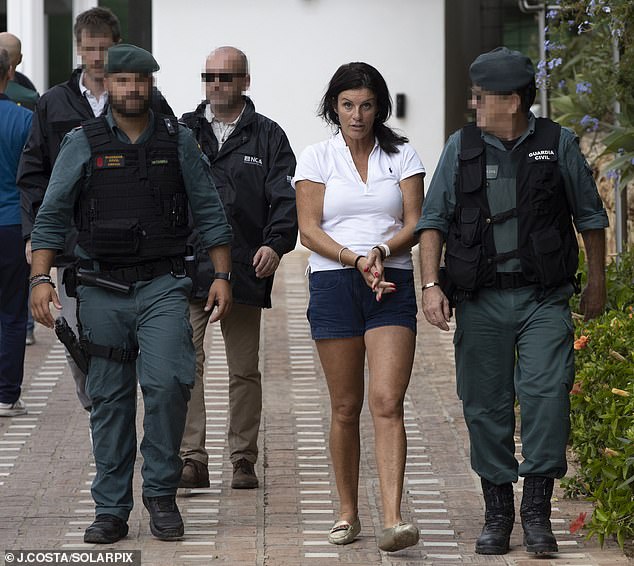 His wife Nicola, pictured centre, CEO of a Scotland-based vodka firm linked by police to organised crime, raised her middle finger as she was walked out by armed Spanish cops behind him. The pair appeared in court yesterday after spending two nights in police custody

Well-placed sources said Nicola had been released after questioning but her husband had been remanded in custody along with a second person arrested as part of the police operation.

Spanish police are yet to make any official comment on Monday’s arrests, and are not expected to do so until later today at the earliest.

But it can now be revealed former Rochdale doorman Morrissey, nicknamed Johnny Cash when he ran a restaurant in Cork in the nineties, was held on suspicion of crimes including money laundering following an operation led by Spanish police and coordinated across two continents.

The detentions took place five months after the 62-year-old was identified as a key player in the Kinahan Cartel and just over a week after it emerged Gardai were analysing crucial information that could help prosecute members of the notorious criminal gang.

Irish passport holder Morrissey was one of seven people hit with sanctions in April and named by the US department of the Treasury’s Office of Foreign Assets Control (OFAC).

The US authorities said of the underworld figure, so close to alleged cartel boss Daniel Kinahan he was invited to his wedding in Dubai in the summer of 2017: ‘John Morrissey has worked for the Kinahan Organised Crime Group (KOCG) for several years, including as an enforcer, and facilitates international drug shipments for the organisation from South America. John Morrissey is also involved in money laundering.

He was included on the list alongside the likes of Daniel, described in the same statement as ‘playing an integral part in organising the supply of drugs in Ireland’, his dad Christopher and veteran Dublin-born criminal Bernard Clancy.

The other people named as part of a $5 million (£4.3 million) appeal for information were Christopher Kinahan Jnr, Daniel Kinahan’s ‘advisor and closest confidant’ Sean McGovern and Ian Dixon who was arrested over the 2015 Costa del Sol murder of Gary Hutch but never charged.

Nero Drinks Company Ltd, the vodka firm based at an address in Glasgow which Scots mum Nicola Morrissey runs with her husband, was one of three companies included in the list and banned from trading in the States.

Johnny, who courted celebrities including models and reality TV stars as the ambassador of his wife’s drinks business, fled Ireland more than 20 years ago after reportedly being involved in a bid to harm a Criminal Assets Bureau officer there.

Spanish police are believed to have searched several properties with a court warrant including Morrissey’s house near Marbella and business addresses as part of the operation which resulted in his arrest. 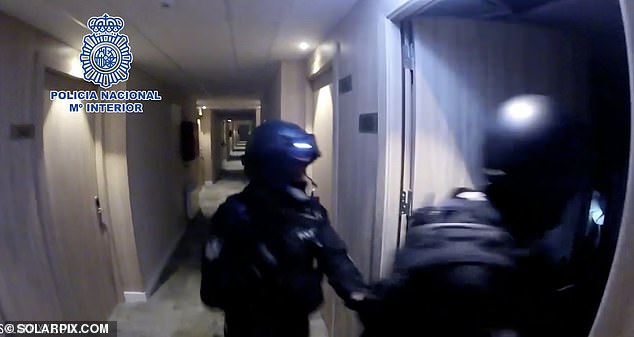 Pictured: Police footage of the arrest of another member of the Kinahan Cartel in Spain in 2017

It was led by the Civil Guard Unit’s elite Central Operative Unit, responsible for the investigation and prosecution of the most serious forms of crime and organised crime.

Rapid response Civil Guard units USECIC and GAR, whose officers are trained to deal with everything from nuclear threats to terrorist incidents, also lent their support.

Morrissey is the first of the men named and sanctioned by US Department of the Treasury’s Office of Foreign Assets Control to face arrest since the list of the KOGC’s seven ‘key players’ was made public.

One well-placed source said last night: ‘Although he’s the first we don’t expect him to be the last and are working on making sure others fall soon.’ 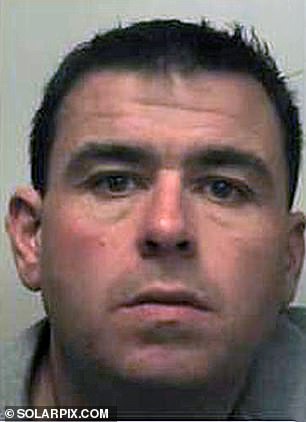 Gary Vickery, 38, pictured, another member of the Kinahan Cartel

The Kinahan cartel gained notoriety around the world over a feud with the rival Hutch gang which has led to the deaths of at least 18 people in Ireland and Spain. Fugitive boss Gerry ‘The Monk’ Hutch was arrested in August last year near his bolthole in the Costa del Sol resort of Fuengirola and is due to be tried later this year for the February 2016 murder of David Byrne at the Regency Hotel in Dublin.

BBC’s Panorama exposed Daniel Kinahan’s influence in world boxing in a documentary last year which led to calls for tighter regulation of the sport.

Two-time world heavyweight champion Tyson Fury reportedly dropped the Irishman as his negotiator after his ‘instrumental’ role in brokering a two-fight deal with rival Anthony Joshua was outlined. Fury had previously thanked Kinahan on Instagram.

The 45-year-old Dubliner, now based in Dubai, insisted after the Panorama programme:’ I am not part of a criminal gang or any conspiracy. I have no convictions. None. Not just in Ireland but anywhere in the world.’