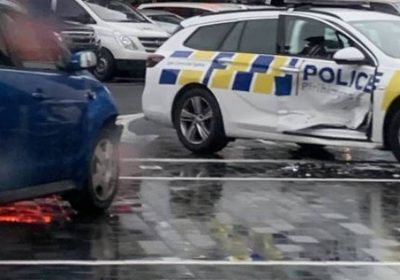 A 60-year-old woman is due to appear in court today after she allegedly rammed her car into a police vehicle in downtown Auckland.

She is facing charges that include driving a motor vehicle in a dangerous manner and assault with a weapon.

A police spokesman told the Herald this morning the woman is set to appear in the Auckland District Court.

Police were called to downtown Auckland yesterday morning, just after 8am, after a report that a person was driving on the wrong side of the road on Quay St.

Video footage later emerged showing the moment a blue car can be seen driving into a stationary police vehicle near Princes Wharf.

A post shared by The New Zealand Herald (@nzherald)

Witnesses described their shock and disbelief.

One woman, who wanted to be known as Isabella, said she had been standing at the intersection near the Viaduct when she says she heard a police officer shouting for the blue car to stop.

She took shelter behind a nearby pole moments before the car allegedly did a U-turn and rammed into the driver’s side of the police vehicle.

Isabella said immediately after the collision, the police officer who had just got into his vehicle climbed out the passenger’s door.

The woman at the centre of the incident was later brought to the ground after being tasered by police officers who arrived at the scene shortly afterwards.

Another pedestrian, who asked not to be named, earlier said the driver was beeping her horn as she drove down the road.