Police to shut down Melbourne CBD ahead of anti-lockdown rally 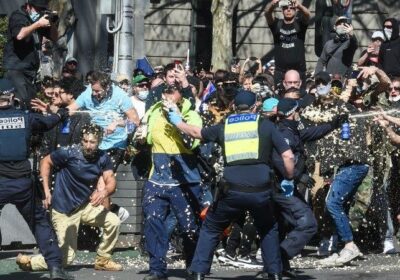 Melbourne’s CBD will be shut down this weekend in an effort to thwart an anti-lockdown rally planned for city streets.

Chief Commissioner Shane Patton said more than 2000 police – more than double previous protests – will lock down the CBD with barriers and public transport in and out of the city will be halted from 8am to 2pm on Saturday. 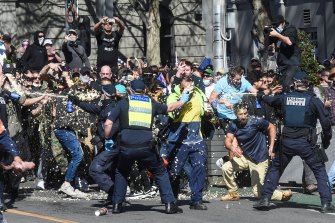 Police and anti-lockdown protests clash near Parliament House during a rally in August.Credit:Justin McManus

Two hundred arrests were made after more than 4000 people descended on the city for the last anti-lockdown rally on August 21. Mr Patton said intelligence suggested thousands more may be planning to attend this weekend’s protest in breach of lockdown restrictions, which could make it the largest rally in Melbourne since 10,000 people protested the World Economic Forum in 2000.

“This is the biggest game in town for us, to stop this occurring,” Mr Patton said. “There’s nothing more important than what we’re about to embark on this weekend to stop this protest.

“We’ll do everything we can to prevent access to the city.”

Mr Patton also revealed that the longer restrictions go on the more likely it was that people would be fined. He said the longer and heavier the lockdown the greater the temptation was for people to break the rules. 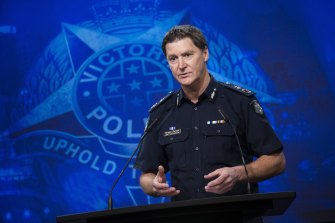 Numbers though show fewer people are being penalised this lockdown than during last year’s tough lockdown, with just 200 fines issued across last weekend and 58 in the past 24 hours.

Based on data released during the same time last year, fines issued during August and early September last year averaged upwards of 420.

In June, police said they’d issued 37,939 fines since the start of the pandemic early last year, with only 25 per cent being paid.

The bulk of the unpaid fines – about 25,000 – remain with Fines Victoria for enforcement.

Mr Patton said on Wednesday that he did not know how many fines from the last lockdown protest remained unpaid, but would not rule out shutting down public transport to the city again in the future with anti-lockdown protesters adamant they’ll continue to march monthly until restrictions end.

“I’m not going to try and apply a crystal ball to what might or might not occur in the future,” he said.

At St Kilda beach on Wednesday, residents spoke of tiring of the ongoing tight restrictions, of losing work, mental health battles and of a push for restrictions to be eased to encourage compliance for others.

Lukanda Teziggwa said he was worried about his friends who, like him, were spending unhealthy amounts of time alone. Many of them, he said, were also out of work. 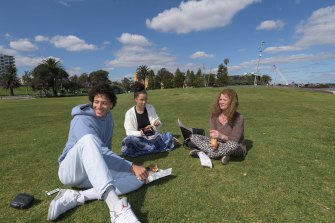 His sister Lakeri Teziggwa said she’s been unable to work for a lot of the past two years, yo-yoing in and out of work when she could, and was particularly concerned about the financial welfare of other women who were largely ineligible for financial support from the government.

The 21-year-old said she believed people would be more likely to follow lockdown restrictions if some restrictions were eased, including outdoor activity.

She said her brother was fined earlier this year for failing to wear a mask, despite having a medical exemption, which was later overturned and was recently visited by police at his CBD apartment after a neighbour dobbed him in for having a single bubble friend.

It has led to the pair now feeling anxious when they left home, worried they may inadvertently do the wrong thing. 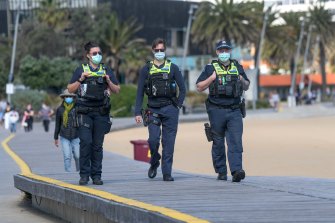 Police patrol as People head out to St Kilda beach for their 1 hour exercise during the 6th COVID 19 lock down.Credit:Joe Armao

“There is such a big push back toward it because the rules are so strict. [The government] they’re working against themselves when they make it so strict,” Ms Teziggwa said.

“I feel so bad for people who live in apartments without a balcony and who are told to stay inside. You’re only allowed outside for one hour a day.”

Ms Teziggwa’s comments come just days after Romain Ragonnet, an infectious disease modeller at Monash University, said keeping people subject to strong restrictions for longer than required could result in them making up their own rules.

Police Association secretary Wayne Gatt said he believed that the community would largely continue to do the right thing and follow the rules, as seen during the past 18 months. 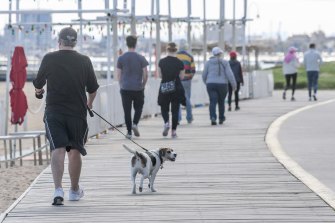 People enjoying some fresh air and a walk at St Kilda beach on Wednesday.Credit:Joe Armao

“I think along the entire COVID-19 journey police have seen varying levels of compliance at different times and part of that has been a period when communities have needed support and education. While others have been quite wilful and blatant breaches … we’ve got to recognise that has been occurring over a long period of time. The best approach is to work with the community. We should never forget that,” he said.

“No police force or body is going to have enough people to stand at every ticket box at the front of every supermarket, in every coffee shop, in every hotel to check each and every element of the [Chief Health Officer’s] directions.”

On Saturday, city workers will need to prove they’re essential workers to gain access to the city, with access points to be erected 600 metres from the CBD fringe. 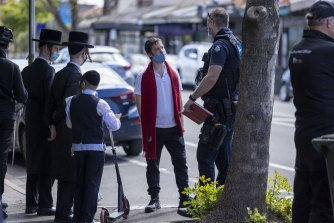 Police were on patrol in Ripponlea on Wednesday.Credit:Wayne Taylor

Police were on patrol in Caulfield and Ripponlea throughout Wednesday, including near a synagogue where there was a large gathering of ultra-Orthodox worshippers last week, ahead of Yom Kippur, the holiest day of the Jewish year.

Mr Patton said those who had breached the rules in recent weeks represented a small minority of Melbourne’s Jewish community.