Policewoman, 36, who showed a photo of a detective’s erect penis to colleagues when he sent it to her is told she can keep her job

PC Katie Jackson, pictured outside court, showed the explicit image on her mobile phone to several officers at Goole Police Station, East Yorkshire, despite being told by her senior officer not to

A female police officer who showed colleagues a picture of another officer’s private parts has managed to keep her job.

PC Katie Jackson, 36, was given a final written warning for showing the explicit image to other officers after her actions were found to have been ‘misconduct’.

The hearing was told the Humberside Police officer was seen laughing in amusement after receiving a snap of a detective constable’s penis.

She had shown the explicit image on her mobile phone to several officers at Goole Police Station, East Yorkshire, despite being told by a senior officer not to.

But later she had told colleagues she felt embarrassed and upset at receiving the ‘unwarranted picture’, a misconduct hearing at Goole Magistrates’ Court heard.

She is also alleged to have breached standards by not attending work after the assault because she stated she was sick to injuries which had allegedly not occurred.

Both of these charges were ‘not proven’ by the independent police panel.

Chair of the independent police panel, Louisa Cieciora told the hearing: ‘We are not satisfied she lied about her absence from work.’

However, Jackson was found to have caused upset and distress to a number of colleagues by showing an explicit image to fellow officers on September 23, 2016.

It was found her behaviour was deemed as misconduct after ‘ignoring advice given to her by a senior officer,’ Ms Cieciora told the hearing.

It breached the Standards of Professional Behaviour in respect of Authority, Respect and Courtesy, Duties and Responsibilities and Honesty and Integrity contrary to Police (Conduct) Regulations 2012. 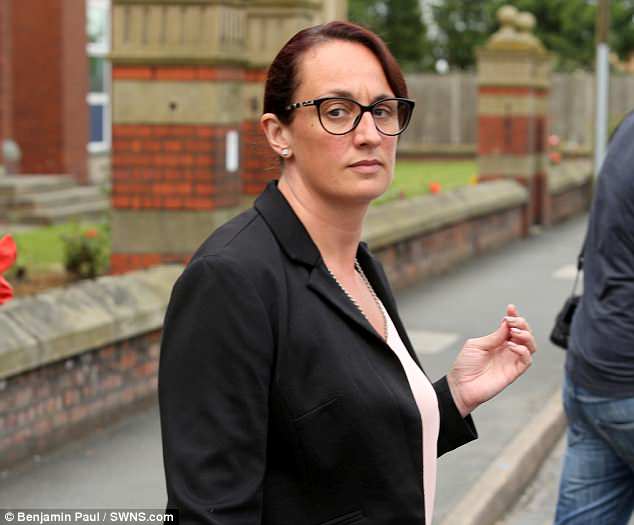 An attempt was made by members of the press to lift the reporting restriction given to the officer who sent the picture. However, the panel dismissed the argument.

Upon leaving the hearing, Jackson, who wore a sand-coloured top and purple-coloured hair tied back in a bun, said: ‘No comment.’

Commenting on the case, Humberside Police Det Supt Matthew Baldwin said: ‘We and the public we serve rightly expect our officers to display the highest standards of honesty, integrity, and respect – whether they are out on duty or with their colleagues – and these expectations have not been met by PC Jackson.

‘Her actions were not acceptable and as soon as the allegations came to light we carried out a full investigation into the circumstances.

‘Her decision to share an explicit picture of a colleague with other colleagues – after being told not to do so – showed a lack of respect and courtesy to the people she was working with.

‘Our Professional Standards Department must uphold the standards of professional behaviour of both officers and staff. This work is vital in contributing to the values of the organisation, its culture and behaviours.’