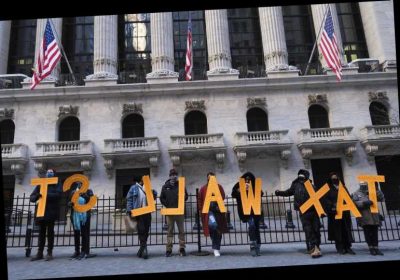 IRS may have let $57M in ‘erroneous’ tax breaks slip through: watchdog

Still waiting for stimulus? When delayed checks may arrive

ALBANY — Democratic state lawmakers keen on raising taxes on higher-income earners to help close the state’s massive, multi-billion dollar deficit have introduced a new bill that would place an extra tax on investments.

The new legislation — sponsored by Democrats state Sen. Gustavo Rivera (D-The Bronx) and Assemblyman Ron Kim (D-Queens) — would place a new state tax on capital gains in addition to existing federal taxes on investments set between seven and 17 percent depending on income tier.

The politicians argue the existing federal tax unfairly caters to the rich and they estimate the measure — if approved — could raise up to $7 billion dollars in state revenue annually.

“Most of the super-wealthy, including those big hedge fund managers trying to make millions by shorting GameStop, make their income through their investments or capital gains, which are federally taxed at a lower rate than regular income from labor,” Kim told The Post.

“By offsetting the preferential rates, we can collect more than $7 billion in new revenues.”

The Empire State, already one of the highest taxed in the nation, is seeking an estimated $15 billion over the next two years in federal aid from the Biden administration, which Gov. Andrew Cuomo made a cornerstone of his Fiscal Year 2021-2022 State Budget Address delivered last month.

Cuomo has been loath to raise taxes to stave off the revenue bleed from the pandemic, but included in his budget proposal a measure that would raise income taxes on the top rate of 8.82 percent to 10.8 percent.

That would climb to 14.7 percent for New York City residents who pay a combined state and local income tax rate — which would make the Big Apple home to the highest tax in the nation, surpassing California currently at number one with a 13.3 percent tax rate.

But Cuomo has worried about the wealthy residents leaving New York for a friendlier tax environment — like Florida — acknowledging he needs the rich to help boost state coffers.

The state budget has an April 1 deadline.