A riot was declared in Portland late Wednesday after hundreds of protesters marched on an Immigration and Customs Enforcement (ICE) building, where they reportedly spray-painted expletives on the facility's windows and threw toilet paper at officers, according to reports.

A riot was declared just before 11 p.m. after a few demonstrators threw items at the building – located in the southern part of the city — which broke at least one window, The Oregonian reported.

Federal officers would exit the facility before they pushed protesters to the street. Police then ordered people near the building to disperse, including media and journalists.

PORTLAND ATTACK VICTIM SAYS HE TRIED TO STOP ROBBERY: 'THEY WOULDN'T LET ME GET UP'

Residents were advised to go indoors for their safety, according to video taken by Sergio Olmos of Oregon Public Broadcasting.

Roughly 200 protesters had marched on the building from a local park around 9:30 p.m., during the 84th night of protests in the city. As the crowd drew closer, federal officers were reportedly seen looking out of the building's windows, according to the paper. When they arrived, a dozen or so pounded on the windows, while others were seen chanting, playing music, and singing.

Despite an announcement that warned against damaging the building, protesters would spray-paint expletives on the building’s windows and attempted to break some of them. Traffic cones were also used to block security cameras. Their actions had prompted federal officers to exit the building for the first time and spray pepper balls to push them away.

A few protesters responded by throwing water bottles and toilet paper rolls at the officers in the area, which caused police to declare the gathering an “unlawful assembly.”

Around midnight, a crowd of about 100 would gather and set fire at an intersection a few blocks north of the ICE building, the Oregonian reported.

Demonstrators threw two restaurant benches into the blaze and at least one protester was captured on video surfing on a bench while banging on a drum.

Residents would soon have enough of their actions, despite showing support earlier in the night. Some yelled at protesters to be quiet while others threw liquids out of their windows, according to the paper. 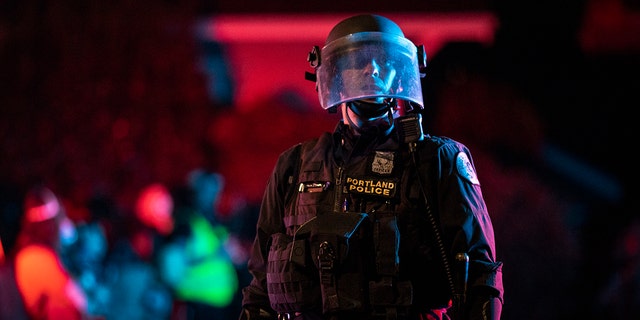 Portland police are seen in riot gear during a standoff with protesters in Portland, Oregon on August 16, 2020. (Photo by Paula Bronstein/Getty Images)

The unrest came one night after a riot was declared when protesters lit fires, threw rocks and smashed windows at county government offices in the city, reports said. The violence led to two arrests, police added.