Portrait of Theresa May at Oxford University taken down A picture of Theresa May has been removed from the walls of her old geography department at Oxford University after left-wing students protested against it.

The portrait of the PM was unveiled on the ‘Wall of Women’ staircase last week as part of an exhibit that celebrates women who studied at the department and went on to be pioneers in their fields.

But it attracted protests from students who said her crackdown of illegal immigration while at the Home Office led to the Windrush fiasco.

Students complained that  she was a ‘contentious figure in a department with many EU citizens and de-colonial scholars’ and a campaign group called ‘NotAllGeographers’ was set up to call for its removal.

It remains unclear if Oxford University authorities took the decision to take the portrait down, or if it was done by students acting alone. 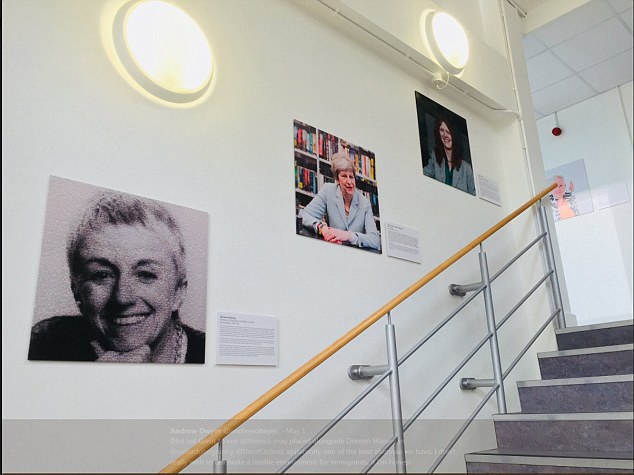 Theresa May’s portrait was hung on the staircase as part of the ‘wall of women’ exhibit celebrating the achievements of female former students. Below the PM is an image of Doreen Massey who teaches Marxist and feminist geography 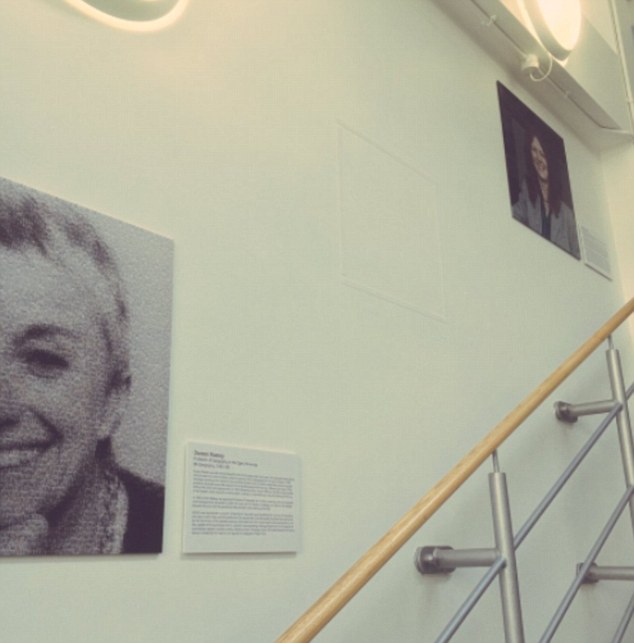 But within days of its unveiling, Theresa May’s portrait had been removed from the wall after students slammed the decision to hang it there in the first place 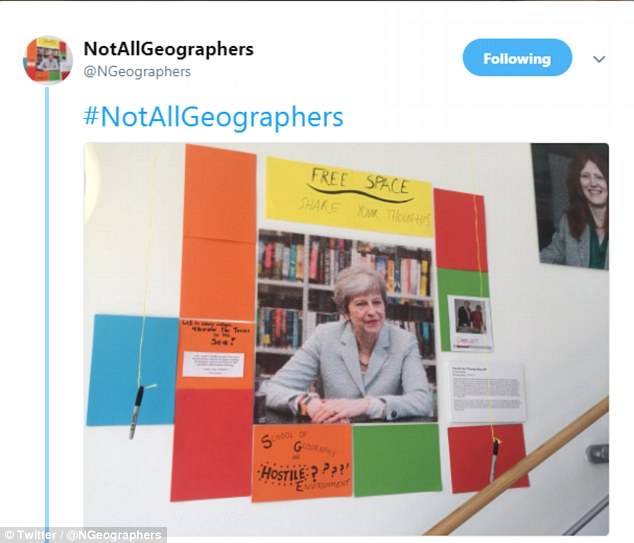 Students at the faculty pinned up post-it notes around the portrait slamming her policies.

And within days of the furore the portrait has now been taken down – with campaigning students hailing their success online.

Tory MP James Cleverly tore into the decision on Twitter, saying: ‘Please tell me this story about you removing an alumna portrait of the Prime Minister isn’t true. @oxfordgeography.’

Mrs May graduated with a second-class degree from St Hugh’s College at Oxford University  in 1977.

She was originally one of twelve alumnae to feature in the display which was intended to ‘aim to inspire the next generation of women geographers to aim high in their future careers’.

In a note alongside the picture, Mrs May – who studied at the university from 1974 to 1977 – said: ‘I remember the School of Geography as a great place to meet, learn and enjoy finding out more about our world…

‘A greater understanding of the diversity and complexity of our world and a respect for our environment, which I learnt in my degree, have stood me in good stead in my chosen career.’

Claire Hann, the School’s Equality and Diversity Officer, told Cherwell student newspaper: ‘The aim is to show that the achievements of the few selected women represent and are linked with the achievements of a much wider group of women geographers.

‘We’re keen to celebrate the successes of our women students and staff as much as those of men. It’s been great to reconnect with many of our past students through this project, and we hope it will inspire our current students as they pass by the display each day.’

On Friday students had stuck up pieces of paper around the picture, with a pen attached to a piece of string inviting others to ‘share your thoughts’.

One student wrote next to the picture ‘School of Geography or Hostile Environment’, referring to Mrs May’s approach to illegal immigration when she was Home secretary.

One student wrote: ‘School of Geography and (Hostile????) Environment’ [sic], while another message said: ‘Let in every refugee, throw the Tories in the sea.’

Andrew Dwyer, a cyber security and geography student, wrote on social media: ‘(Not so) Great to see Theresa May placed alongside Doreen Massey in [the School of Geography], apparently one of the best alumnae we have.

‘I don’t really wish to celebrate a hostile environment for immigrants, if I’m honest.’

Number 10 declined to respond to questions about the removal of the portrait.