Post-COVID deaths raise question of how pandemic mortality is measured 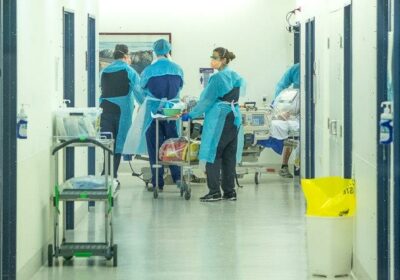 The number of deaths attributed to lasting impacts of COVID-19 has doubled over the past two months as Australia grapples with how to measure the mortality caused by the pandemic.

Fewer people died from and with coronavirus in March than in the previous months of 2022 after summer’s Omicron wave led to record numbers of virus deaths, according to provisional mortality data by the Australian Bureau of Statistics released last week. 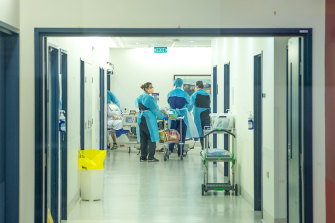 The number of people who died of and with COVID-19 is believed to have declined in March.Credit:Justin McManus

Although rates are still extremely low, there was an increase in the small number of deaths registered as “long COVID” being the cause – 14 in March, up from eight in February.

Australia had previously registered 20 deaths due to long COVID, described by the bureau as “long-term conditions including chronic lung conditions that are the result of the virus”. A spokesperson said these were included in the overall COVID death toll because they were “still due to COVID-19 from an underlying cause perspective”.

Physicians at St Vincent’s Hospital’s long-COVID clinic in Sydney said they had not seen deaths from long COVID by itself – characterised by ongoing fatigue and “brain fog”, muscle pain and shortness of breath – and those registered had probably incurred lung damage, such as pulmonary fibrosis, from severe infections.

“What we are also seeing in people with long COVID is the risk of developing heart disease is increased and those events are more severe,” professor Steven Faux, who co-leads the clinic, said.

“We are telling GPs who are sending patients to our clinic to make sure their cardiovascular risk factors are optimal for at least one to two years after infection.”

Carol Hodgson, a professor of acute and critical care at Monash University, said it was unclear how mortality from long COVID would trend.

“We probably haven’t had enough time to answer that question very well,” she said, noting Australia had some of the world’s best virus survival rates.

In a study of 200 patients admitted to intensive care for COVID-19 and following them for six months after discharge, Hodgson found mortality for COVID patients and other intensive care admissions was comparable.

“That is what we have seen in the sickest patients,” she said.

Adrian Esterman, a professor of biostatistics and epidemiology at the University of Adelaide, said the issue with measuring long COVID deaths was the lack of case data. Studies showed 20 per cent of patients had persistent symptoms eight months after infection in 2020, but prevalence after Delta and Omicron is not known.

By the end of March, 174 deaths had been registered as due to COVID-19, compared to 951 in February and 1540 in January. The March figure will increase as more deaths are registered, although state health departments recorded fewer deaths than earlier in the year.

People who died with COVID-19, but without it being their underlying cause of death, also declined due to lower case numbers in the community.

Health officials have started to discuss changes to how mortality from the virus is measured.

“What we are also seeing in people with long COVID is the risk of developing heart disease is increased and those events are more severe.”

Instead of daily death updates, chief medical officer Paul Kelly suggested in a recent senate estimates hearing overall excess death – a measure of whether deaths from all causes were higher or lower than expected – could become more appropriate.

The bureau reported 5090 excess deaths in 2021, an increase from 2020 when 1734 fewer deaths occurred than were predicted. The excess mortality across both years was similar to that of the 2017 flu season.

Lauren Moran, the bureau’s director of mortality statistics, said Australia had a “relatively low” mortality rate compared to other countries in 2020 and 2021.

But experiences have varied among states. More than half of 2021’s excess deaths were in Victoria. NSW registered 168 fewer deaths than expected.

“Victoria was really the only state in 2020 that had that second COVID wave,” Moran explained. The bureau’s model assumes lower mortality year-on-year, but this was not the case in Victoria between 2019 and 2020.

The Actuaries Institute measures excess deaths against its own estimate of pre-pandemic mortality using the bureau’s data.

“Our expectation is that there will be nearly 10 per cent excess deaths in the first quarter of 2022,” Jennifer Lang, who convenes the institute’s working group, said. Mortality figures for January will be released later this month.

“The usefulness of excess deaths is it takes away any accusations of bias in determining what is a COVID death and what isn’t,” Lang said.

“But it is a very lagging indicator. Daily death figures give a better perspective on what is happening in the community right now.”

Esterman said measuring excess deaths was especially necessary in countries where doctors were not certifying deaths as caused by the virus.

Ian Marschner, a professor of biostatistics at Sydney Medical School, modelled NSW’s coronavirus waves in terms of “mortality deficit”: whether there were fewer deaths than would be expected in an unvaccinated population.

He urged for caution when interpreting excess mortality modelling, stressing the impact restrictions had on other causes of death, including lower rates of flu. He said the age of cases was most important when comparing mortality between countries or outbreaks.

“The 2020 outbreak in Victoria, for example, was quite an old outbreak in terms of the age structure, and we saw quite high mortality, but that was not because the virus was more dangerous during that period.”