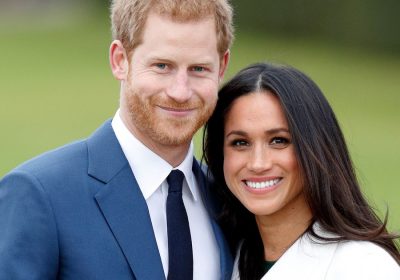 Prince Harry and Meghan Markle have replaced their Sussex Royal logo with their new Archewell emblem.

The Duke and Duchess of Sussex were criticised for still using their official royal cipher, the letters H and M with a crown on top.

But now the pair have started to use the logo from their Archewell foundation on official correspondence, with the change revealed in a letter that Meghan sent to a London school for International Women's Day.

The note sent to Robert Clack Upper School in Dagenham, east London, shows Meghan, 39, urge students to "learn about the trailblazing women who came before us".

The couple's royal monogram was revealed shortly after their wedding in May 2018, and they had used it in all official correspondence.

But they were criticised for continuing to use it even after stepping back from official royal duties last year.

The Duke and Duchess of Sussex were stripped of their royal and sporting patronages by the Queen in February this year.

Archewell is the charitable foundation set up by the couple in 2020. Its website also plugs Harry, 36, and Meghan's commercial ventures with streaming services Netflix and Spotify.

The deals are thought to be worth well over £100 million.

Archewell is expected to focus on the issues the couple have been championing during the pandemic and before – racial justice, gender equity, climate change, mental health, online hate speech and empowering diverse voices.

Marketing executives have predicted it will become a "billion-dollar brand".

In Harry and Meghan's bombshell interview with Oprah Winfrey, aired on March 8 in the UK, the prince complained his dad Prince Charles had cut him off financially.

It was commercial deals such as those with Netflix and Spotify that put the couple at odds with the impartiality required of those in public service and seemingly led to a permanent split from the Royal family.