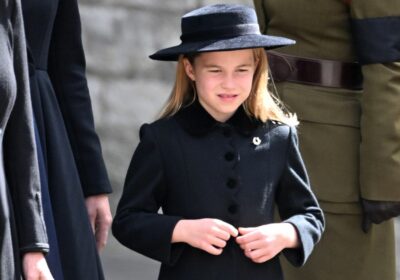 Princess Charlotte made a "sweet nod" to her great-grandmother The Queen with a tiny horseshoe brooch at her funeral in Westminster Abbey.

The youngster, seven, wore the small silver horseshoe apparently as a nod to the late monarch's love for horses.

Twitter user Royal Family Uk Fan wrote on the site: "Princess Charlotte is wearing her first piece of significant jewellery: a small diamond brooch in the shape of a horseshoe.

"A lovely tribute to a great-grandmother who so loved horses."

The brooch was gifted to the daughter of Prince William and Princess of Wales Kate Middleton by the Queen herself.

The youngster formed part of a procession with her brother and the rest of the Royal Family, following the coffin as it entered the church.

Members of public took to social media in reaction to seeing the young prince and his sister walk with their family.

Another commented: "Watching Prince George and Princess Charlotte walk behind the Queen’s coffin is heartbreaking."

A third questioned whether the occasion was too much for the youngsters, they tweeted: "It’s madness those two little children are involved in this. Poor Prince George looks scared stiff."

"It's seeing Prince George and Princess Charlotte there, that has me sobbing," added another.

Charlotte also wore a hat for the first time at the Westminster Abbey service.

It had been rumoured in the days leading up to the sombre ceremony that the children, as well as those of Prince Harry and Meghan Markle, would not be in attendance.

One fan tweeted: "My baby Charlotte with a hat – great grandma would be so proud."

And another wrote: "The pair are dressed in long black coats, with both wearing black hats tipped to the side of their heads.

"It is the first time Charlotte has worn this hat."

A third posted: "Princess Charlotte is so so beautiful her little hat."