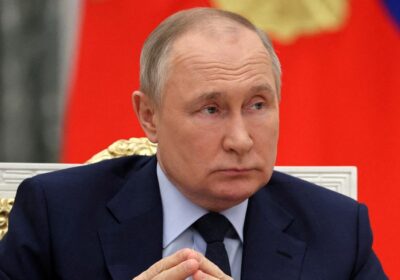 Vladimir Putin's invading Russian army has been mocked and labelled "fake" by Ukrainian resistance fighters who claim that their "state of the art" technology is actually incredibly basic.

As a result of Russia reigning hellfire down on Ukraine for two months, scientists in the country have had lots of projectiles to study in depth throughout the conflict.

And in a scathing takedown of Russia's military capabilities, some Ukrainian experts have taken to Telegram to myth bust Putin's prowess and explain why the vast majority of Russian missiles do not hit their targets.

Sharing an image of a deconstructed Russian cruise missile, the message began: "Russia is a fake country."

It continued: "Modern "Russian cruise missiles are equipped with electronics developed in the 60s of last century

"An analysis conducted by Ukrainian experts of X-55 cruise missile guidance and navigation systems, as well as their modifications X-555 and X-101, showed that 'modern' guidance units were developed in 1960-1970.

"The 'newest' missiles also use the PGI-2M navigation system. Developed in 1977.

"Most of the X-101 missiles launched on the territory of Ukraine did not hit the planned targets."

Putin had meant to send a chilling warning to those who "threaten" Russia – but when you're the bad guy of the entire world people are more likely to laugh at you than take you seriously as he is surely starting to learn.

He was soon mocked mercilessly for his posturing by being turned into the spitting image of fellow dictator crackpot Kim Jong-Un who is known for his missile launches.

Whether or not Putin looked pathetic, what is sadly true is how phenomenally advanced the missiles are.

Specifications of the mighty missile have not been officially revealed however it is understood to be able to fire up to 12 nuclear warheads in one flight, all the while dodging anti-missile systems.

It is referred to as a long-range weapon with good reason as the Sarmat intercontinental ballistic missile is believed to boast a maximum flight distance of 6,000 miles

Terrifyingly the missile is said to be capable of targeting an area the size of France, the Mirror reports.