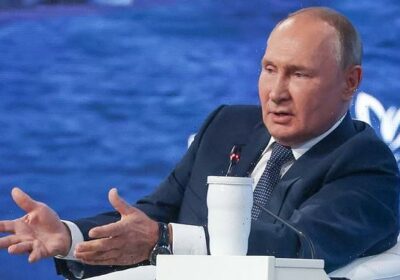 Russian President Vladimir Putin today said Russia will cut off energy supplies if price caps are imposed Russia’s oil and gas exports, warning the West that it would be ‘frozen’ like a wolf’s tail in a famous Russian fairy tale.

Putin told at an annual economic forum in the far-eastern port city of Vladivostok that European calls for a price cap on Russian gas were ‘stupid’, and would lead to higher global prices and economic problems in Europe.

The G7 leaders announced plans to impose a price cap on Russian oil exports last week in a move that could also restrict Russia’s ability to secure tankers and insurance from countries beyond the Group of Seven.

The Russian leader, 69, warned the leaders that Russia would walk away from its supply contracts if the West imposed price caps on the country’s exports, adding that Moscow will have enough customers in Asia.

‘We will not supply anything at all if it is contrary to our interests, in this case economic (interests),’ Putin said. ‘No gas, no oil, no coal, no fuel oil, nothing.’

He added: ‘We would only have one thing left to do: as in the famous Russian fairy tale, we would sentence the wolf’s tail to be frozen.’

‘Those who are trying to impose something on us are in no position today to dictate their will,’ Putin said.

‘They should come to their senses.’ 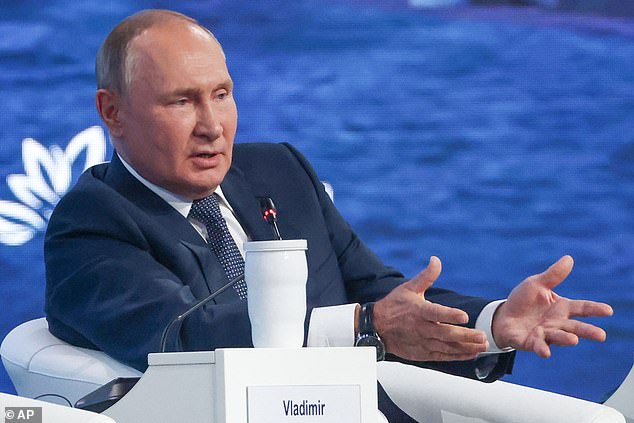 If Putin does stop oil and gas supplies from reaching Europe completely, this would have devastating consequences for ordinary people as it would increase already eye-watering energy prices.

Pointing to rising energy prices in Europe ahead of winter, Putin insisted Russia would supply nothing outside of existing contracts, quoting a Russian fairy tale: ‘Freeze, freeze, the wolf tail’.

‘They have several solutions. Either subsidising high prices, which is bad because it won’t change consumer behaviour… or reduce consumption,’ he said.

‘From an economic point of view, it is correct. From a social point of view it is dangerous, it can lead to an explosion. It is better to adhere to contractual obligations, to civilised rules,’ Putin said.

He added: ‘The demand is so high on global markets that we won’t have any problem selling it.’

‘An attempt to limit prices by administrative means is just ravings, it’s sheer nonsense,’ Putin added. ‘It will only lead to a hike in prices.’

He rejected the EU’s argument that Russia was using energy as a weapon by suspending gas supplies via the Nord Stream 1 gas pipeline to Germany. 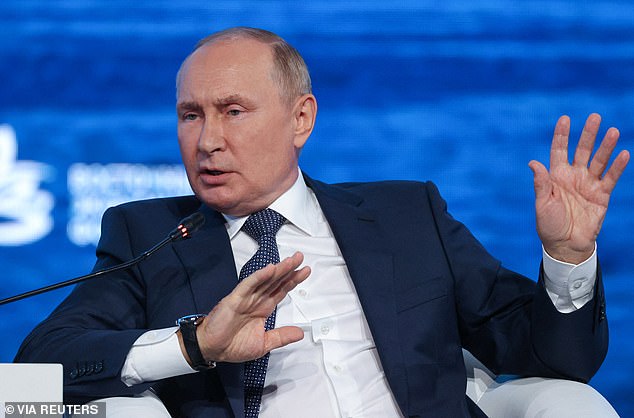 Putin told at an annual economic forum in the far-eastern port city of Vladivostok that European calls for a price cap on Russian gas were ‘stupid’, and would lead to higher global prices and economic problems in Europe 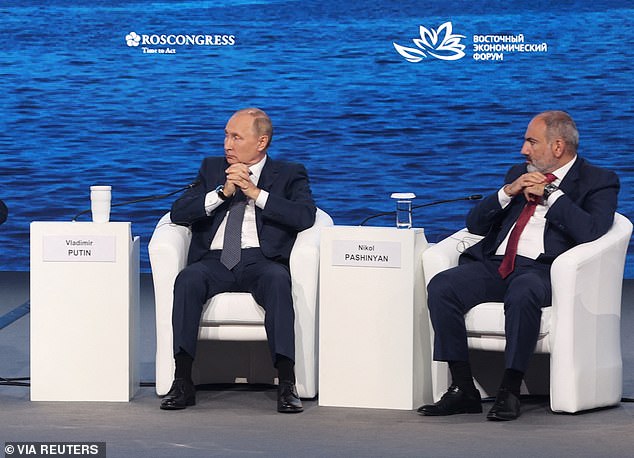 The Russian leader, 69, (left with Armenian Prime Minister Nikol Pashinyan) warned the leaders that Russia would walk away from its supply contracts if the West imposed price caps on the country’s exports, adding that Moscow will have enough customers in Asia

Putin said Germany and Western countries themselves were to blame for the Nord Stream 1 pipeline not being operational and that Ukraine and Poland decided on their own to switch off other gas routes into Europe.

Europe is facing a winter fuel crisis and surging energy bills after Gazprom fully suspended gas supplied through Nord Stream 1, after it said it found an engine oil leak during maintenance work.

Gazprom started cutting supplies through the Nord Stream 1 pipeline in mid-June and Russia has reduced gas deliveries to several European countries which have sided with Ukraine in the war.

‘Nord Steam 1 is practically closed now,’ Putin said as he called Germany to return a turbine for the pipeline’s Portovaya compressor station that would allow Russia to resume pumping gas.

‘There is an oil leak there – it’s a possibly explosive situation, a fire hazard. The turbine cannot work. Give us a turbine and we will turn on Nord Stream 1 tomorrow. But they don’t give us anything,’ he said.

But Putin said Moscow was ready to turn back on the crucial Nord Stream 1 gas pipeline to Germany as soon as a key turbine was returned to Russia from repairs.

This is a breaking news story, more to follow…