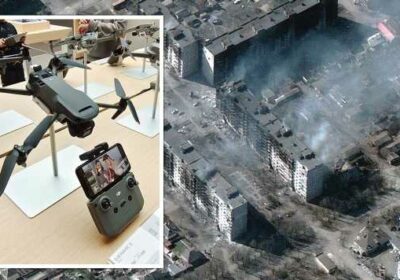 DJI is the world’s largest consumer drone maker. Both Ukraine and Russia purchase drones from them, although Ukraine has expressed suspicions that China has been aiding Russia’s use of them behind the scenes. Ukraine has also warned the drone’s tracking technology could be used to locate soldiers operating the aircraft.

DJI have announced that they will be temporarily suspending “business operations in the affected territories”.

Ukrainian officials have raised concerns that DJI’s AeroScope system was disproportionately creating problems for their side of the conflict.

They pointed out these issues began at the start of the war, causing suspicion that the Chinese firm had manually intervened in the online system to support Russia.

In an open letter last month he urged DJI to stop doing business in Russia.

He went on to claim that Russia had used DJI technology to kill Ukrainian civilians, including children, describing the firm as “a partner in these murders”.

He also alleged that Russia had access to an “extended” version of AeroScope, which he claimed its army acquired from Syria.

It was launched in the late 2010s so law enforcement agencies could track drones, following fears criminals were using them to spy on potential targets.

When Russia appealed to China for military support at the start of the war, drones were one of the most requested pieces of kit, according to CNN.

DJI has specified its products were not designed for military use, despite them having been seen used by both sides during the war.

In contrast to the many Western firms which have pulled out of Russia to protest its invasion of Ukraine, Chinese companies have stayed there.

This echoes Beijing’s stance of refraining from criticism of Moscow over the conflict.

“DJI abhors any use of our drones to cause harm, and we are temporarily suspending sales in these countries in order to help ensure no-one uses our drones in combat.”

Despite the Ukrainian plea to halt not just the sale, but post-sale support of the drones in the war, the drones and accompanying AeroScope can still be operated in Ukraine.

DJI spokesman Barbara Stelzner confirmed: “We do not have the ability to disable any of our products, because they can be operated without being connected to the internet.”

Through geofencing technology, drones can be prevented from flying in certain areas – but hackers have published technical ways of fighting these restrictions.