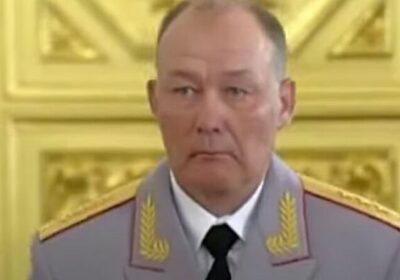 Vladimir Putin is believed to have called in General Alexander Dvorknikov to lead Russian forces as they seek to strengthen their position in eastern Ukraine. Dvorknikov built up a reputation of intense “brutality” during his stint in Syria, where he earned himself the nickname of “Butcher of Syria” for repeated attacks on the local population. While recently appointed, the Russian general is believed to have already made his mark in the Ukrainian invasion by allegedly masterminding a missile attack on the train station of Kramatorsk which left 52 people dead.

“Dvornikov is known for his brutality when he led Russia’s intervention in Syria.”

US National Security Adviser Jake Sullivan said more attacks on Ukrainian civilians can now be expected with Dvornikov in charge in a bid for Russia to secure some of its initial objectives.

Mr Sullivan said: “No appointment of any general can erase the fact that Russia has already faced a strategic failure in Ukraine.

“They thought they were going to be able to conquer the capital city and take other major cities with little resistance, that they’d, in fact, be welcomed with open arms.”

He continued: “What we’ve learned in the first few weeks of this war is that Ukraine will never be subjugated to Russia.

“It doesn’t matter which general President Putin tries to appoint. This particular general has a resume that includes brutality against civilians in other theatres in Syria and we can expect more of the same in this theatre.

“But it’s not something we need to anticipate looking forward, we’ve already seen it and we can expect more of it.”

Russian politician asks radio host ‘why are you laughing?’

Mr Sullivan added: “This General will just be another author of crimes and brutality against Ukrainian civilians and the United States is determined all that we can to support Ukrainians as they resist him and as they resist the forces that he commands.”

Dvornikov is the latest Russian general to be deployed to the Ukrainian front after colleagues earlier failed to make any significant advances towards Kyiv.

Strenuous civilian and military resistance from Ukraine forced the Russian Army to retreat from the north and move towards the areas of Donbas, Luhansk, and Donetsk, where Moscow can count on at least some civilian support.

Moscow has failed to take any major cities since invading on February 24 but Kyiv officials now claim Russia is gathering its forces in the east for a major assault and has urged people to flee.

Britain’s defence ministry estimated Putin is seeking to establish a land corridor from Crimea, which it annexed in 2014, and the eastern Donbas region, which is partly held by Moscow-backed separatists.

In its latest intelligence briefing, the MoD said Russian armed forces are also looking to strengthen troop numbers with personnel discharged from military service since 2012.

Satellite images released by private US firm Maxar dated April 8 showed armoured vehicles and trucks in a military convoy moving south toward Donbas through a town some 62 miles east of Kharkiv.