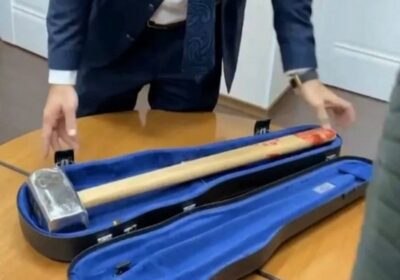 The European Parliament received a sinister warning from Vladimir Putin's crazed warlord after they were sent a bloodied sledgehammer.

It comes after the EU labelled Russia a "state sponsor" of terrorism on Wednesday ( November 23) following its actions towards Ukraine.

Wagner owner Yevgeny Prigozhin responded to the label by delivering them a violin case which carried the weapon tipped with fake blood.

The twisted message is said to be a warning after Russian citizen Yevgeny Nuzhin was killed with a sledgehammer earlier this month, reports The Sun.

The 55-year-old was believed to have defected to Ukraine however, he was allegedly kidnapped and sent back to the Wagner group in Russia.

Prigozhin is said to have told the press service Concord about his devastation about the terrorism link, according to Politico.

"Today I held a meeting of the commanders of the "Wagner" PMC and told them this sad news," he said.

"But before this procedure takes legal effect, I am entrusted to submit an information case to the European Parliament. If you have their contact, I suggest that we do it together – prepare and send it."

The moving of the violin case was recorded and given to a representative of the Pro-Kremlin Cyber Front Z telegram channel, who forwarded the video.

It remains unclear how EU lawmakers' will respond, but they are said to have heard requests from Ukrainian President Volodymyr Zelensky.

To stay up to date with all the latest news, make sure you sign up to one of our newsletters here .