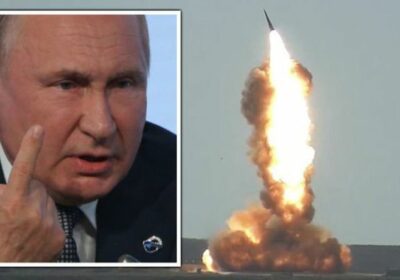 The new capabilities are designed to render GPS-guided missiles useless in the event of a confrontation. The announcement follows a test of the technology last week, which saw an old Soviet satellite destroyed, sending shrapnel towards the International Space Station.

It comes with growing tensions between Russia and Europe, as Putin has been accused of helping fuel a migrant crisis on the Belarus-Poland border, and stationing an ever-mounting number of troops on the border with Ukraine.

State-owned Russian Channel One TV claimed last night (Monday) the anti-satellite missiles could destroy as many as 32 NATO satellites.

In doing so, it would “blind all their missiles, planes and ships, not to mention the ground forces”.

The test last week – which provoked anger from NASA and Washington – was a warning shot to the West, state TV said according to the Mail.

“With its long and storied history in human spaceflight, it is unthinkable that Russia would endanger not only the American and international partner astronauts on the ISS, but also their own cosmonauts.”

Russian Channel One host Dmitry Kiselyov is quoted as telling viewers: “We shot down the old Soviet Tselina-D satellite in space orbit.”

He added: “It means that if NATO crosses our red line, it risks losing all 32 of its GPS satellites at once.

“This would blind all their missiles, planes and ships, not to mention the ground forces.”

“Russia needs guarantees of security, and in order to rule out the possibility of provocations capable of spilling over into a full-scale military confrontation, we will continue to clearly and consistently delineate our red lines, which n one is permitted to cross.”

The Nudol, called the “Star Warrior” by Russian newspaper Izvestia, was tested at least nine times between 2014 and 2020, according to the Centre for Analysis of Strategy and Technologies in Moscow.

However, the November 15 test was the first time it had been deployed to destroy a real satellite in orbit.

The shot across the bow for Western nations comes following the deployment of 94,000 Russian troops at the border with Ukraine.

An intelligence map released by Ukraine also lists Russia as having 1,200 tanks, 1,600 pieces of artillery, 330 aircraft, 75 warships and six submarines along the border.

The build-up has sparked fears of a full-scale invasion of Ukraine, following the Russian annexation of Crimea in 2014.

Following a meeting with the Ukrainian foreign minister on November 15, Jens Stoltenberg, NATO secretary general said that there had been a “large and unusual concentration of Russian forces close to Ukraine’s borders”.

He added: “Any further provocation or aggressive actions by Russia would be of serious concern.”

Kremlin spokesperson Dmitry Peskov said the deployment of troops was in response to Ukrainian aggression.

He told reporters: “The number of provocations has been growing, and those provocations have been conducted using the weapons that NATO countries sent to Ukraine.

“We are watching it with a grave concern.”

However, US officials dismissed this tactic as something Russia has attempted to use before, during the annexation of Crimea.

Last week, US Secretary of State Antony Blinken said: “Our concern is that Russia may make a serious mistake of attempting to rehash what it undertook back in 2014, when it amassed forces along the border, crossed into sovereign Ukrainian territory and did so claiming falsely that it was provoked.”