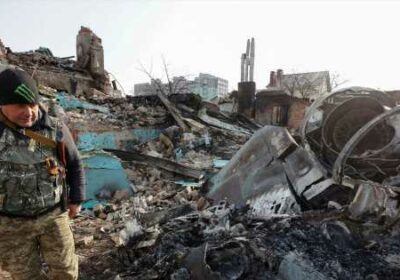 Vladimir Putin's bumbling Russian forces in Ukraine are now so lacking in technology on the front line that they have been found taping basic GPS devices to their fighter jets.

According to Defence Secretary Ben Wallace, the jets used by Russia have inbuilt navigations that are “too poor” to work properly in the field.

Speaking this week at the National Army Museum in London to commemorate those who died in World War II, he said that the blame for this should lie at the feet of the General Staff of the Russian army, General Valery Gerasimov

He said: “Russian vehicles had not been maintained properly and immobilised many logistics vehicles, leading to cheap tyres being blown out and truck axle hub failures, all due to poor maintenance or the money for that maintenance being taken elsewhere.

“As an aside, the sheer amount of footage from Ukrainian drones suggests to me that they also lack wider air defence and counter-UAV system.

“But it’s not just ground forces.

“GPS receivers have been found taped to the dashboards of downed Russian SU-34s so the pilots knew where they were, due to the poor quality of their own systems.”

“The result is that while Russia has large amounts of artillery and armour that they like parading, they are unable to leverage them for combined arms manoeuvre and just resort to mass indiscriminate barrages.”

“I know soldiers in the Russian army will not get a voice and there will be thousands of mothers and wives who do not agree with this illegal war, who will be asking themselves why these things happened.”

According to the latest stats – which can not be verified because of Russia's unwillingness to do so – Putin has lost 25,350 soldiers in battle, while 1,997 vehicles and fuel tanks have been destroyed.

On top of that, 1,187 tanks, and 199 aircraft have been destroyed, according to the Ukrainian Ministry of Defence.

Earlier this week, The Russian despot again tried to reassure his citizens that they were fighting against Nazis in his speech at Monday's (May 9) Victory Day parade in Moscow.

"You are fighting for the Motherland, for its future, so that no one forgets the lessons of World War Two. So that there is no place in the world for executioners, castigators and Nazis," Putin said.