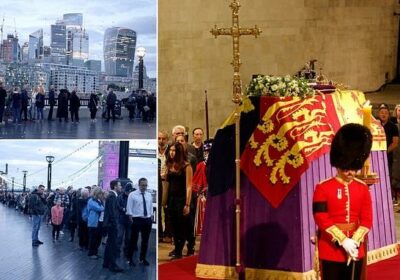 Here, follow today’s latest breaking news, updates and pictures from the royal family as the Queen’s lying in state enters its second day.

Protests against the monarchy are expected to take place outside Cardiff Castle when the new King Charles III visits Wales during his royal tour later today.

The Welsh First Minister has said that any protests will be a ‘footnote’ to the main proceedings, as the King and Queen Consort prepare to visit Wales.

Discussing planned protests during the visit, Mark Drakeford said: ‘People have a legitimate right to protest and there are a variety of views.’

He told BBC Radio 4’s Today programme: ‘People have that right and I think it will be exercised with restraint and it will be a footnote to the dominant feelings of the day.’

Mr Drakeford also stressed that he had confidence in the police to deal with protests in a ‘proportionate’ way, amid questions about the handling of demonstrators in other parts of the UK.

‘It should be proportionate. It should recognise the rights that people have. I have every confidence in the South Wales Police who have dealt with this sort of event many times very successfully.’

An official delegation from China has reportedly been banned from attending the Queen’s lying in state.

It comes amid a row over Chinese representation at the funeral of the late monarch, with concerns raised by some Conservative MPs over the extension of an invitation to the country.

Senior Tory MPs Tim Loughton and Sir Iain Duncan Smith this week wrote to the Commons Speaker and Lord Speaker, calling it ‘extraordinary’ that Chinese representatives should have received an invitation.

The group from Beijing has been refused permission by Commons authorities to attend the lying in state after an intervention by the Speaker, a senior parliamentary figure told news website Politico.

Sir Lindsay Hoyle reportedly told colleagues he declined a request for the delegation to be allowed access to Westminster Hall, where crowds continue to pay their respects to the Queen ahead of her funeral on Monday. 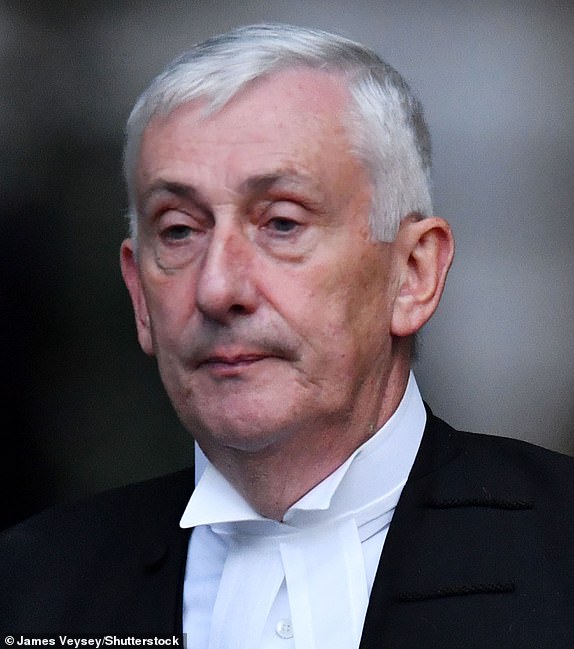 Princess of Wales takes girl, 8, to leave corgi tribute to the Queen

Kate Middleton melted hearts yesterday after walking alongside a young girl, 8, and helping her choose a spot to lay her tribute to the Queen.

The new Princess of Wales, 40, was yesterday at the late monarch’s Sandringham residence looking at the sea of tributes to the Queen and chatting to crowds with husband William.

She spotted and spoke to schoolgirl Elizabeth Sulkovska, eight, clutching a bouquet of flowers and a corgi teddy.

Footage shows the eight-year-old, who was in the crowd with school friends, speak to Kate.

A delighted Elizabeth was then chosen to walk up to the sea of tributes with Kate and place the corgi among them.

Three central London Tube stations will be closed for most of the morning on Monday – the day of the Queen’s funeral at Westminster Abbey – to avoid overcrowding, TfL has announced.

Passengers will be prevented from starting or ending journeys at Westminster, St James’s Park and Hyde Park Corner stations.

The transport body said it ‘will aim to reopen stations’ after the funeral to help people leaving the Westminster area.

Green Park station will be exit-only between 10am and 8pm.

Many buses in central London will be diverted due to road closures. TfL also announced that buses will pull over ‘if it is safe and practical to do so’ and switch their engines off during the one-minute silence on Sunday at 8pm and the two-minute silence at around 11.55am on Monday. 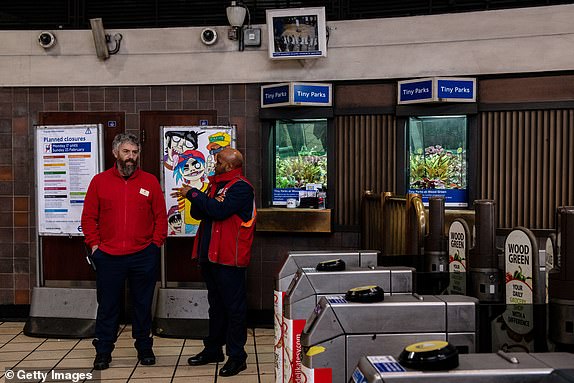 The queue to see the Queen lying in state has reached 4.9 miles this morning, with a minimum queueing time of 11.5 hours.

The line has reached Southwark Park, but mourners can find the exact location by using the what3words app with the code ‘spices.beats.influencing’. 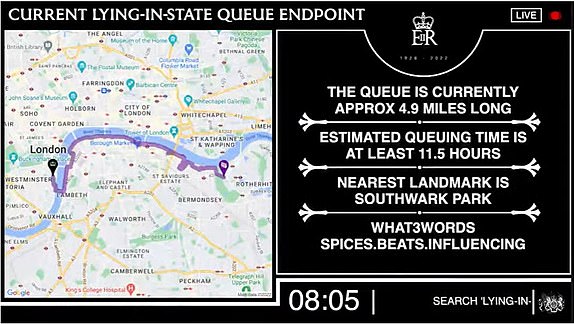 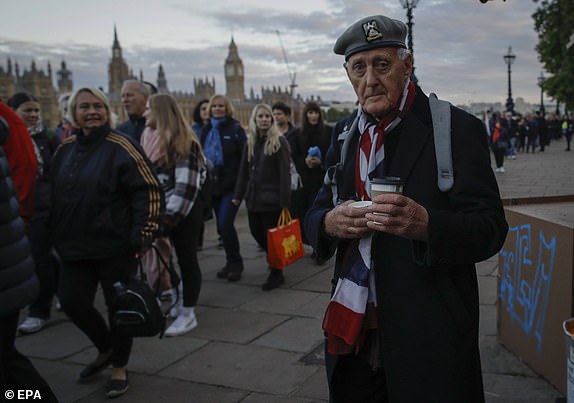 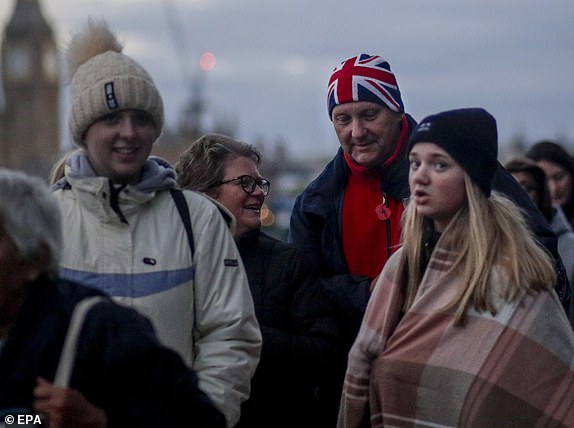 New Zealand’s PM Jacinda Ardern will have private audiences with King Charles III, Prince William of Wales and the UK’s new PM Liz Truss, it has been announced.

The meetings come as little surprise after new details of the funeral arrangements were announced yesterday, as New Zealand is a close ally of the UK.

Ms Ardern said she will likely discuss Ukraine and the UK’s free trade agreement with New Zealand when she meets Liz Truss, but that the focus would be on the Queen’s death.

‘I am sure we will also transact our relationship as well, but it is all within the context of the week of mourning that the UK is currently in,’ she said. 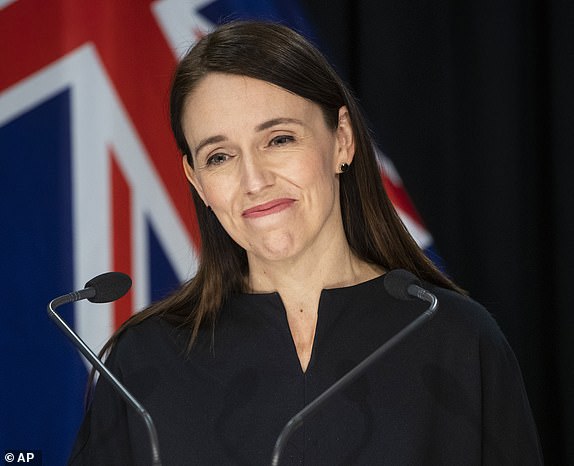 US President Joe Biden will ride in a famous armoured vehicle nicknamed ‘The Beast’ while visiting the UK to attend the Queen’s funeral.

The Cadillac has night vision cameras, tear gas cannons, and 8 inches of armor.

Its doors weigh as much as those on a Boeing 757 aircraft and its tires are pneumatic run-flats so the vehicle can still drive even if they are deflated. The president also can use a state-of-the-art communication system that is built into the Beast, which weighs about 20,000 pounds.

There is also a secure oxygen system and a supply of the president’s own blood in case of an emergency.

The vehicle was built to withstand chemical and biological attacks as well as bullets and explosions, with its chassis said to be effectively ‘indestructible.’

The vehicle was spotted being transported in preparation for its use in London yesterday.

About taking that bus..

The Beast & other vehicles for the Biden motorcade passing through north London just now pic.twitter.com/gB6DyYfzrW

Members of the public have described tiredness, aching feet and stiff limbs – as well as cold and hunger – but are determined to stay in the queue to the end.

Mary Buttimer, 59 from Greenwich, and Martin Clark, 65, from Kent, have become firm friends in the queue.

Standing near London Bridge station, London, the pair have been in the queue for an hour and a half.

Mary said she had joined the queue to pay her respects to the Queen. ‘I wouldn’t necessarily say I’m a royalist, but I just thought it was a respectful thing I could do, to acknowledge her years of service,’ she said.

Martin said they had started near Bermondsey station, and seemed ready for a long wait ahead. 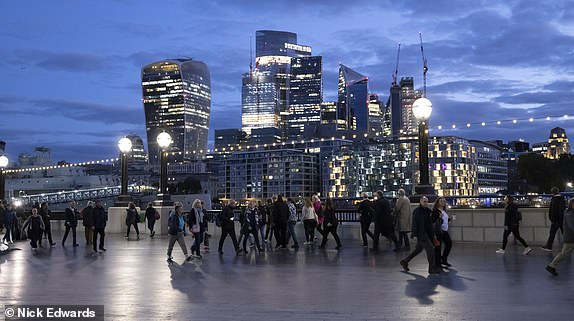 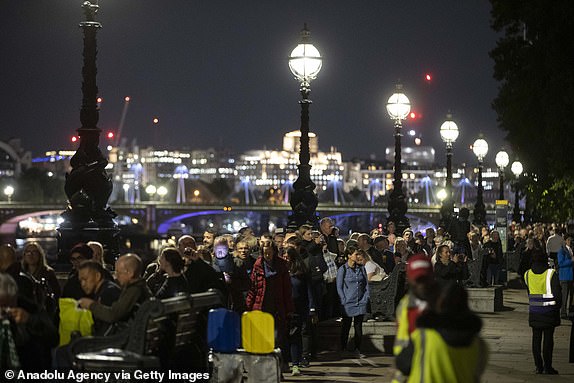 Last night the queue to pay final respects to Her Majesty reached five miles as mourners faced a wait of 14 hours overnight to get into Westminster Hall this morning.

Thousands are already watching the government’s live queue tracker this morning, a live stream which informs the public how long the queue is, how long they should expect to queue for and the exact location of the end of the queue.

Yesterday up to 12,000 people were watching the stream at any one time.

A brief look at the queue to see the Queen lying in state from overnight now. Although the length of the line diminished during the night to 3.6 miles, it has quickly jumped back up to almost 4.5 miles this morning.

Mourners faced a cold night and a fast moving queue as they waited to see the late monarch.

Princes William and Harry will walk together in the procession of the Queen’s funeral on Monday it has been revealed.

At Monday’s funeral, the Duke of Sussex will be flanked by his older brother, the newly titled Prince of Wales, and Mr Phillips, as the coffin makes the short journey – led by Navy troops pulling a gun carriage.

The three eldest grandchildren of the Queen will walk behind King Charles, Princess Anne, Prince Andrew and Prince Edward, who will lead the procession of senior royals behind the late monarch’s coffin.

Behind the grandchildren will be the late monarch’s son-in-law Vice Admiral Sir Timothy Laurence, the Queen’s cousin the Duke of Gloucester, and her nephew the Earl of Snowdon.

It comes as it was earlier revealed how the Queen’s state funeral will end with a two-minute national silence in a ‘fitting tribute to an extraordinary reign’ before she is laid to rest beside her late husband.

Friday marks just over a week since the Queen passed away last Thursday afternoon. There is a busy day once again for the new King Charles and the rest of the royal family – but what exactly is happening today?

King Charles and the Queen Consort will travel to Wales by helicopter where they will attend a service of prayer and reflection at Llandaff Cathedral.

The couple will then go to the Welsh Parliament where they will receive condolences and meet members of the Senedd.

From there they will travel to Cardiff Castle where Charles will hold a private audience with Welsh First Minister Mark Drakeford and the presiding officer, before attending a reception hosted by the Welsh Government. A protest against the monarchy is expected to take place outside the castle.

On his return to Buckingham Palace, the King will host faith leaders in the Bow Room.

The Prince and Princess of Wales will visit Army Training Centre Pirbright in Surrey to meet troops from the Commonwealth who have been deployed to the UK to take part in the state funeral of Her Majesty The Queen.

The lying in state continues. From 7.30pm, the Vigil of the Princes takes place at Westminster Hall, carried out by Queen’s four children (The King, Princess Royal, Duke of York and Earl of Wessex).

By 7am this morning the queue for mourners to say goodbye to the late Queen Elizabeth II had reached 4.4 miles, with the government warning this meant a wait of at least 11 hours.

Members of the public have been filing past Her Majesty’s coffin all night, and will continue to do so until Sunday. 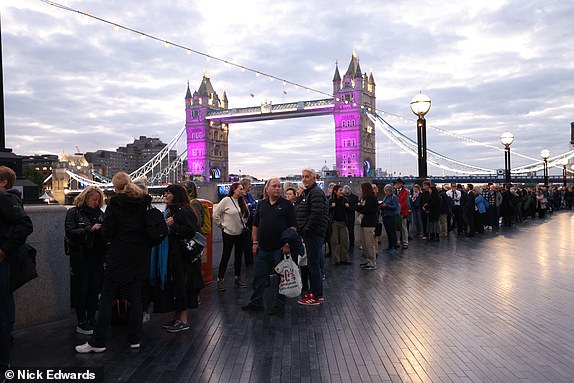 Good morning and welcome to our live coverage today as King Charles III heads to Wales and thousands queue to pay their respects to the Queen as she lies in state at Westminster Hall.

We will bring you all the latest news, photos and videos throughout the day, as well as updates on the length and location of the queue to see the Queen’s coffin.