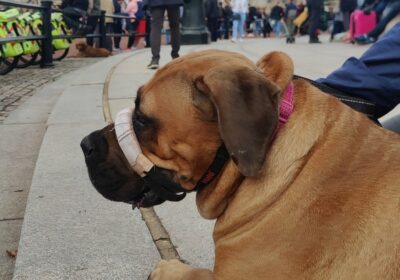 Of the thousands of people who travelled to Buckingham Palace the morning after the Queen died, dozens brought their dogs for company.

Following Thursday evening's sad announcement of Her Majesty's death at Balmoral Castle, paying respects to her became a priority for Brits and tourists alike.

It was an eerily sombre atmosphere outside the Palace before excitement ramped up for King Charles III's arrival, but bringing smiles to grieving faces were dogs on leads in staggering numbers.

As the Queen's love for corgis was known worldwide, I was keen to speak to the mourners who brought their own four-legged friends in to.

Rachael Smith, from Marylebone, London, shed a tear and overcame a lump in her throat when revealing the impact Elizabeth II had on her life and the world.

She told the Daily Star: "It feels as if when the Duke of Edinburgh died part of her died with him and she became, she was always the most treasured granny.

"She's always been our Queen and I remember the first time I actually saw her in person I was 10 and I waited all morning in the rain and I was so excited to see her."

Former British Embassy media officer, Rachael recalled her meeting with the Queen 20 years ago in France.

Rachael said: "She was amazing, I mean she thanked us all for our work and she had such a twinkle in her eye and a sense of humour and these bright blue cornflower eyes.

"I think the most amazing thing is, she was born into a family that was 1200 years old and yet there was something that was so humble about her."

Speaking about her miniature schnauzer Diego and giant schnauzer Xander, Rachael added: "Diego is just wanting to check the other dogs but Xander definitely notices the mood.

"You know he's not sure what was going on but even the other dogs, given how many dogs there are here, they're not really bothered about each other.

The biggest dogs I have seen in a long time were marched through the crowds by Christian and his family, whose English bull mastiffs appeared to match the day's mood.

Christian from Battersea, London, said: "It's quite solemn I was keen to come here and take it in. What really strikes me is the range of diversity here. Obviously there are always tourists and whatever but the amount of people here and those who have brought their dogs.

Point to one dog before another, Christian added: "She's not been in a crowd before, this is her first time. I'm not sure entirely how the mood has affect Robo as he's quite calm anyway."

Sarah, 43, Oxted, Surrey brought her spaniel to the Palace. She said: "I wanted to come up and see the buzz and what's going on. It's very sombre, you see a lot of emotional people going round. It's going to be an emotional few days."

As I began to head off from the Palace and walk through Green Park, I spotted the most eye-catching poodle bouncing around off the lead.

His owner Wendy, from Islington told me how she felt an unexplainable pull to pay her respects at Buckingham Palace on Friday morning and give her handsome pooch a run out at the same time.

She said: "I wanted to come and feel the atmosphere, reflect, It's nice and calm everybody just wants to come and see. I don't know why really to be honest, she's been around for a long time. Some people probably don't know why they want to come but obviously people want to flock here.

"If I'd have seen that it was really manic then I would have diverted because of him but he's fine because it's very calm."