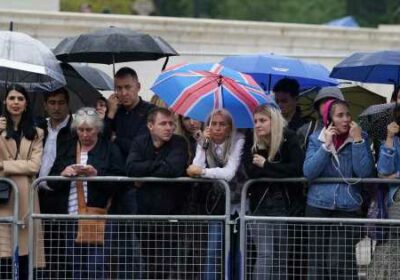 The Queen's funeral procession could coincide with light showers, with King Charles and other members of the Royal Family potentially getting caught in the midst of it.

While the crowds who gather in London and Windsor for the funeral are unlikely to come across heavy showers, according to the Met Office, there is a possibility light showers could occur before the committal service begins at 4pm.

While there is a slight chance of showers after 1pm, the morning of the funeral is expected to be free of any showers, WalesOnline reports.

READ MORE:Mum mocked after asking if she can hang out black clothing during Queen's funeral

Meteorologist Alex Burkill told the PA news agency: “There is a small chance of the odd shower through the afternoon, most likely around 3pm or 4pm.”

He added that any showers that could occur “are going to be so sporadic that it would be quite unlikely that it actually hits where events are going on, but there is just a small chance”.

“They’re also going to be very light, so at most really we’d be talking one millimetre.”

Mr Burkill urged those staying overnight for the funeral or the lying in state before it concludes at 6.30am today (September 19) to be “wrapped up” for the anticipated chilly conditions.

He said: “I’m not expecting it to be as chilly a night as what we’ve had recently. This morning, temperatures even in London were around 6C.

"Whereas tomorrow morning, because there’s more cloud around, temperatures generally will be around 10C or 11C.

"Windsor will probably be a bit chillier at maybe 9C or 10C, but it should be a few degrees milder than last night.

"It’s still going to be chilly, you’ll want to be wrapped up, but it’s not going to be quite as cold as the nights that we’ve had recently.”

'You can leave your tributes to Queen Elizabeth II here.'