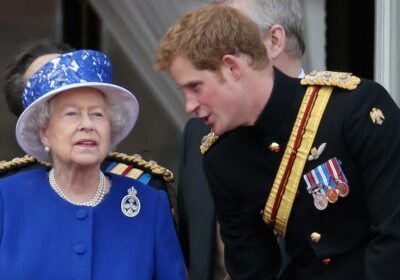 The Queen's famous sense of humour has been celebrated since the news of her death on Thursday September 8 broke to a shocked nation.

And her grandson Harry will testify for it, having recorded the 96-year-old a hilarious voicemail message when she got a first mobile phone.

The UK's longest-serving monarch reportedly asked the young tech-savvy prince to come up with a voicemail message for her in the case that she couldn't make it to the phone.

And Harry delivered. “Hey, wassup? This is Liz," he said on his grandmother's behalf.

"Sorry I’m away from the throne. Press one for Philip, two for Charles and three for the corgis!”

Royal author Phil Dampier wrote in The Express that the Queen's private secretary "got the shock of his life" when he heard it.

However, the good-humoured Queen "just laughed".

After her death, Harry praised her as his "guiding compass".

Mr Dampier said the statement was "undoubtedly heartfelt, well thought out and sincere" but questioned whether Harry regrets how the past couple of years since he and Meghan Markle left the Royal Family have played out.

He said: "I do not have any doubt that he loved her deeply. But surely he must have realised the pain she suffered as she saw him leave the bosom of the royal family and then fire potshots at the monarchy from their new home in California.

"Knowing that she was 96 and increasingly frail it seems incredible that the couple had no plans to visit her at Balmoral during what was due to be a brief visit to Europe.

"Now it is too late. It was only by chance that the Sussexes were in the country when she died but now they will undoubtedly stay on for the funeral."