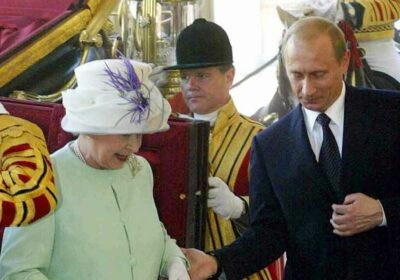 The Queen was known for her quick wit and sense of humour and this was on display during a memorable state visit from Russian despot Vladimir Putin.

Her Majesty, who died yesterday (Thursday, September 8) at the age of 96, was never afraid to express it in the company of world leaders.

One of those, as recalled by former Home Secretary David Blunkett, was Russian despot Putin.

READ MORE: King Charles III has '90 days to save monarchy' as the Firm enters 'dangerous' period

Long before he had ordered his troops to invade Ukraine, the Russian President took a trip to the United Kingdom for a state visit.

It was during that visit, in 2003, that he came up against a formidable foe – Mr Blunkett's guide dog.

And the incident sparked a moment of hilarity from the deceased monarch.

The former Labour MP, who is blind, told the BBC: “The only time I met Vladimir Putin was back in 2003 on an official visit and my then dog barked very loudly.

“I did apologise to the Queen who was obviously hosting.

“I don’t think I am giving anything away when I said, ‘Sorry your Majesty about the dog barking.’

“She said, ‘Dogs have interesting instincts, don’t they?'”

It comes after it was announced Putin has decided to snub the Queen's funeral.

Despite the chances of him being invited being very slim, Putin's spokesman has confirmed that he won't be attending after the monarch passed away.

Dmitry Peskov said: “This option is not being considered.”

According to several Russian news outlets, he added: “Well, it has not yet been announced what the protocol practice will be, whether it will even provide for the participation of someone in the funeral, this should all be announced somehow by the royal court, the British authorities, until there have been such announcements.”

Despite the apparent snub of the funeral before an official invite has been made – or not, in his case – Putin did actually reach out to the Royal Family via official Kremlin channels to offer condolences just hours after her death was announced.

The pair met many times over the years, but Putin is now effectively barred from entering the UK after his troops invaded Ukraine.