RACHEL JOHNSON: Sorry chaps, but we want world peace – not a fake bromance

The two Korean leaders clasped hands, then faced each other, so close I could almost smell the pickled cabbage on their breath.

The historic man-date on the fortified border, the hugs, the birdsong, the pledges – it was all designed to convey the two countries’ amazing re-connection. After 65 years, two were becoming one.

Peace on the peninsular in our time would be nice, of course. But, despite Trump’s predictive tweet KOREAN WAR TO END!, I want to see it in triplicate. All of it.

The rule of thumb for most things is ‘deeds not words’. Now it appears that the lingua franca of diplomacy is… body language. 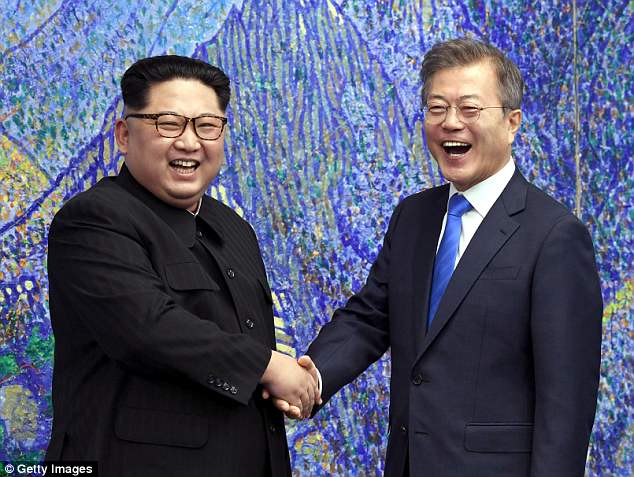 ‘Their greeting rituals were tailored for the world stage to send strong intentional messages,’ one body language expert said, ‘and performed so everyone could understand what they were trying to say.’ Okaaaay.

The traditional Korean greeting, however, is the bow, followed by the formal and all-important exchange of business cards.

According to a guide to protocol I’ve consulted in my anxiety, ‘Koreans consider it a personal violation to be touched by someone who is not a relative or close friend. Avoid touching, patting or back slapping a Korean.’

These lingering embraces, these literally ‘touching’ scenes, are the new Esperanto of international relations, ie designed to be comprehensible to audiences across the globe.

But something about these choreographed charades – both in Korea and the US last week – makes me break out in a cold sweat.

Caught in a tidal wave of ‘whitewash’ insanity

A white actress, Sierra Boggess, has had to pull out of West Side Story after a row over the ‘whitewashing’ of the female lead.

She’s had to apologise after being cast as Maria, who is Puerto Rican in the original, even though a white actress, Natalie Wood, played her in the 1961 film version. Is the world going mad?

I’ve just seen Sir Nicholas Hytner’s Julius Caesar. Casca, a bearded Roman tribune and one of the assassins, is played by a black woman (in fact many male parts are taken by women). Fair’s fair – gender and colour-blind casting must cut both ways, darlings. 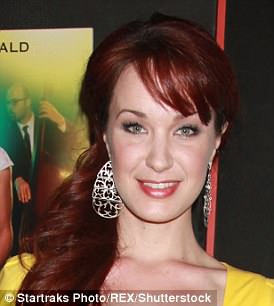 Sierra Boggess (pictured), has had to pull out of West Side Story after a row over the ‘whitewashing’ of the female lead

I also liked it when silverfox Eurocrat Michel Barnier kissed Theresa May’s hand the other day.

Man-hugs and back-slapping bro-outs at summits are also fine. Prolonged handholding – now almost compulsory – is too intimate and exhibitionist at once. It is for lovers. It is NSFS (not suitable for statecraft).

I can’t stop worrying how long they are going to pump away while gazing into each other’s eyes.

Does one of them have to say, gently, to the other, ‘OK, I’m unclasping… now’ before he disengages?

These touches are supposed to convey sincerity, but they’re fake.

They make me think of Trump’s hand-grab of Mrs May in the White House.

We thought he was showing us the depth of our special relationship, but it turned out to be only further evidence of his indiscrimination.

He moved on to someone younger, hotter, fresher.

Yes, he’s over here in the summer, but he didn’t love her tomorrow, did he?

It was his ‘perfect’ petit ami Emmanuel Macron that Donald couldn’t keep his hands off last week.

Melania wouldn’t let her husband near her (not after Stormy Daniels, and his revelation he was too busy to buy her a 48th birthday pressie), so he only had eyes for the dinky French President, whom he treated with careless possession, at one point dragging him around the White House like Christopher Robin with Winnie the Pooh.

Snap! Was it careful co-ordination, or coincidence, when both First Ladies wore white? I think the latter. Persil white is an unforgiving shade – and blotting paper for spills and make-up. Still, Brigitte and Melania looked a million dollars, but their ‘looks’ did invite the comparisons that are inevitable when one famous woman appears in public alongside another. So here’s the fashion part: Madame Macron’s zippy two-piece was ‘ooh, matron’ while the FLOTUS’ tighty-whitey number was very ‘sexy nurse’ indeed. Va va voom!

Contrast the constructed body language of the politicians, I suggest, with that of the Cambridges as they emerged from the Lindo Wing on St George’s Day to show the world their gorgeous newborn son, Prince Louis Arthur Charles.

The only physical contact between the couple was this.

At one point, Prince William placed a guiding hand on his wife’s lower back, and this one simple gesture was far more real and natural than the entire staged Korean showmance (until they actually sign the peace treaty proper, anyhow) or the cringey bromance between Trump and Macron.

So, polite notice to world leaders: enough of the gesture politics.

For all our sakes, keep your eyes on the driving and your hands on the wheel – and not on each other.

Very surprised to read that the average person has 17,000 living relations. My own family seem to be ubiquitous, as very many people complain to me all the time. My response to this shock finding is therefore: 17,000 rellies – can that really be all?

Terrible confession. I cannot get excited by the fact that Abba are returning after 35 years with two new songs. I’m afraid that I’ve become hooked on the Mamma Mia! soundtrack – yes, the one with Pierce Brosnan croaking – and now can’t listen to Abba at all.