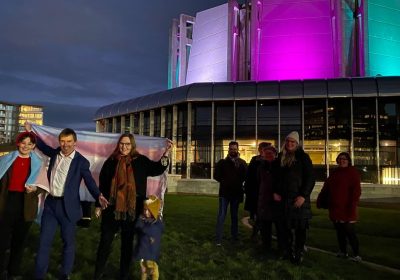 A rally for transgender rights will go ahead outside the Michael Fowler Centre in Wellington tonight while controversial group Speak Up For Women holds an event there.

It follows Lower Hutt’s mayor apologising after saying the group could hold one of their events in the bin, a billboard being removed, and the city council’s decision to light up the Michael Fowler Centre in the colours of the transgender flag.

Speak Up For Women opposes proposed amendments in a Bill enabling people to self-identify their sex on their birth certificate without going to the Family Court.

The group has been called anti-trans and transphobic, something which they reject.

Recently the High Court ruled one of the group’s events should be allowed to go ahead at Palmerston North City Library, after the council cancelled the booking.

The judge said the group “cannot rationally be described as a hate group”.

Dunedin and Christchurch city councils have previously refused to allow the group to hold meetings in public facilities, but following the court decision a meeting at Auckland’s Town Hall went ahead as planned.

Speak Up For Women is holding an event in the Lion Harbourview Lounge at the Michael Fowler Centre in Wellington from 6pm.

A group called Queer Endurance / Defiance has decided to hold a rally outside the building at the same time to show that Wellington stands with the transgender community.

A Facebook event for the rally said it will be a positive demonstration of pride and solidarity.

The demonstration will be peaceful and will not disrupt access to the Speak Up For Women event, the event listing said.

Group spokesperson Elle Aingsbury said they wanted to be a positive voice for transgender rights.

She said they will be gathering well away from the doors to the building.

“We will have some of us in hi-vis jackets keeping a path clear to the doors … our plan is not to interact with people who are entering the meeting.”

Speak Up For Women spokeswoman Beth Johnson said they respected the right to protest peacefully.

But Johnson said the intention to gather near the entrance of the Michael Fowler Centre will be intimidating for those attending the event, who will have to walk past protesters to get in.

Wellington Mayor Andy Foster and councillors Fleur Fitzsimons and Teri O’Neill have organised for the sails of the Michael Fowler Centre to be lit in the colours of the transgender flag while the event takes place.

“The conversation which is being had around the country has caused angst for the trans community in particular,” Foster said.

“This is a vulnerable part of our community so we are trying to say to them that we’re standing beside them and we support them.”