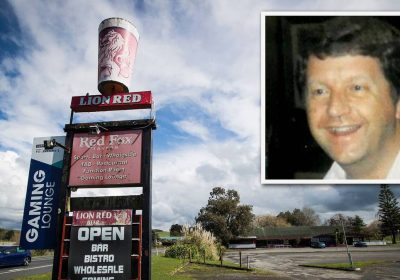 One of the bar staff present during the fatal Red Fox Tavern robbery has recalled an explosion and hoping against hope the slain publican was okay more than 30 years after the events transpired.

Mark Joseph Hoggart, 60, and a man with name suppression are on trial for the aggravated robbery and murder of its publican, Christopher Bush, on the night of October 24, 1987.

Bush had been was having a drink with three staff members, Sherryn Soppet, Stephanie Prisk and William Wilson, when the fatal armed hold-up occurred.

Prisk told the High Court at Auckland today that she had been working at the tavern part-time some evenings to help support her family.

She recalled how Wilson picked her up that day and they parked around the back because the front car park was full.

After the patrons had left that night, the colleagues began drinking together.

“That [back] door that was unlocked burst opened and two people came in and said ‘This is an armed robbery’,” Prisk said.

“One had a gun and one had a baseball bat.

“Then something happened. I am not sure what.”

There was an “explosion”, she said.

“Then Chris fell on the floor and the gunman was screaming obscenities and yelling.”

“How did you feel?” lead Crown prosecutor Natalie Walker asked.

Bush’s three staff members were told to lie on the floor while the intruders demanded the keys to access a safe.

Soppet did not have her glasses and Wilson was in total shock, Prisk said.

“He just couldn’t move,” she said.

“There was only one alternative and that was me.”

She crawled along the floor and searched for the keys in Bush’s pockets.

Throughout the ordeal they were told they were covered with a gun and “one wrong move and you are next”, the court heard.

Prisk managed to find the keys and she held them up.

The intruders demanded that she now open the safe but Prisk had never seen the keys before and did not know which one was the correct one to use.

She pleaded that she had three little children at home, the court heard.

The man with the bat ended up breaking down the door to Bush’s office.

Prisk was taken back to the others, she was held by her ankles and dragged face down backwards towards the leaner to be tied up as well.

It was with yellow twine, she said

“I remember that distinctly.”

The group were told not to move for eight minutes otherwise the offenders would hear over a radio.

She described herself as likely numb at this point.

“I remember saying to Sherryn we can’t move until we hear a car leave and we waited and there was no car. There was no noise. We never heard a car.”

After waiting for a time, she realised they needed to get help.

She had been holding out “hope against hope” Bush was okay.

The gunman seemed to have yelled something to the effect of: “This is an armed hold-up.”

Bush was holding his beer handle and hurled it towards the gunman, the prosecutor said.

At the same time, the gunman – standing only 3 to 5 metres away – pulled the trigger.

“He [Bush] seemed to have just enough time to lift his left arm to shield his face but this was no protection.”

Bush was struck full-on in the upper left side of his chest and under his arm.

“He stood no chance.”

The Crown case is that the two accused men are consistent with the descriptions of the offenders and they had the motive – they were broke and needed money.

Fletcher also said claims about their whereabouts that night could not be corroborated.

Wellington defence lawyer Christopher Stevenson, representing the other defendant, also said the wrong people had been put on trial.