Germany’s supreme court is set to rule on whether to make age checks mandatory for migrants arriving in the country claiming to be minors.

The proposal has been criticized by the German Medical Association, which has branded the tests unethical and ‘an invasion of personal well-being’.

It comes after a series of reports from German cities that one third to around half of unaccompanied child migrants who underwent tests, were in fact adults. 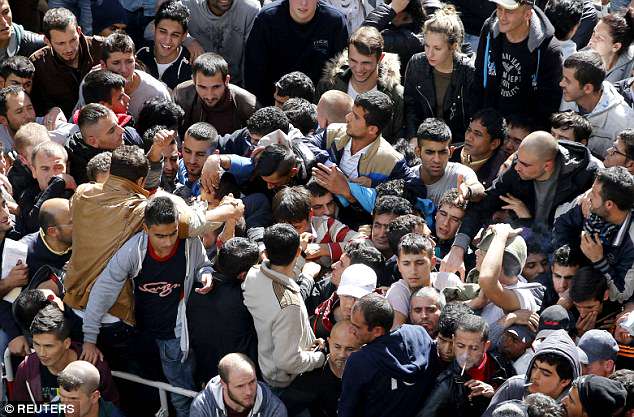 Influx: Migrants and refugees are seen queuing outside the Berlin Office of Health and Social Affairs as they wait for their registration in September 2015

Last year, 49 per cent of refugees and migrants who arrived in the city of Hamburg without any family members claiming to be underage were adults, as reported by Die Welt.

In the state of Saarland, where checks are carried out on all unaccompanied child refugees under a local policy, roughly 35 per cent were adults, DW.com reports.

In 2016 alone, 35,939 of these were unaccompanied minors, according to the Federal Office for Migration and Refugees (BAMF).

At the moment, the age of a minor who arrives in Germany without identification is determined through an interview with a social worker and a ‘visual inspection’. 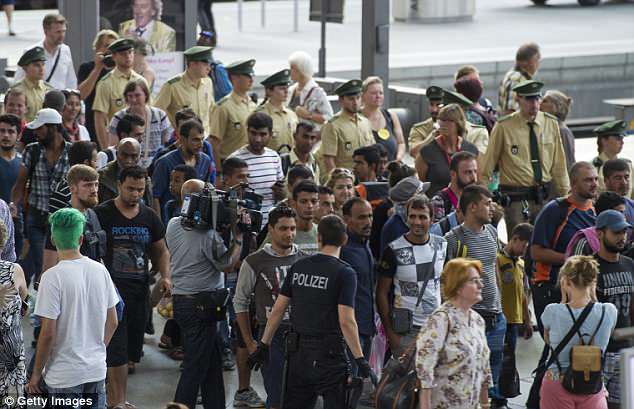 Migrant crisis: Police are seen detaining a group of migrants arriving at Munich’s main rail station from Hungary without passports or valid visas in 2015

If there is any doubt, a medical test can be ordered, but this is not mandatory.

This could change following today’s ruling by the Federal Administrative Court, one of the Germany’s five supreme courts.

There are several medical tests that can help determine a person’s age, such as x-rays of bones and teeth.

However, these tests have a significant error margin of several years, which could become an issue for migrants in their late teens.

The proposal comes in the wake of a number of well-published crimes involving migrants or refugees claiming to be under-age where a medical test has determined the perpetrator to be an adult.

Last month, Afghan asylum seeker Hussein Khavari was jailed for the rape and murder of medical student Maria Ladenburger, 19, in October 2016 in the university town of Freiburg.

At the time of the murder, Khavari claimed to be 17, but testing on his teeth showed him to be between 22 and 29 years old. His own father later claimed he is 34.