Home » World News » Relocating civil servants to outside London could cost £40,000 EACH

Relocating civil servants to outside London could cost £40,000 EACH Rishi Sunak’s plans to relocate civil servants to the North of England will cost £40,000 for EACH official and have little ’levelling up’ effect, warns think tank

Government plans to move thousands of civil service jobs out of London could cost up to £40,000 per official asked to relocate and may not significantly improve economic inequality, a think tank has warned.

Chancellor Rishi Sunak announced at the Budget in March this year that the Government’s ‘ultimate ambition is to move 22,000 civil servants’ out of the capital.

The push is part of Boris Johnson’s wider plans to ‘level up’ the whole of the United Kingdom by boosting prosperity outside of the south east of England.

But the Institute for Government said moving civil servants to other towns and cities ‘will come at significant cost and with disruption’ and it ‘will not be a panacea for overcoming economic inequality between regions’.

The think tank said moving Whitehall staff out of London would save money in the long term.

But the upfront costs of relocating, redundancies, recruitment and training means the bill for every employee moved out of London could be as much as £40,000. 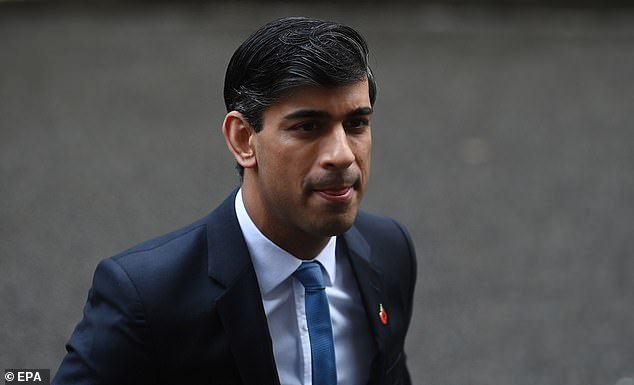 Chancellor Rishi Sunak, pictured in Downing Street this morning, announced at the Budget in March this year that the Government wants to move 22,000 civil servants out of London by the end of the decade

The Government wants to fulfil its pledge to move 22,000 civil service jobs out of London by the end of the decade.

Just over one in ten of the UK population live in the capital but it is home to approximately two thirds of policy makers.

Ministers believe moving jobs away from Whitehall will help contribute to Mr Johnson’s ‘levelling up’ agenda and help the civil service better reflect the UK population.

Increased remote working during the coronavirus crisis has been cited as evidence that many civil servants do not need to be in the capital in order to be effective.

But the Institute for Government said in a new report that the Government ‘will struggle to meet all of its aims and maintain the quality of its work’.

‘Those aims it does meet will come at significant cost and with disruption,’ it said.

‘The Government must therefore be realistic about what relocations can achieve. Shifting 22,000 jobs around the country could bring localised benefits to the selected areas, but it will not be a panacea for overcoming economic inequality between regions – if that is what the Government means by “levelling up”.’

The think tank said moving jobs away from London would save money in the form of cheaper office space but there would be a ‘trade-off’ with the high upfront costs of relocation.

The report said: ‘Even before regional pay differentials are considered, the Government estimates that accommodating a civil servant in London costs more than three times as much as accommodating a regional counterpart.

‘However, there can be a trade-off between cheaper rent on the one hand, and costs associated with the move on the other, including redundancies, relocation payments, travel to London, and recruitment and training for new staff.

‘In particular, the high upfront costs of relocation – estimated in 2010 at up to £40,000 per person before property costs – weighed against savings, which might be reaped over a much longer timeframe, have at times deterred departments from pursuing ambitious relocations.’

The report also warned that while remote working has been shown to be effective during the pandemic, it could harm career progression and quality of work in the longer term.

It said: ‘The government cannot assume that because civil servants have managed to continue providing services and developing policy through remote working during the pandemic, the career disadvantages of being located outside London have been removed.’